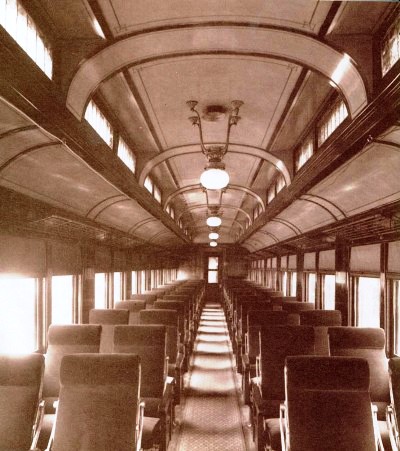 Of course, there had to a be a downside, too. And indeed there was, in the form of a growing uneasiness among Americans about the ownership and management of the nation's biggest business -- which the railroads had collectively become -- being concentrated in the hands of a relative few. How much power was too much? Was government regulation or control necessary, or were market forces the best way to keep these empires in check? Widely talked about by citizens and politicians alike, and discussed in books such as "The Railroad Question," these were issues that would not go away in the first decades of the twentieth century.

Before the turn of the century, railroads were engaged in an ongoing process of innovation, expansion, and consolidation. Railroads shaped the nation, and were in turn shaped by it.

The new century was no different in a basic sense; the changes continued. But while some of the changes offered promise others seemed of less use, at least to the railroads. There were even innovations that, down the road, would pose competitive threats to railroads, though these were largely unrecognized at first.

Consider the telephone, for instance. In the early 1900s it was supplanting the telegraph on American railroads. The idea was the same -- electrical impulses carried over wires -- yet "telephony" represented a way to make these transmissions accessible to everyone. Previously, the station agent in many small towns was often the only person who had the "power" to translate telegraphic messages sent in Morse code.

The telephone held tremendous possibilities for business as well. It offered a way to communicate in real words, in real time -- and at a moment's notice. Some observers speculated that there would be less need for traveling and face-to-face meetings in the future; there was even the possibility that telephones might prove useful in the home.

The internal-combustion engine also held promise for railroads. As early as 1890, a primitive 18-horsepower gasoline engine was used near Chicago to demonstrate the usefulness of self-propelled railcars. Just after the turn of the century, primitive gas-mechanical and gas-electric cars (the distinction being manifest in the transmissions) were built for such railroads as the Erie, the Pennsylvania, the Union Pacific, and the Southern Pacific.

As it turned out, self-propelled cars offered savings in the form of labor, but were generally quite troublesome to keep functioning properly. The gasoline engine would turn out to be better suited to the personal automobile, which was also being developed at this time.

Then there was the diesel engine. In the early years of this century, the diesel -- named for Rudolf Diesel, its German inventor -- was already being put to work in a variety of industrial uses.

The Corliss Engine Works, considered the world's largest in 1902, ran its huge manufacturing plant entirely with diesel power. Brewer Adolphus Busch built the first diesel engine constructed in America for use at his brewery, eventually forming a new firm, Busch-Sultzer, to manufacture diesel engines for American and Canadian users. Even mighty American Locomotive Works, the nation's second-largest builder of steam locomotives, had tested the diesel with favorable results. Still, it would take American locomotive builders another quarter of a century to begin a serious program of building and testing these prototype designs.