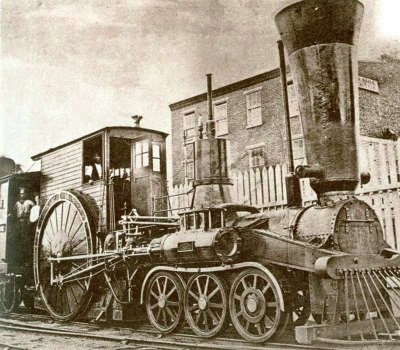 Railroaders were practical men. But some antebellum locomotives, like this 6-2-0 built by the Camden & Amboy, were spectacular oddities as well as miserable failures.
Railroad Museum of Pennsylvania

No one actually "invented" the railroad, nor can any one place claim its birth. Ancient Corinthians cut grooves in stone pavement to guide wagon wheels, as did the Romans. In late-medieval Central Europe, miners crafted tramways (later, "tramroads") with crude wooden wheels rolling on equally crude wooden rails. By the 1500s, tramways were in use in Germany and Great Britain, and by the time of American independence there were hundreds of miles of fairly sophisticated tramroads and railroads operating throughout the mining districts of England and Wales, using gravity and animal power. A man by the name of Richard Trevithick built the first successful steam locomotive in 1804, operating it on the Penydarren tramroad in Wales.

By 1825 and the opening of the Stockton & Darlington Railway in northern England, there was little doubt that the combination of iron rails, steam locomotion, and trains of cars would develop rapidly as a form of freight and passenger transportation. Nicholas Wood's "Practical Treatise on Railroads," published in 1825, was widely read and available to interested Americans. The success of Robert Stephenson's locomotive "Rocket" at the 1828 Rainhill Trials held by the Liverpool and Manchester Railway proved the potential of steam power. Present at that contest -- which pitted the most novel and advanced locomotives of the day against each other -- were representatives of America's earliest railroads. Ross Winans of the Baltimore & Ohio Railroad and Horatio Allen of the South Carolina Railroad watched attentively as the "Rocket" raced by with heavy trains at what to them were dizzying speeds. They returned to the United States with the conviction that railroads were exactly what the new nation needed.

There were at least a few quarry tramroads in the United States by 1800, and well-known examples were in use outside Philadelphia and Wilmington by 1810. As early as 1812, Revolutionary War veteran and indefatigable promoter Colonel John Stevens published a pamphlet entitled The Superior Advantages of Railways and Steam Carriages over Canal Navigation. By 1815, he had secured a charter from the State of New Jersey to build a tram-road -- in effect, an early, common-carriage railroad -- from Trenton, on the Delaware River, to New Brunswick, at the head of tidal navigation on Raritan Bay opposite New York City. In 1825, Stevens made a demonstration "steam waggon" to operate on a circular wood track in Hoboken. He and other visionaries, such as Oliver Evans, planted the seeds that eventually found fertile soil in the United States.

The British tended to build railways as a complete unit. American practice often involved building a lightly constructed line to open the railroad for business, then returning as money and traffic warranted to improve and finish the work.
Railroad Museum of Pennsylvania

From the handful of railroad charters granted by state legislatures in the late 1820s, the number of railroads proposed or under construction increased rapidly through the 1830s. At first, large cities wanted railroads to connect with other cities or improve their status as trading centers. Then smaller cities and towns clamored for a railroad link that would join them to emerging trunk routes, and before long, population centers of all sizes at least dreamed of having some kind of railroad connection.

Track mileage in 1830 totalled around 100, with several thousand miles of track planned or under construction. That compared with roughly 1,300 miles of canals in use and several thousand miles of established river routes. Just 10 years later, the number of railroad and canal miles were almost identical-a little over 3,300 for each-but few people were promoting canals in 1840. Instead, despite the financial panic of 1837 and a general lull in business, tens of thousands of miles of railroad were under construction in all settled parts of the country. The railroad had arrived on the American scene.