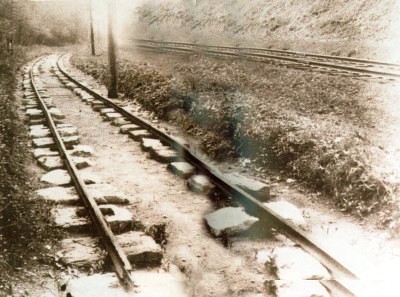 This bypassed section of the Camden & Amboy Railroad in New Jersey survived as an example of early 1830s railroad track. Like English iron rails of the time, they were supported by stone blocks, which made a sturdy but expensive railroad.
Railroad Museum of Pennsylvania

The first two decades of railroading were a period of experimentation and rapid technological evolution. By the 1820s, the United States could claim a small but competent group of surveyors, engineers, and builders with experience constructing roads, canals, and bridges. The field of civil engineering did not yet exist, but the U.S. Military-Academy was training military officers as engineers based on the well-established French engineering curriculum.

To assist in locating and developing our first railroads, the federal government often permitted these military engineers to assist railroad companies. Other needed skills came from wagon makers, millwrights, stonemasons, and machinists familiar with the crude marine steam engines of the day. In fact, almost anyone with a craft, or experience with machinery or construction, found opportunity in railroading.

There were fundamental questions to be answered. Should the flanges be on the inside of the wheels, or the outside? Should rails be of wood, iron, or of more permanent stone? Were steam locomotives practical for US. railroads? Should railroads minimize curvature at the expense of grades, or vice versa? Some of the best engineering minds of the day soon began devising answers. Jonathan Knight, a skilled mathematician and engineer, made calculations as to the rolling characteristics of railway vehicles and proposed a wheel with a slight taper to the tread-the shape still in general use.

Although initial costs were high, stone bridges were a better investment than timber ones because they required much less maintenance and were impervious to fire.
Railroad Museum of Pennsylvania

­The versatile Robert Stevens of New Jersey (John Stevens's son) conceived of the "T" rail design that is still the standard for American railroads. Inventions such as the swiveling four-wheel truck, designs for switches and turntables, and all sorts of basic engineering challenges kept these pioneers busy for years. Many railroads paid dearly for their initial mistakes, with the entire country watching. But even mistakes provided valuable lessons.