Labor on the Old Railroads 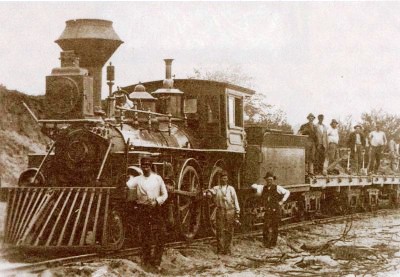 This view captures the unfinished quality of many antebellum railroads. The crew in the foreground is almost certainly American-born; the men on the flat cars are almost certainly immigrants making a dollar or two for a twelve-hour day.
Railroad Museum of Pennsylvania

In those days, almost anyone could find work on the railroad. The hardest, lowest-paying jobs were in railroad construction. Shovels, wheel barrows, mules, and black powder were the primary tools with which hundreds of thousands of men moved millions of tons of earth. With axe and adz they transformed countless trees into ties, bridge timbers, and lumber for cars.

Often, immigrants from Ireland, Germany, and other northern European countries drifted from one railroad job to another, supporting their families as best they could. In the South, both slaves and free men worked to build and maintain railroads. Surprisingly, women also found work on the railroad in these early years. Most often they worked as charwomen in railroad buildings, car cleaners, cooks at railroad eating houses, and doing other traditionally "women's" work that paralleled their duties in the home.

A few lucky men had skilled railroad jobs as machinists, painters, carpenters, boilermakers, and similar craft-oriented occupations. Almost all companies started apprentice programs, and railroad jobs were often handed down from father to son or uncle to nephew. Train and engine service carried with it high status and considerable risk. Locomotive engineers in particular were heroes to the general public and small boys alike, and the conductor was a man of great authority who had charge of the train as a captain does his ship. To attain those coveted positions, men had to work their way up from the bottom, starting as brakemen or engine wipers and serving an indefinite apprenticeship.

Brakemen performed especially hazardous work. They had to ride the tops of freight cars in all weather for as long as it took to traverse the standard 100-mile division. Sometimes railroaders were required to go right back out on another run, working 20 or 30 hours straight. The toll of death and injury was great, as it was in many mining and industrial occupations.

Railroaders accepted those risks for a number of reasons. Above all, railroading was one of the first industrial occupations to offer the possibility of lifetime employment. If a man followed the rules, served faithfully, and was careful for his own safety, he might have a well-paying job for life. That was an almost revolutionary development for the common working man, who at this point in history was accustomed to working on a daily basis and experiencing feast or famine -- literally -- for the effort.

This decorative flask from the late 1820s is typical of the souvenirs and commemorative objects produced to mark the opening of the "Railway Age" in North America.
John B. Corns

Railroaders also took great pride in their craft and their role in building up the country. Too often overlooked in the scholarly studies of railroad work is the fact that railroading could be downright enjoyable. Compared with repetitive factory work or following a mule and plow for a lifetime, railroad work offered genuine challenge, the chance for meaningful advancement, and a constantly changing work environment.

As railroads grew larger throughout the antebellum period, the basis of railroad employment shifted from traditional crafts and paternalistic relations to a more hard-nosed and impersonal style of industrial relations. In response, railroaders began banding together for their own protection. Early railroaders' mutual benefit societies-insurance plans-emerged in the 1850s as the men found it difficult or impossible to secure regular insurance. Those voluntary societies formed the nucleus of the major railroad craft unions that would emerge after the Civil War. The companies regarded any kind of activism as treason, and they responded swiftly with dismissal, fines, imprisonment, or blacklisting, depending on how powerful that particular company happened to be.