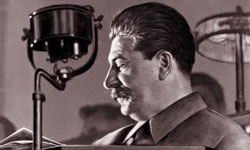 Joseph Stalin, pictured here in 1944, ruled the Soviet Union through World War II and until his death.
Laski Diffusion/Getty Images

The marriage between the USSR and Germany soon soured, and Germany took the whole of Poland and a swath of eastern USSR that extended nearly to Moscow. This meant that in 1944, as the Third Reich crumbled, the USSR was particularly enthusiastic about sticking it to its one-time ally. The bloody task of chasing Germany from eastern USSR and Poland lasted from June 22 to Aug. 19, 1944 and was called Operation Bagration.

In a way, it was the ultimate table-turning on the German forces. The USSR's push through Poland coincided with the Allies' push through France, which meant that German forces had to fight ahead and behind -- just like Poland had been forced to do in 1939.

In fact, the operation was the manifestation of an interesting, fairly new Soviet strategy called Deep Operations (among other names). With this strategy, instead of consolidating their hold on wide areas of land taken from Germany, Soviet troops stayed relatively narrow in order to push deep into German territory. Striking deep at the heart of Nazi Germany, the Soviets hoped, would do more strategically than consolidating gains at the edges.

So it was that in mid-August 1944, the Soviets reached the outskirts of Warsaw, Poland, just as the Polish resistance had itself risen up against the Nazis. All told, Operation Bagration took 350,000 German and 765,000 Soviet troops [source: History.net]. But even with the Third Reich in its death throes, it would take many more thousands of Allied and Axis lives before the war ended.