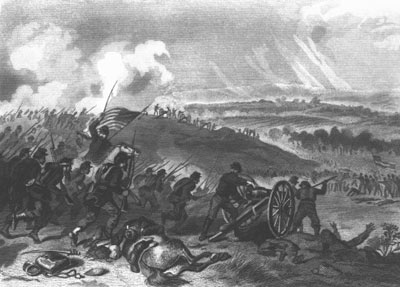 There's a circle of Civil War enthusiasts who focus on the what-ifs in the war. Some call it the "Confederate Fantasy" -- historians hypothesizing that if some event or person had been different, the Confederacy would have won the war. One of the most popular of these is "What if Stonewall Jackson had lived?" Some hard-core "the South will rise again" fans think the Confederacy never would have lost Gettysburg and the war.

Jackson, considered one of the best military minds around and Robert E. Lee's most trusted general, had been killed by friendly fire in the previous major battle, at Chancellorsville. Some historians theorize that had he been alive, he would have been an invaluable counsel to Lee at Gettysburg.

Instead, Lee's other trusted general, James Longstreet, was in charge. There was quite a bit of controversy at the time over Longstreet's role in the Confederate loss at Gettysburg (in fact, it's still being debated). We know that Longstreet favored a defensive strategy -- he wasn't a fan of the Confederate victory at Chancellorsville, which cost the Confederate Army 12,000 men it couldn't afford to lose. This discontent may have led to a further rift with Lee over strategy. One of the most famous Civil War books, Michael Shaara's semihistorical novel "The Killer Angels," later made into the movie "Gettysburg," depicts Longstreet as a wise general who did the best he could with seemingly impossible orders from Lee. However, some historians (and some of Longstreet's men) contended that Longstreet willfully disobeyed orders or, at the very least, acted on Lee's orders too slowly.

­Some historians say that the battle would have turned out very differently if Jackson had been in command because he might have either been able to talk Lee out of the strategy or would have acted more quickly and effectively than Longstreet did.­

Why wouldn't Lee back down?

While there is certainly controversy surrounding Longstreet's commitment to Lee's order to attack at Gettysburg, there is no doubt that he proposed alternatives to Lee all three days of the battle. So why didn't Lee listen? After big wins at Chancellorsville and earlier at Fredericksburg, Lee may have felt that leaving Gettysburg would have been considered a demoralizing retreat. Additionally, Lee knew he needed a big victory in the North to force Lincoln to consider peace, and he may have seen Gettysburg as his only real opportunity.