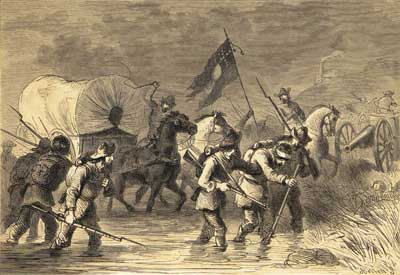 The defeated Confederate Army (under the command of General Robert E. Lee) retreats from the battlefield after the Battle of Gettysburg, July 4, 1863.
Hulton Archive/Getty Images

By taking control of Vicksburg, Grant concluded a Western campaign that reclaimed the Mississippi River, a vital trade route, for the North. Additionally, it helped to cut the Confederacy in two, which made supplying the Southern troops that much more difficult. It's often overshadowed by Gettysburg's more symbolic victory, but Vicksburg may be the real reason July 1863 is regarded as the turning point of the war.

Regardless, the Civil War continued for another two years. The South would win more battles, but Lincoln's new general, Ulysses S. Grant, was much more willing to play the numbers against Lee, which the previous line of generals had been unwilling or unable to do. While considered a butcher by some, Grant would not back down after a Union defeat -- he would simply regroup and continue pursuit. He was unlike anyone Lee had faced before, and it would eventually spell the demise of the Southern Army and the Confederacy.