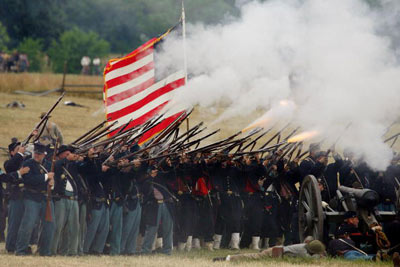 In terms of location, [url='399110:0']Gettysburg was not planned by either side. Robert E. Lee had brought his army over the Potomac River into Confederate-friendly Maryland and on to Pennsylvania to invade the north. That way, Northerners would have to see the war firsthand, and they might force Lincoln to end it. Lee's plan was to capture Washington and finally get Europe to officially recognize the Confederacy. Up until that point, most of Europe had been tentatively staying out of what they considered a domestic squabble. While the English secretly traded with the Confederacy, they were not willing to provoke the United States by officially recognizing the Confederacy as a separate country. The South needed this recognition to get money from Europe to further finance the war, the new government and the Southern economy.

While in enemy country, the Confederate army was having an even tougher time outfitting and feeding its troops. Confederate Maj. Gen. A.P. Hill, in desperate need of shoes for his men, pursued a lead that there were shoes in Gettysburg, Pa., just over the state line from Maryland. Quite a few roads crossed in Gettysburg, and the Confederates approached the town from the west. They weren't aware that the Union cavalry was also in town, with the rest of the Union Army only a few miles away. To the south of town lay the hills that would make all the difference in the battle -- the high ground that both armies wanted to fight on for protection and the best view of their enemy's position.

Another controversial what-if of the Battle of Gettysburg is "What if Lt. Gen. J.E.B. Stuart had been in contact with Lee?" Stuart led the Confederate cavalry, known as the eyes and ears of the Southern army. He had humiliated more than one Union general by riding around the entire Army of the Potomac with his troops, providing Lee with information on its whereabouts and strength. Stuart was on one of those rides as the Battle of Gettysburg began but was unable to send messages to Lee. He was surprised to learn that the Union army was even on the north side of the Potomac River, much less so close to the Confederate Army.

­In the next section, we'll discuss what actually happened on the battlefield during the Battle of Gettysburg.