by John Donovan
Next
Ulysses S. Grant served as the commanding general of the Union Army during the Civil War, and later as the 18th president of the United States. Library of Congress/HowStuffWorks

The 19th-century historian Henry Adams once said of Ulysses S. Grant — beloved Civil War general, 18th president of the United States, and a frequent target of Adams' potshots — that Grant made for a "great" soldier, but a "baby" politician.

Historians have been debating his place in the presidential pantheon ever since.

In his time, Grant was an enormously popular public figure, the leader of the Union Army, the hero who won the war for the north. He was the man who saved the nation. As president, he served two terms and could have been reelected to more (as was allowed then). When he died in 1885, more than 1.5 million people attended his funeral in New York.

But his presidency, to many, was indelibly marred by political infighting, scandals, Grant's well-known drinking problem, and the overwhelming burden of bringing post-war America together through Reconstruction. Only in the past few decades have historians begun to look more kindly on the reluctant politico. In a completely arbitrary but well-known ranking of presidents, C-SPAN's Presidential Historians Survey, Grant's jumped 11 spots since 2000, more than any other chief executive. C-SPAN's panel of 91 historians now places him 22nd overall, just below John Quincy Adams (historian Henry's great-grandfather).

"I would look at him as the general that saved the union and the president that managed to preserve the union. He was an essential president," says current-day historian Joan Waugh, the author of "U.S. Grant: American Hero, American Myth," a 2009 biography. "This is a man who we should identify with today. He had his ups and downs in life, for sure ... and yet every obstacle he encountered, he found a way to get through it. And that in itself is admirable."

Grant was an enormously popular public figure as the leader of the Union Army.
Library of Congress

From Battlefield to Oval Office

Many presidents have been former soldiers, though few have been as successful as Grant. In fact, George Washington and Dwight D. Eisenhower are maybe the only presidents who would outrank him. The three are often lumped together as the prime examples of commanders-turned-presidents.

Each of them struggled in moving from the structured, straightforward ways of the military to the often back-slapping and back-stabbing ways of Washington. "Soldiers who go into politics usually get deeply frustrated," says historian H.W. Brands, the author of "The Man Who Saved the Union: Ulysses Grant in War and Peace," a 2012 biography. "War is an arena of coercion ... In politics, in peace, you have to use the tools of persuasion. The important people, in a president's universe, are people he can't order around."

Indeed, in his first attempt at a post-war career, after the Mexican War, Grant flopped. But he took the lessons learned then, and from his bloody but victorious tour through the Civil War, and applied them when he reached the White House.

"He was better as a civilian president than he had been as a civilian insurance salesman, surveyor, farmer or whatever during the 1850s. He had gained a great deal of confidence during the Civil War. He realized that he had these abilities that he really didn't appreciate before the Civil War," Brands says. "The other thing was, he was a national hero, and that does carry a lot of weight in politics. So even if you're not the master of policy detail, when you know that people elected you — by a landslide in 1868 and again by a somewhat smaller margin in 1872 — you have the authority that comes from being the only person in the United States to represent all of the voters of America."

As all presidents do, Grant faced plenty of opposition. His came mainly from states in the vanquished South, which balked at accepting former slaves as equals (rights granted in the 14th and 15th amendments) and bristled at Reconstruction.

Scandals pervaded his administration, too. The worst was the Whiskey Ring of 1875, in which a group of distillers was accused of dodging taxes. Grant's personal secretary, Orville E. Babcock, was indicted in the political tempest but acquitted when — extraordinarily — Grant testified against his own federal government on Babcock's behalf. It was the only time in history that a sitting president testified voluntarily as a defense witness in a criminal trial. Babcock was acquitted, but more than 100 others were convicted.

The most dogged criticism of Grant, something that followed him through much of his life, was that he was a drunk. Historians have found much to show that he had an alcohol addiction. The widely held perception that he was a falling-down mess, though, is sketchy. Abraham Lincoln, one of his many admirers, addressing rumors about Grant, reportedly said, "[I]f those accusing General Grant of getting drunk will tell me where he gets his whiskey, I will get a lot of it and send it around to some of the other Generals, who are badly in need of something of the kind."

Still, the negative image of Grant advanced by historian Adams — who was enraged by Grant's cabinet picks — and other would-be leaders persisted throughout the 20th century.

"Reconstruction was considered a failure for many decades because of Grant being portrayed as a military dictator, bringing troops against the helpless white south," Waugh says. "You didn't need to know anything else about him except he was a drunk, a military butcher, and an incompetent, corrupt president."

This image shows Ulysses S. Grant reading a newspaper at his home in Mount McGregor, New York. It is the last photo ever taken of Grant, just four days before his death in 1885.
Library of Congress

A New Look at President Grant

These criticisms that Grant endured, during and after his presidency, often masked his successes. "The new work on him shows quite well that he learned as he went along," Waugh says, citing books by Brands, Ronald C. White, Charles Calhoun, Ron Chernow, and others. "He learned how to be a politician."

Grant worked for rights for both African Americans and Native Americans, and pushed for the Ku Klux Klan Act of 1871. He declared martial law and sent troops into South Carolina to enforce the act, which itself was meant to enforce the 14th Amendment. Thousands were indicted, and around 600 Klansmen were jailed in late 1871 for terrorizing African Americans.

His efforts at a complete Reconstruction may have fallen short, certainly by 21st century standards, though expecting a seamless reunion after a divisive and costly war probably was unrealistic. Many now recognize that preserving the union, in itself, was a remarkable accomplishment.

"The goal of the war, for most white northerners who were the majority of the population, was reunion — the Union preserved," Waugh says. "That was considered a great accomplishment. For a country to engage in a Civil War in which 600,000-plus were killed, and the destruction that it wrought, and then come back together again was considered the best thing."

Grant — a man small of stature, quiet and modest — may not have been what Adams and others expected. But, at that time, he may well have been exactly what the country needed.

General Tecumseh Sherman, who is known for torching munitions factories, clothing mills and railway yards during the Atlanta Campaign, which left Atlanta in ruins during the infamous March to the Sea, was Ulysses S. Grant's most trusted officer during the Civil War. 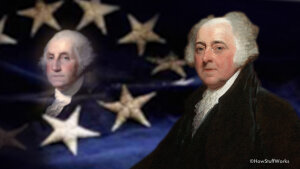 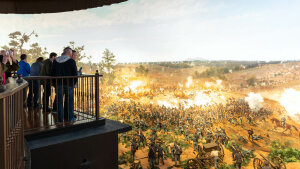