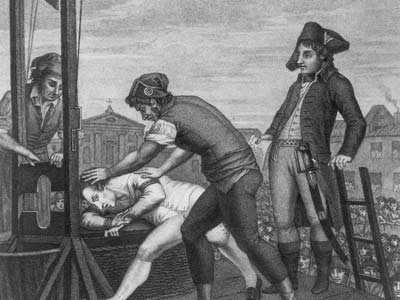 Robespierre, heading to the guillotine, was influenced by Rousseau.
Rischgitz/Getty Images

The American Revolution rebelled against monarchy and the institution of the church, backed by Enlightenment theories. A proliferation of pamphlets and essays, including Thomas Paine's "Common Sense," publicized the movement for independence in true Enlightenment fashion. Thomas Jefferson, Alexander Hamilton, Benjamin Franklin and other framers of the Constitution adhered to the philosophies of rationalism over religion, skepticism over belief and democracy over absolutism. Liberty through the separation of powers woven into the founding documents reflects Montesquieu in particular [source: Modern History Sourcebook].

Perhaps because it happened away from Europe on a real tabula rasa, the American Revolution succeeded. The events that happened in France a decade later didn't turn out so well. On July 14, 1789, the newly formed French National Assembly stormed the Bastille and started a revolution. The reaction in the United States was mixed. Some Americans saw it as a European reflection of their own struggle for nationhood; others eyed the coup with great concern [source: Staloff].

The writings of Rousseau deeply impacted Robespierre, the leader of the radical Jacobin Party [source: Halsall]. According to the philosophe, people should abide by the social contract of general will tempered by sovereignty. From there, it's up to the government to bestow liberties unto the people. An extreme manifestation of Rousseau's social contract emerged as the Revolution spiraled out of control. Consider, for instance, the Reign of Terror when Jacobins seized control. The general will had spoken at the Bastille storming, and it was up to Robespierre to administer freedoms. From 1793 to 1794, the Committee of Public Safety killed off thousands, including Marie Antoinette -- all in the name of liberty.

After the dust settled on the political dramas at the end of the 18th century, the extreme rationalism and skepticism espoused by the Enlightenment had reached a limit. Some people didn't wish to peer at human nature through the microscope of reason. Romanticism arrived as the antidote. The era that started with Newton's "Principia" closed with the publication of Wordsworth and Coleridge's "Lyrical Ballads" in 1798. In it, the poets wrote that "not by the intellect, but the deep power of joy, we see into the life of things" [source: Wordsworth and Coleridge].

Voltaire would've shuddered at the thought.