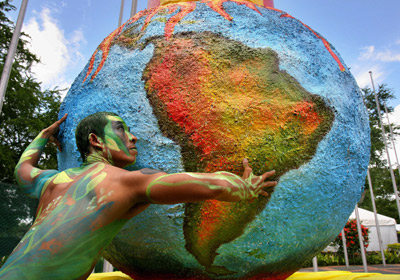 The origins of "America" are bit obscure. A dancer performs next to a globe during the UN Climate Change Conference in 2007.
Jewel Samad/AFP/Getty Images

When it comes to the etymology of continent names, it seems logical that they would be named after the people who discovered them. In fact, the precise origins of the names are difficult to prove. In most cases, experts have only conjecture to go by, often drawn from early writings and maps. One notable exception is Antarctica.

It's surprising to have a modern newspaper article reporting the naming of a new continent; but in the case of Antarctica, we do. A New York Times article dated March 13, 1904, describes the naming of the frigid land at the South Pole [source: New York Times]. First described as a continent by Sir John Murray in the late 1800s, explorers confirmed the designation in 1904 and set about naming the latest addition to the map. Geographers took their cue from Murray, who had suggested "Antarctica," a combination of "ant" (opposite) and "arctic" (of the North Pole).

The origins of "America" are hazier. Most of us learned that the Americas were named after European explorer Amerigo Vespucci, who was the first to recognize the area as a previously unknown land mass. Christopher Columbus, until his death, believed he had come ashore at the East Indies. Vespucci, who came afterward, rightly believed Columbus had stumbled upon a different land altogether.

North and South America may indeed have been named for Vespucci; that's the most widely accepted theory. It makes sense: Amerigo Vespucci was the first to recognize that the land Columbus discovered was an entirely different continent. Also, the creator of the first known map to label the continent "America," German cartographer Martin Waldseemuller, actually explained that he was using the name in honor of Vespucci. This map is dated 1507.

Still, there are other theories. One states that the term comes from the Ameriqque mountains in Nicaragua. Experts believe that both Columbus and Vespucci visited these mountains after American natives clued them in that there was gold there. And gold is a significant driving force behind the discovery of new lands. A less convincing but more amusing theory ties the name to a British royal representative named Richard Amerike. Legend has it that the explorer John Cabot (who in 1497 was the first to sail to the New World under the English flag) received a very large reward upon his return to England, and it was Amerike who put it in his hands. The story goes that Cabot was so happy with the size of the reward that he named the continent for the man who gave it to him.

The name "Australia," for more concrete reasons, has likewise evolved into a bit of a mystery. Until recently, experts believed fairly definitively that the continent was named "Australia" by Matthew Flinders in 1802. Flinders was the first to circumnavigate the land mass, and he later created a map that named the continent Australia. The Latin "Australis" mean "southern." But now, experts aren't so sure it was Flinders who named the southern land mass. In the late 20th century, the National Library of Australia came upon a different document labeling the continent "Australia." This one was created by the German astronomer Cyriaco Jacob zum Barth in 1545.

Etymology is an inexact science, and the rest of the continent names have even hazier histories. The theories are very logical, though. Who can argue that Africa isn't "sunny" -- or, in Latin, "aprica"?

Since the first use of the name "America," Amerigo Vespucci has been viewed as a bit of a scoundrel. Some think he stole discovery credit from Christopher Columbus; some even claim he changed his name to "Amerigo" only after the continent was referred to as "America."

Others think America got its name by mistake, and Vespucci had nothing to do with it. The first person to create a map with the name "America" on the newly discovered land may have misunderstood Vespucci's role in the discovery, possibly after misinterpreting a letter written by Vespucci years earlier.