by Julia Layton
Prev NEXT
9 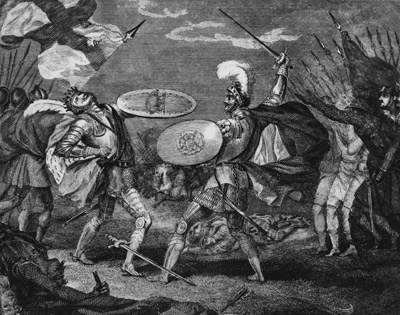 Edmund de la Pole had a fairly legitimate claim to the throne: He was the nephew and heir of King Richard III. Richard died at Bosworth Field at the hands of Henry Tudor who later became Henry VII.
Hulton Archive/Getty Images

King Richard III, Henry VII's pred­ecessor, was a member of England's York family. Henry Tudor, of important royal lineage on his mother's side, led a battle against the king in 1485 to take the throne. Richard III died on the battlefield, and Henry Tudor became King Henry VII.

Edmund de la Pole was of York family lineage on his mother's side: His mother was Richard III's sister. As King Richard III had died without an heir, the crown would've landed with the de la Poles if Henry VII hadn't claimed the throne -- Richard had named his nephew Edmund as his successor.

As a legitimate threat to the Tudor monarchy, de la Pole would've been in danger even if he hadn't taken the step to try to overthrow Henry VII. He left England for the Netherlands, where he temporarily gained the support of the emperor Maximilian in his quest to reclaim the thrown. But Henry VII ended up making a deal with the emperor, and Maximilian withdrew his support. Upon returning to England, de la Pole found himself branded a traitor.

In order to save his own life, de la Pole turned himself in to Henry VII's son, Prince Henry, who promised to merely imprison him. He kept his promise until he succeeded his father on the throne. To protect himself as king, Henry VIII ordered de la Pole beheaded in 1513.

But that wasn't the end of the Yorks. Henry VIII faced serious opposition from another man, a popular noble and powerful politician. Edward Stafford, Duke of Buckingham, sealed his fate when he spoke too much of his claim to the English throne.