10 Scapegoats Still in the Crosshairs 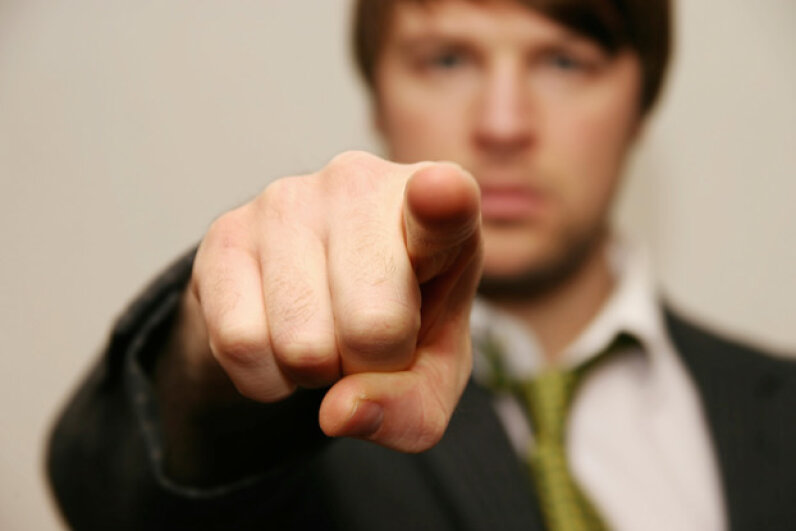 We humans are pretty good at pointing fingers at anyone other than ourselves. iStockphoto/Thinkstock

Humans love to play the blame game. Adam blamed Eve. Hitler blamed the Jews. When something bad happens, it's always someone else's fault. Such is the life of a scapegoat.

The practice of scapegoating is older than old. During Yom Kippur, the Day of Atonement, the Israelites used two goats to symbolize their sins. One was sacrificed to appease God, while the second was slain to pacify Azazel, an evil spirit. In an act of religious symbolism, a priest conveyed the sins of the Israelites to the goat meant for Azazel. The unlucky goat was then tossed off a cliff [source: Encyclopaedia Britannica].

The first human scapegoats were mostly convicts or other outcasts. They often were herded together and forced to march down the street imbued with the sins of the rabble. They then were forced out of town and stoned to death [source: Campbell].

Despite its long history, the word "scapegoat" apparently originated in 1530, when the Oxford-educated William Tyndale translated the Bible into English [source: Campbell]. Little did Tyndale know he would be called a scapegoat, too, when Thomas More blamed him for the Peasants' War in Germany.

Scapegoating allows humans to point the finger at others instead of accepting the consequences of their actions. These targets usually are outsiders, a person or group who can be readily dehumanized, and they come in all stripes: political, religious, artistic and sporting. Get ready to meet 10 of the world's most famous scapegoats. 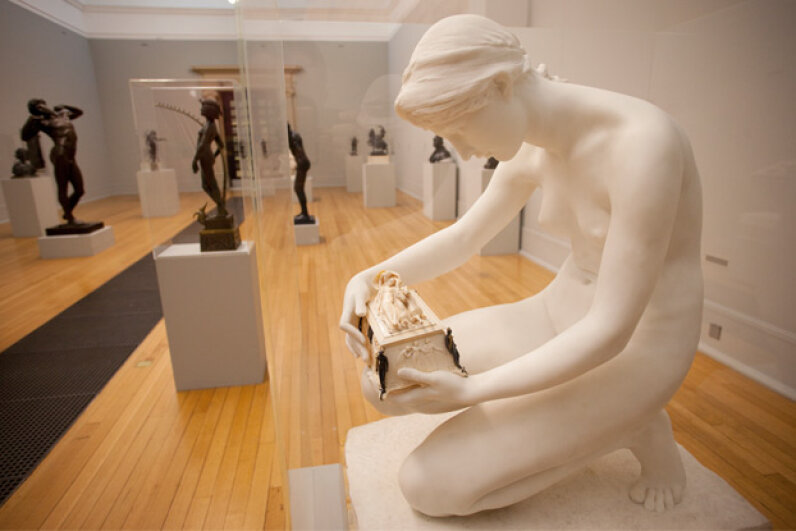 The moment before Pandora's curiosity gets the best of her is captured by artist Harry Bates in marble, ivory and bronze. The Tate acquired the sculpture in 1891. © Steven Vidler/Eurasia Press/Corbis

According to Greek mythology, Pandora was the first woman -- and the first scapegoat. Before Pandora came along, Earth was a happy place, free from turmoil and strife. There were only men around, each created by Prometheus, a god with a trickster reputation.

One day, Prometheus irritated the heck out of Zeus, the overlord of the Greek gods, by stealing fire from heaven and giving it to mankind. Zeus wanted revenge. He told Hephaestus to create a woman. Hephaestus, the god of the forge, obliged and molded Pandora out of clay. Before she arrived on Earth, Zeus gave Pandora a jar (the box revision came later) and told her never to open it. Zeus was a wily codger and knew Pandora's curiosity would be too much for her to handle. As expected, Pandora opened the jar, unleashing all the troubles humans face today [source: National Gallery of Art]. 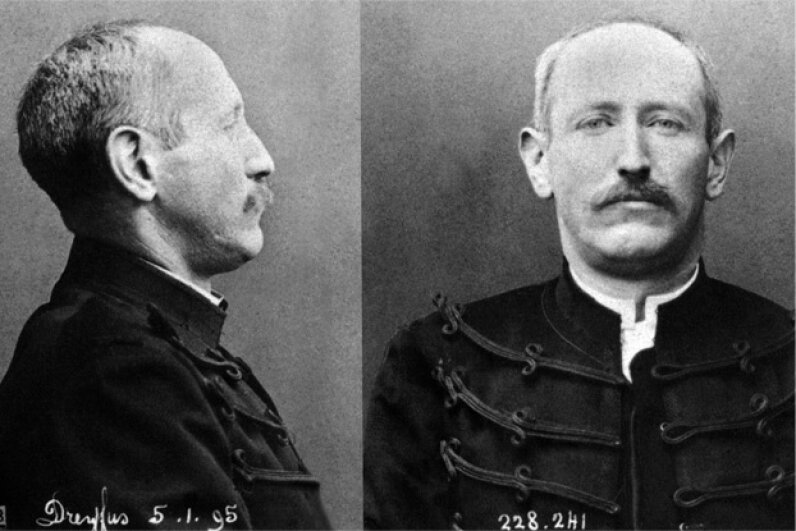 A stoic Dreyfus faces the camera at the time of his dishonorable discharge. Dreyfus, of course, would later be pardoned and proclaimed innocent, but not before his case bitterly divided France for years. Apic/Hulton Archive/Getty Images

Alfred Dreyfus, a captain in the French army, was the perfect scapegoat for those who hated Jews in the late 19th century. In 1894, the French discovered that a secret military document had found its way into the hands of Germany's military attaché in Paris. Although the evidence showed that French Maj. Ferdinand Walsin-Esterhazy had purloined the secret document and given it to the Germans, the leaders of the French army instead charged Dreyfus with treason.

At the time, France was a bastion of anti-Semitism. A secret court-martial found Dreyfus guilty, even though the evidence against him was scant. The government exiled Dreyfus to Devil's Island. However, bad publicity forced the army to grant Dreyfus a second trial, in which he was once again found guilty of treason. Dreyfus was sentenced to 10 years but was eventually pardoned. In 1906, a new French government proclaimed him innocent [source: Jewish Agency for Israel]. He even wound up serving the French army again during World War I. 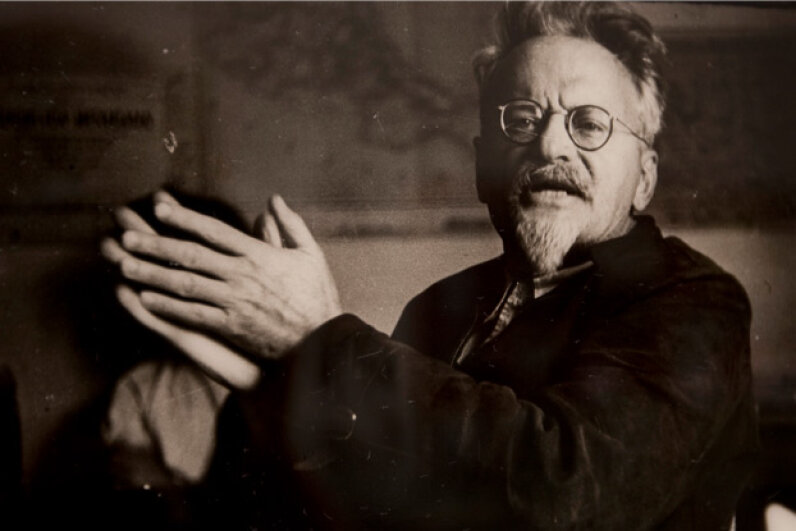 A portrait of Trotsky hanging in the Mexico City museum bearing his name. © Susana Gonzalez/dpa/Corbis

Scapegoats are nothing new in politics, and perhaps the most famous is Communist leader Leon Trotsky. The sharp-witted and charismatic hero of the Russian Civil War could have become the next ruler of the Soviet Union after Vladimir Lenin died – if it weren't for Joseph Stalin.

Stalin was ruthless and brutal, a leader feared by the masses. When Lenin died, Stalin took over the government. Trotsky, who believed Stalin had poisoned Lenin, denounced Stalin as an enemy of the revolution. Stalin responded by tossing Trotsky first from the party and then from the country. Trotsky, along with many of his friends and family, became a hunted man, but Stalin kept him alive for a while and used Trotsky as a scapegoat for the failures of Soviet society [sources: Hudson, Campbell]. 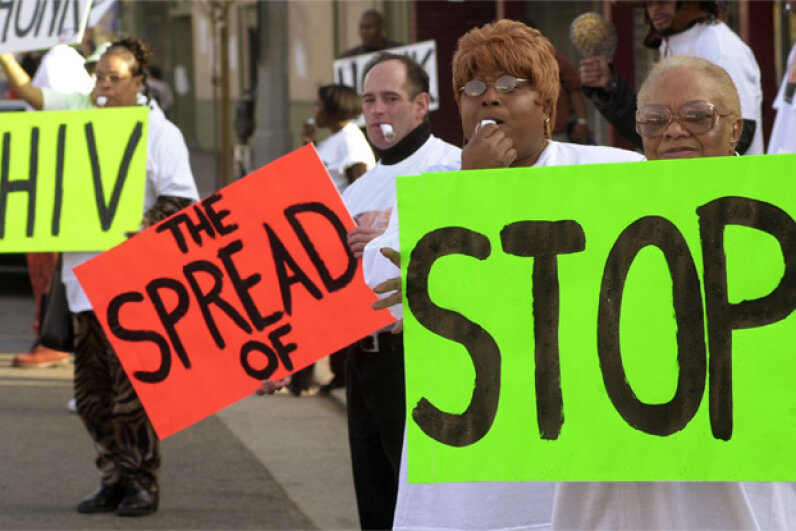 Los Angeles residents participate in a rally for National Black HIV/AIDS Awareness Day on Feb. 7, 2002. According to the World Health Organization, more than 1.7 million people died of AIDS-related illnesses in 2011. Steve Grayson/WireImage/Getty Images

His name was Gaëtan Dugas, but history knows him as Patient Zero. When the AIDS epidemic first stampeded across North America in the early 1980s, researchers were on the lookout for the unaware person, or persons, responsible for spreading the deadly disease, which was ravaging the gay community. Medical investigators from the Centers of Disease Control and Prevention ultimately tracked down Dugas, a gay flight steward from Canada, linking him to a number of AIDS cases in Los Angeles, New York and eight other cities.

Investigators implicated Dugas in 40 of the first 248 cases of AIDs in the United States. When he was told he was endangering his sexual partners — about 250 a year (and thousands of others indirectly) — he continued to have unprotected sex. Dugas died in 1984 [source: Henry]. Public health officials have noted that if Dugas hadn't spread the disease, some other person likely would have. 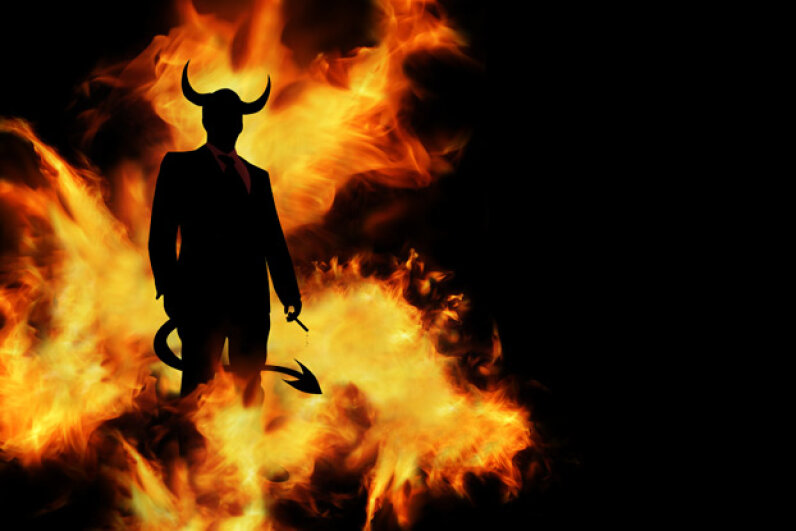 That guy made you do it? Really? That's the best you can come up with? Hemera/Thinkstock

It's hard to beat Beelzebub, more commonly known as the devil, as an accessible scapegoat. Wars, pestilence, drought, famine, natural disasters, you name it, Satan gets the blame. In Christianity, evil is synonymous with the devil, who, according to the Bible, was once an angel in heaven but ultimately fell from God's grace.

Over the centuries, the devil became history's favorite whipping boy. Perhaps all he needed was a defense lawyer as Mark Twain hinted:

All religions issue Bibles against him, but we never hear his side. We have none but the evidence of the prosecution, and yet we have rendered the verdict. In my mind, this is irregular. It is un-English. It is un-American. 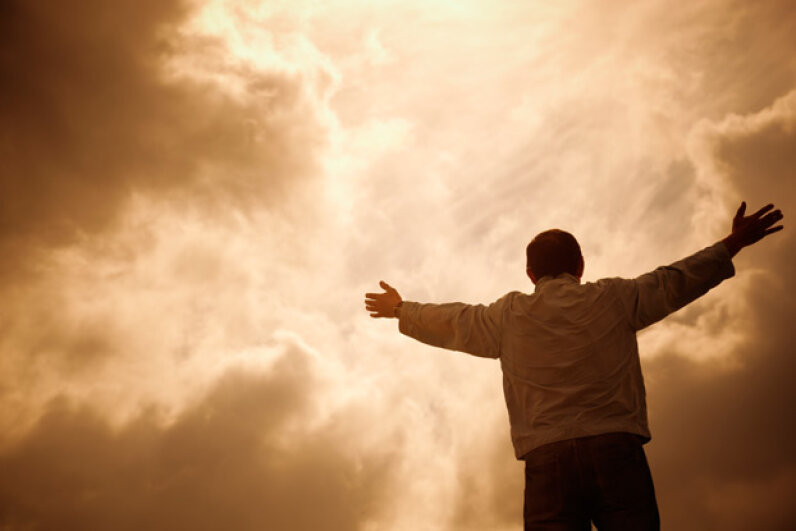 God has shouldered a fair amount of scapegoating throughout history. iStockphoto/Thinkstock

Conversely, God is also a convenient scapegoat. According to such logic, if God's so perfect, why does he allow bad things to happen?

In fact, as many as two-thirds of Americans surveyed have mentioned feeling angry with God if they are suffering. Julie Exline, a psychologist at Case Western Reserve University, studies how people focus their anger at God. People, she says, use God as a scapegoat when they don't get what they want [source: Dye]. And just as, say, committed spouses have to address their anger after an argument, people also need to resolve their anger with God, or risk letting it fester indefinitely. 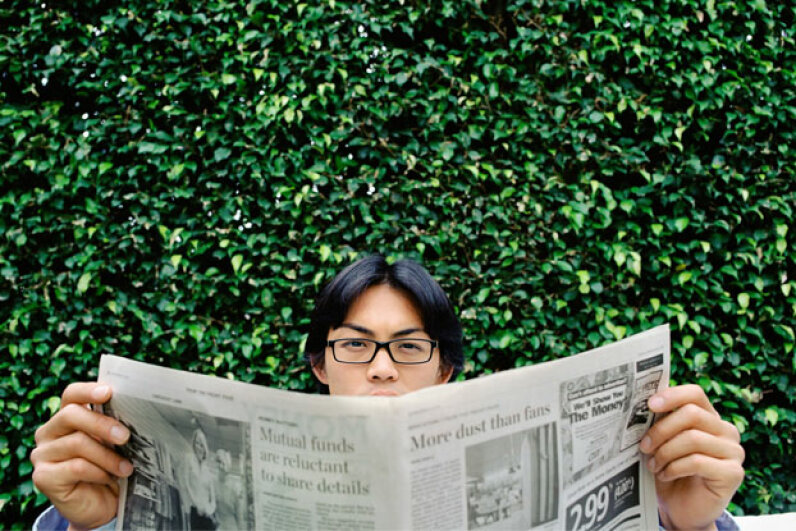 Humans consume news voraciously, but they also have a huge appetite for disparaging media outlets as inaccurate and biased. IS Stock/Valueline/Thinkstock

Blame the messenger. That's what the ancient Greeks used to do. Often when a ruler received bad news, he killed the person bringing him the bulletin, thinking that it somehow canceled the bad message. It never did.

These days, many Americans believe "the media" is the root of all evil, or at least a portion of it. It's no wonder. Most people say that media outlets are biased, inaccurate and influenced by the wealthy, which makes them, as a whole, a popular scapegoat. According to a 2011 poll by the Pew Research Center, 66 percent of those who responded say news stories are inaccurate, while 77 percent believe most news organizations favor one side over the other [source: Bedard]. 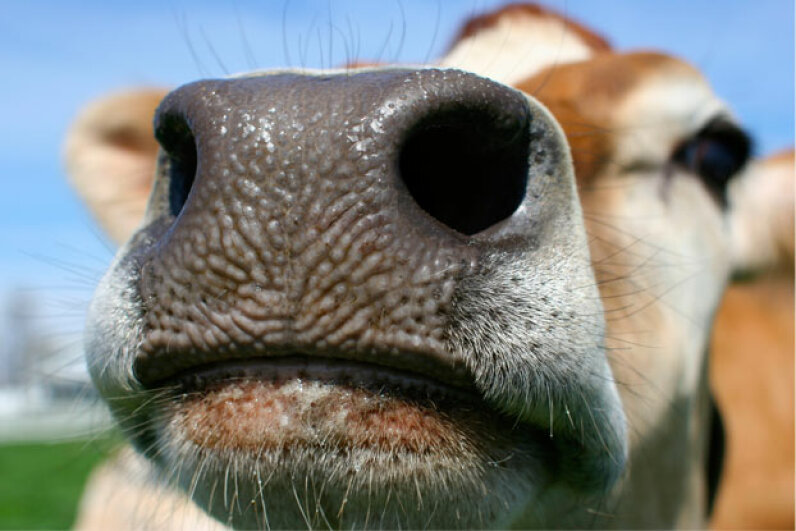 Read my lips: I didn't start that fire! iStockphoto/Thinkstock
Late one night, when we were all in bed,
Mrs. O'Leary left a lantern in the shed.
Her cow kicked it over
Then winked her eye and said,
"There'll be a hot time in the old town tonight!"

In 1871, a great fire engulfed Chicago killing nearly 300 people and destroying 17,450 buildings. For more than a century, Catherine O'Leary's cow has gotten the blame for the Great Chicago Fire. At the time, Mrs. O'Leary was a small dairy farmer who provided milk to her working-class neighborhood. According to legend, Mrs. O'Leary was late milking the cows that day. One of the cows responded by kicking over a lighted lantern. The fire quickly spread from building to building.

A reporter who was first on the scene reported the supposedly true tale of Mrs. O'Leary's cow, and a scapegoat (scapecow?) was born. Mrs. O'Leary went to her grave in 1895 bitter that most people believed that she had something to do with the conflagration. Apparently, her bitterness was grounded in reality. In 1997, a Chicago insurance investigator exonerated Mrs. O'Leary cow. While the fire did start in Mrs. O'Leary's DeKoven Street barn, the bovine wasn't the culprit. It was a careless pipe smoker — a neighbor of Mrs. O'Leary's — who discarded a match in the barn and set the city ablaze [source: McNamee]. 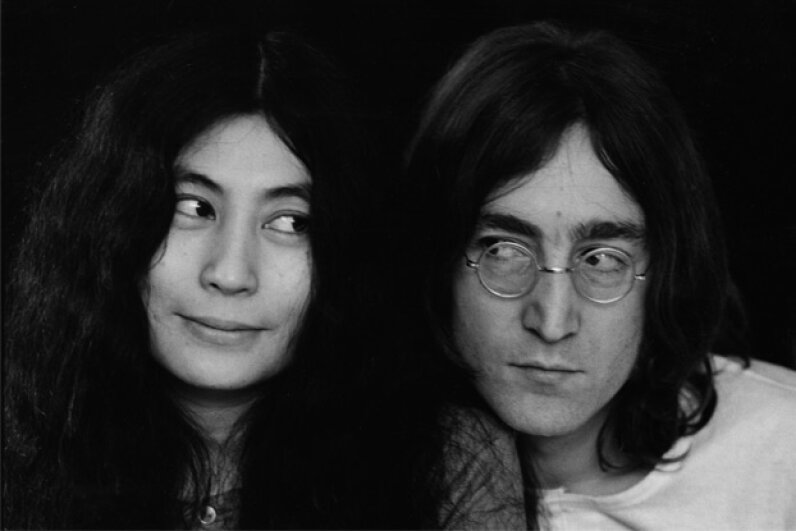 December 1968: Yoko Ono and John Lennon in happier times. The Fab Four wouldn't break up until 1970, and Lennon wouldn't be assassinated for another 12 years. Susan Wood/Hulton Archive/Getty Images

For many, the Beatles were the greatest rock band in history. When the Fab Four broke up in 1970, Yoko Ono, John Lennon's wife, shouldered the blame.

"I was used as a scapegoat, a very easy scapegoat," Ono told CNN's Anderson Cooper in 2010. "You know, a Japanese woman and whatever."

In 2012, Lennon's wingman, Paul McCartney, put the Yoko Ono scapegoat controversy to rest. In an interview with David Frost, McCartney admitted it wasn't easy having Yoko around all the time, but she was not responsible for the band's breakup.

"She certainly didn't break the group up, the group was breaking up," McCartney told Frost [source: Huffington Post]. 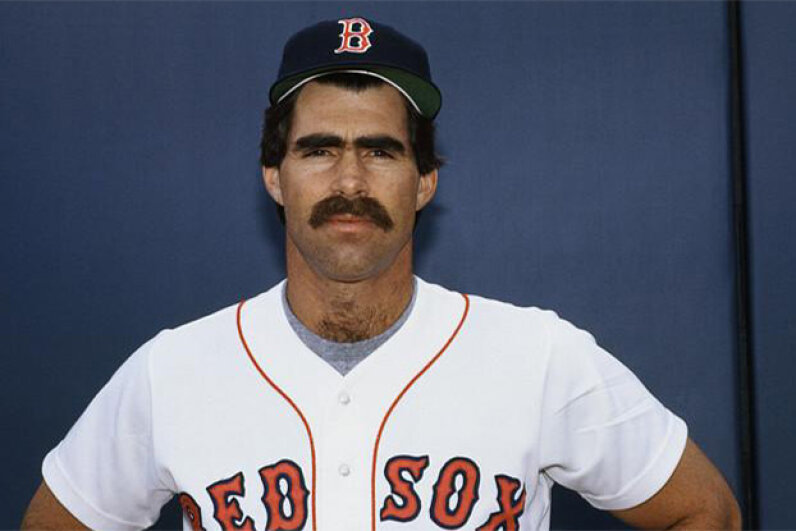 In the world of sports, no scapegoat is as infamous as Bill Buckner, the Boston Red Sox first baseman who booted a routine ground ball that cost the Red Sox their first title since 1918. Truthfully, it wasn't all Buckner's fault. Red Sox manager John McNamara should have benched Buckner, who was hobbled by injuries, late in the game as he had done previously. Moreover, Red Sox pitcher Bob Stanley should have shouldered most of the blame.

During Game 6 of the 1986 World Series, the Sox were leading the New York Mets three games to two. The game at New York's Shea Stadium went into extra innings. By the bottom of the 10th, the Mets were toast. The Sox were up 5 to 3 with two outs and no one on base. Then things unraveled horribly for the Red Sox. Three consecutive Met singles narrowed the gap to 5 to 4. With runners on first and third, Stanley came into the game to pitch to Mookie Wilson. Stanley pitched a wild one, allowing the tying run to score. Wilson later bounded a dribbler to Buckner. The ball went under Buckner's injury-riddled legs, allowing the winning run to score. The Mets won the game, and ultimately the Series [sources: Time, Barra]. 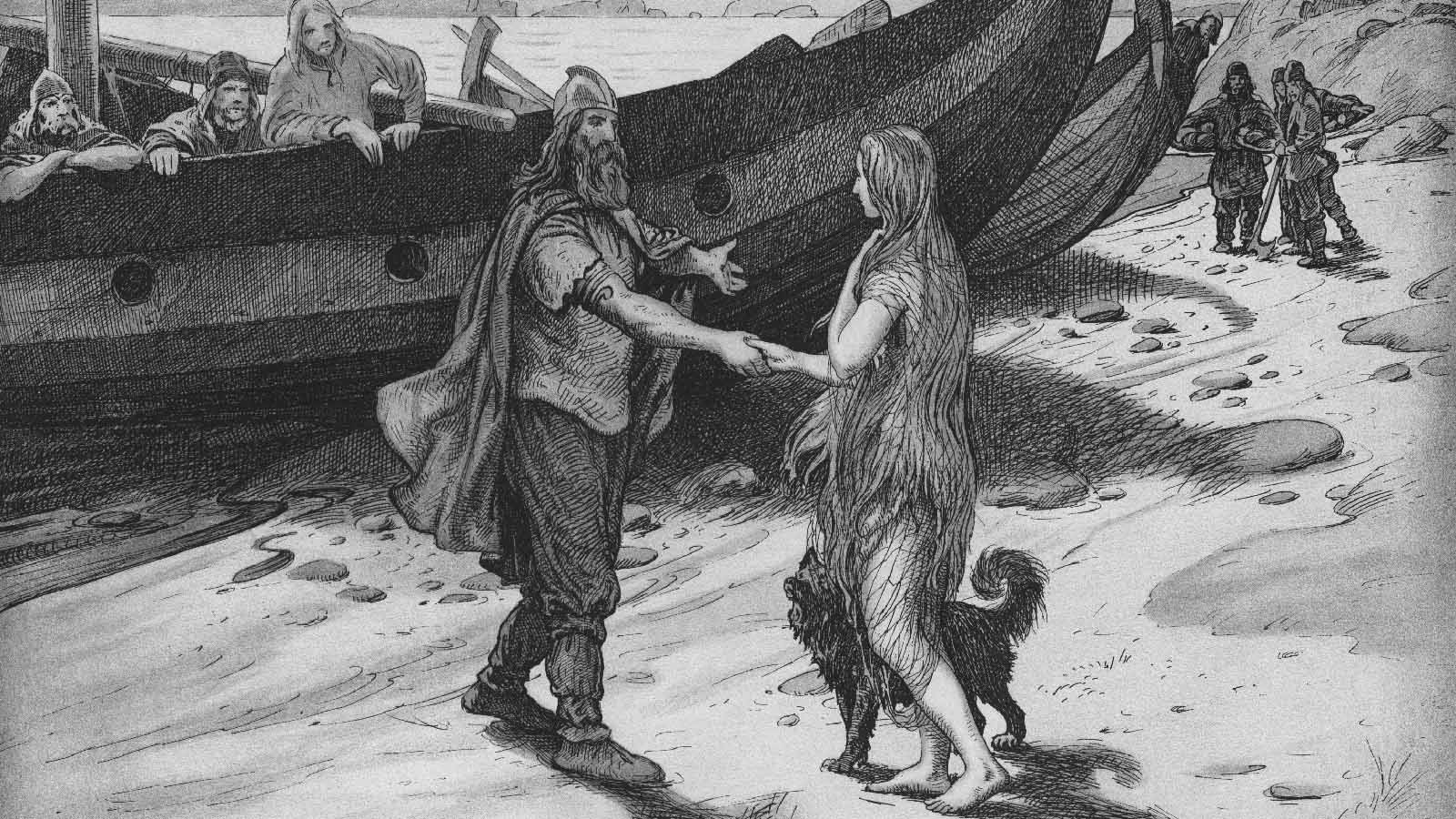 Who Was Viking Warrior Ivar the Boneless?

History says Ivar the Boneless was a ruthless Viking warrior. But why the name boneless? Was he truly disabled, or was there a another more sinister reason for the nickname?

Like everyone else, I play the blame game. When I hit the golf ball into the water, I blame the golfing gods. Most of the time I blame myself, but never the devil, and sometimes God. As for Pandora, I have a cat named Pandora, and for 14 years, I've never blamed her for anything.