Audie Murphy is still one of the U.S. Army's most decorated soldiers. He earned the Medal of Honor (far right), two Silver Star Medals (far left and second to right), the Distinguished Service Cross (second from left), the Legion of Merit (third from left) and three Purple Hearts (among many others). Public Domain/HowStuffWorks

Audie Murphy was a bona fide World War II hero, a term which, in these days of endless American conflicts, seems both antiquated and slightly offensive even. But in his time, Murphy — maybe the greatest war hero the country ever has seen — was an out-and-out superstar. He fashioned a grateful country's unbridled adulation into a career as one of Hollywood's biggest draws, most famously playing the lead role in his own film autobiography, "To Hell and Back."

Yet the war that made him famous, as is the case with many who fight, never left him.

"A hero is somebody who takes an abstract virtue and embodies it for a short time," says David A. Smith, the author of "The Price of Valor: The Life of Audie Murphy, America's Most Decorated Hero of World War II." Smith teaches history at Baylor University in Waco, Texas. "As human beings, we're not comfortable with abstractions. But if you show me what honor looks like, even a glimpse, I'll know. If you show me what valor looks like, then I'll know what it means.

"Audie Murphy fit the role of a hero. Being a hero is great for the society. But it's really hard on the person who, for a moment, becomes a hero."

The Roots of a Legend

Born in Hunt County, Texas, in 1925, the son of Irish sharecroppers, Audie Leon Murphy grew up in extreme poverty — the Great Depression began in 1929 — inside a family in turmoil. Murphy's father deserted the family when he was just a kid. When Murphy was 16, as World War II broke out in Europe, his mother died. Some of his younger siblings were placed in an orphanage.

"[T]o say that the family was poor would be an understatement. Poverty dogged our every step," Murphy wrote in "To Hell and Back," his 1949 memoir. "Year after year the babies had come until there were nine of us children living, and two dead. Getting food for our stomachs and clothes for our back was an ever-present problem. As soon as we were old enough to handle a plow, an ax, or a hoe, we were thrown into the struggle for existence," he wrote.

Just 5-foot-5 (1.6 meters) and barely 100 pounds (45 kilograms), Murphy dreamed of the service as a way out. After his mother died, he tried to join the Marines but was turned down for being too small and too young. He was finally accepted into the U.S. Army, with some tweaked documentation, in June 1942. He was just 17.

After his training in the States, Murphy was shipped to North Africa with the 3rd Infantry Division, the beginning of a short but unparalleled career in which he was awarded every medal for valor that the Army could confer. (Some of the original commendations are here.) One of his battlefield exploits, in particular, became legendary.

During a firefight in France on Jan. 26, 1945, an American tank destroyer was hit by German fire, setting it ablaze and forcing the crew to abandon. Murphy ordered artillery fire on the German positions and called for his men to retreat to nearby woods. But Murphy did not fall back. Instead, he mounted the burning tank, grabbed control of its .50-caliber machine gun, and faced with hostile fire from three sides for more than an hour, kept the Germans at bay, killing scores of them. Murphy was wounded in both legs in the fight.

He was awarded the Medal of Honor for his actions. From the his citation (via the Smithsonian Institution):

2d Lt. Murphy's indomitable courage and his refusal to give an inch of ground saved his company from possible encirclement and destruction, and enabled it to hold the woods which had been the enemy's objective.

Murphy returned home to parades — some 300,000 people in San Antonio — more awards (from France and Belgium, too), and rewards that enabled him to buy a house for his older sister, where his younger siblings came to live for some time. On July 16, 1945, a smiling Murphy was featured on the cover of Life Magazine with the words "Most Decorated Soldier."

He had just turned 20 years old.

Two of Audie Murphy's most famous Hollywood movies are "The Red Badge of Courage," and "To Hell and Back," which is a film of his autobiography of the same name.
Public Domain

In 1945, movie star James Cagney and his brother were looking for a new type of star for their fledgling film production company when they saw the Life article. Cagney called up Murphy, signed him, put him through acting lessons and helped him get his first roles in the industry, though Cagney's production company soon would falter.

Murphy, too, found the early going rough. "I had eight words to say," Murphy reportedly said of his first role, in 1948's "Beyond Glory." "Seven more than I could handle."

Murphy was far from a natural at his newfound career.

"It was a huge leap," Smith says. "And he didn't make it very well at all. Audie Murphy didn't know what he was going to do. You get the feeling he did it just because he needed a gig. And Cagney needed a break."

Still, Murphy kept at it. By the time Universal picked up the rights to his memoir, "To Hell and Back," he had a few moderately successful films to his credit, starring with such Hollywood luminaries as Tony Curtis, Jane Wyatt, Hugh O'Brian and Lee Marvin. Murphy found his first starring role as a troubled teenager in 1949's "Bad Boy".

When it came time for the film "To Hell and Back," Murphy suggested Curtis for the lead. But the producers had Murphy in mind to play himself, and he finally relented. It was a surreal kind of role for Murphy, but one that made the film enormously popular. "To Hell and Back," released in 1955, would be Universal's highest-grossing picture until "Jaws" unseated it 20 years later.

Audie Murphy is seen here in a studio publicity photo for the film "The Red Badge of Courage."
Wikimedia/Lightshow

"Gallantry has been glorified more dramatically on film previously," The New York Times said of the film in a 1955 writeup, "but Mr. Murphy, who still seems to be the shy, serious tenderfoot rather than a titan among G.I. heroes, lends stature, credibility, and dignity to an autobiography that would be routine and hackneyed without him."

Murphy addressed the nature of playing himself in the movie's more grueling scenes.

"This strange jerking back and forth between make-believe and reality," he said, according to an article published years later in The Times. "Between fighting for your life and the discovery that it's only a game and you have to do a retake because a tourist's dog ran across the field in the middle of battle."

Murphy would go on to make more than 40 films in his career — mostly war stories and Westerns, though he did dip into other genres — and starred in a short-lived TV Western in 1960, "Whispering Smith." (An early episode featured a young Robert Redford.) But it was "To Hell and Back" for which he reportedly earned more than $1 million that made his mark in Hollywood.

"Unless you could get a part that was tailored to him and his personality, he looked out of place," Smith says. "But if you could find a role that he could somehow naturally inhabit, the way that it doesn't feel phony to him, then he could do well in it.

"He had moments where he could sort of lose himself. But the whole acting business to him seemed kind of phony. And when you watch his movies, you get the sense that this is a guy that never did get past that."

The Other Audie Murphy

During his time in the Army, Murphy engaged in some of the fiercest battles of the war. He was wounded several times, battled cases of gangrene and malaria, was directly responsible for the deaths of many dozens of the enemy and saw many of his fellow soldiers die by his side.

In the '40s and '50s, experiences like that often led to psychological problems, then known as "shell shock" or "battle fatigue." Now it goes by a different name: post-traumatic stress disorder (PTSD). And it is something that Murphy clearly struggled with for years, throughout his life in Hollywood and beyond.

"The way that we understand PTSD today ... that's basically since the '60s and '70s. People who knew him thought he was just nuts," Smith says of Murphy. "He slept with a loaded gun under his pillow. He took these incredible risks with money, and he was a compulsive gambler. Nobody stitched this stuff together in a way that let him understand that what he's dealing with here is trauma from the war. And he never got help. And that's sort of the tragedy.

"He knew that he was carrying something with him. But it was the generation that suffered in silence."

Murphy moved from the surrealism of war to the unreal world of Hollywood, so it's probably not surprising that a kid from utter poverty who never got past the eighth grade struggled. "He had this very strong sense of reality and genuineness," Smith says, "and I think it sort of bothered him a lot that he was an actor."

During his postwar lifetime, Murphy made and lost fortunes. As his acting career slowed — his last film was 1969's "A Time for Dying" — he dabbled in raising racehorses and in other ventures. He declared bankruptcy in 1968, and was on his way to look into another investing venture in late May 1971 when the plane in which he was traveling crashed into a Virginia hillside. He and five others died. He was just 45.

On June 1, 1971, 25 years after returning home from the war, The New York Times carried his obituary on the front page. The headline read, "Audie Murphy, War Hero, Killed in Plane Crash."

According to the obit, someone once asked Murphy how soldiers get past the horrors of war.

Murphy is buried in Arlington National Cemetery, the U.S. military cemetery in Arlington County, Virginia.
U.S. Defense Department
NOW THAT'S INTERESTING
The Audie L. Murphy Memorial website features several poems that Murphy wrote, in addition to the lyrics of many songs he penned after his return from the war. The Audie Murphy/American Cotton Museum in Greenville, Texas, honors both the memory of Murphy and cotton's place in the history of Hunt County, Texas.

An Anteater's Tongue Can Be 2 Feet Long! Plus 7 Other Peculiar Anteater Facts 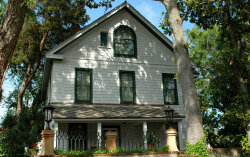 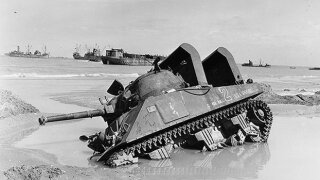 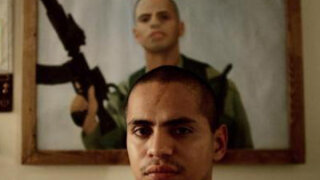 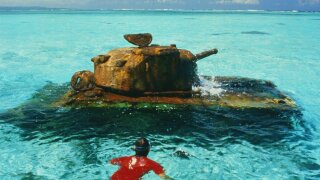