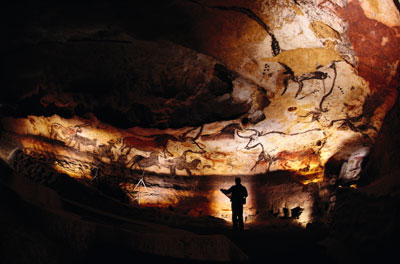 Many of the remnants of Paleolithic societies have been found in caves. That doesn't mean that people spent a lot of time living in caves -- the environment of a cave simply preserves these remnants from erosion, corrosion and decay, allowing them to last for tens of thousands of years. But not all caves are so helpful. Caves that have water sources inside them, known as active caves, make it difficult to determine what life was like in the past. Floods and changes in the water's course spread detritus like bones, stone fragments and tools throughout the cave, often hundreds of meters from where they were first dropped.

Even cave art isn't really restricted to caves. Again, caves preserve the art better, but Stone Age paintings of animals have been found on rocks and cliffs throughout Africa [source: Constable]. The most famous cave in the world is Lascaux, near Montignac, France. It was discovered in 1940, and the entrance was later modified to create an entryway and masonry floors for visitors. However, the cave was eventually sealed off and climate-controlled to prevent damage to the paintings, which are very sensitive to the flashes from cameras and the carbon dioxide given off by visitors.

We can only speculate about the purposes of the cave paintings found at Lascaux and other sites. They may have been part of religious rituals, simple representations of life as the cave dwellers experienced it, or superstitious homages created in hopes of a successful hunt. One thing is clear: The main subject on the minds of the cave dwellers was the animal life around them. The overwhelming majority of the images painted onto the cave walls depict animals, mainly herd animals such as bison, horses and boars [source: Aujoulat]. Some images seem abstract, depicting grid and dot patterns. These may have been a primitive form of calendar or sign, or they may have represented images seen while in a trance [source: Price]. It's just as interesting to consider what wasn't depicted by cave art: very few trees or other vegetation, and few images of humans. We have no idea why they neglected these subjects.

The cave paintings, particularly at Lascaux, are remarkably detailed. Some of them depict large animals at near life size. The primary pigments used were iron oxides for red and manganese for black. Ochre created a variety of yellow or orange shades. Cave dwellers applied the paint by blowing through a tube or directly from the mouth. They also used brushes made from animal hair or plant material, along with their fingers, rocks and other tools [source: Aujoulat]. Sometimes the images were engraved in addition to being painted. Many of the paintings were made deep within the cave with the aid of torches and lamps. The lamps were pieces of stone with a handle on one end and a hollow carved at the other. A piece of animal fat was placed in the hollow and lit with an ember [source: Aujoulat].

Along with paintings, we've found other things inside caves that give us hints about the lives of the cave dwellers. They made jewelry and engraved small items out of bone or ivory (and probably wood, though none of those survived). Some cave dweller cultures buried their dead with such items, suggesting some kind of religious belief or belief in an afterlife.

Some people still live in caves today. We'll find out why and where in the next section.­

Troglodyte is a word sometimes used in a general way as a synonym for "caveman." It's a Greek word that, literally translated, means "someone who lives in a hole." There are historical and Biblical references to a tribe of people on the western coast of Africa who lived in caves, called Troglodyti or Troglodytae.