The Rise of Joseph McCarthy 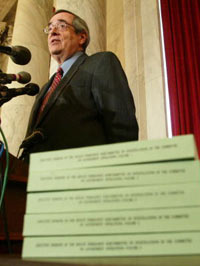 Born in Wisconsin in 1908, Joseph Raymond McCarthy attended Marquette University and became an attorney in 1935, smack in the middle of the Great Depression. He became the youngest circuit court judge in Wisconsin history when he defeated an incumbent in 1939. During World War II, he joined the Marines, where he was promoted to captain. After two years, though, he left because of a broken bone in his foot that was suffered during a hazing ritual. In 1944 he ran for U.S. Senate, parlaying his military service into the patriotic persona of "Tail Gunner Joe." He didn't win that time, but did take the ticket in 1946 when he became Wisconsin's junior senator.

McCarthy burst onto the national scene several years later. In 1950, during a highly controversial speech at a Lincoln's Birthday luncheon, he waved around a list of 205 names of supposed active communists holding jobs in the State Department.

McCarthy was a relative unknown, but once he lit the fire under America's fear of communism, there seemed to be no stopping it. There had already been some cases of communist spies selling and giving secrets to the Soviet Union about the American government and nuclear program. McCarthy claimed that liberal officials knew of other threats to national security but were taking a soft approach toward identifying them.

McCarthy then embarked on what is often described as a "witch hunt" to root out and prosecute communists and sympathizers — using controversial techniques and often making accusations with scant evidence.

Before McCarthy's crusade, numerous people were convicted for espionage and other activities related to communism. The most notorious were , the only U.S. citizens executed for espionage during the Cold War. In 1950, the Rosenbergs, known communists, were arrested on suspicion of espionage and providing nuclear secrets to the Soviets. They steadfastly maintained their innocence but invoked their Fifth Amendment right to avoid incriminating themselves. The couple was convicted in 1951 and executed on June 19, 1953. It is believed that the information they provided to the Soviet Union led directly to its successful development of the atomic bomb [source: Atomic Archive].