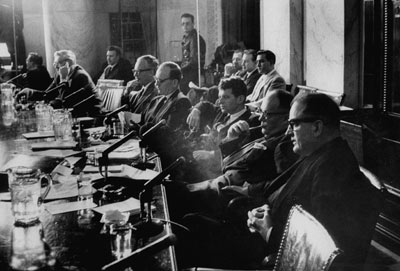 McCarthy identified suspected communists through a variety of channels. Some were members of organizations with reported communist sympathies. Some were associates of known communists, and homosexuality was also an apparent cause of suspicion. However they were identified, McCarthy took aim at his targets with great tenacity.

Once McCarthy's claims gained national attention, he became chairman of the Senate Committee on Government Operations. This increased level of power afforded him the opportunity to investigate the people he suspected of being communists or sympathizers. Hundreds of witnesses were brought before the Senate committee, in both public and private hearings. Transcripts of the Senate hearings, which became available in 2003, confirm what the American public eventually realized about McCarthy's interview tactics. He used severe intimidation, and often the threat of prison, when trying to get information — and he often had little or no solid evidence on which to base his claims. The names of many witnesses and suspects were released publicly, resulting in defamation of character and guilt by association. Careers and reputations were irreversibly damaged. And when all was said and done, there were no convictions for subversion.

L­iberals and conservatives alike agreed that McCarthy's actions were reckless and that his methods were out of line. In fact, his actions directly resulted in a 1957 Supreme Court ruling that secures the constitutional rights of witnesses during a congressional investigation. In other words, even though congressional investigations don't take place in an actual court, witnesses cannot be subjected to less-than-ethical interrogation methods.

One of the most enduring legacies of McCarthyism was its effect on Hollywood. Next, we'll learn about McCarthy's targeting of the film industry.­

The term was coined in a Washington Post cartoon by Herbert Block that ran on March 29, 1950. It showed Republicans forcing an elephant, their party symbol, to stand on a precarious pile of tar buckets. The highest bucket was tagged "McCarthyism," and the caption quoted the elephant saying, "You mean I'm supposed to stand on that?"