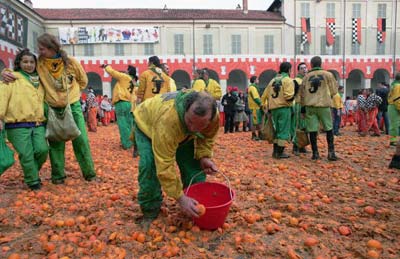 A team of orange throwers await the next team of carriages to arrive in Ivrea, Italy. The carnival's famous orange battles originate from the town's medieval heritage, when feudal lords would hand out food to the poor who reputedly threw it back as a gesture of disrespect.
Marco Di Lauro/Getty Images

The concept of royalty is centuries ­old. It originated with the feudal systems of medieval Europe. Under feudalism, there were a few very powerful landowners who acquired large amounts of territory through military force or purchase. These landowners became high-ranking lords, and one of them was crowned king. This probably happened through a show of military force or through political machinations, or some combination of the two. Powerful as they were, these lords controlled too much territory to manage on their own. They would name vassals, lower-ranking nobles who were granted some property and whatever income it generated (usually through rents paid by commoners or profits from farming). In return, the vassal would act as administrator of that territory. More importantly, the vassal was obligated to provide military aid to his lord. He would raise a private army, and if his territory was large enough, he might create several vassals of his own below him.

­Each vassal was given a title, but no direct political power was afforded to him at first. Rules of succession developed along the same lines as rules of inheritance, because a vassalage was essentially property loaned to someone by a higher-ranking lord. When the vassal died, his property, including his title and obligations to the king, was inherited by his heirs. Over time, a variety of elaborate traditions and rituals grew up around this system.

­Monarchies are found mainly in Europe because Europe was the only place to have a truly feudal system. The shogunates of Japan were very similar, however, which is why Japan has an imperial system that shares many features with European monarchies.

In the 17th, 18th and 19th centuries, republicanism began to chip away at traditional royal power throughout Europe. In some places, the change to a democratic form of government happened gradually and peacefully (as in Denmark); in others, it happened via sudden, violent revolution (as inFrance). Very often, deposed and exiled royalty would return years later when monarchists had gained political power over republicans. The English Civil War, which happened in the mid-1600s, resulted in the execution of the king, Charles I. His heir, Charles II, was exiled to France. He eventually returned, but the English monarchy's power was diminished and Parliament gained a great deal of political control.

Royalty developed in the Middle East in a slightly different way. While power was still accrued via military and political maneuvering, politics and religion are more intertwined in the Middle East. The head of state was known as the caliph, and his authority stemmed not just from political power or wealth but from Islamic law. Below the caliph were sultans. A sultan is like a lesser king, a military commander and a religious authority (although not a priest). In modern times, many Middle Eastern sultanates adopted the European model of constitutional monarchy, and some sultans renamed themselves kings to better reflect their more secular role.

On the next page, we'll discuss what royalty has to do with class -- and what happens when a king dies.

Popular myth suggests that there is a single Royal Crown per monarchy, and that the crown itself is an enduring symbol of the sovereign. This isn't true. Although kings and queens may wear or display crowns worn by their ancestors from time to time, each monarch creates (or is given as a gift) his or her own crown. Each crown commemorates a special occasion, such as a coronation or a wedding.