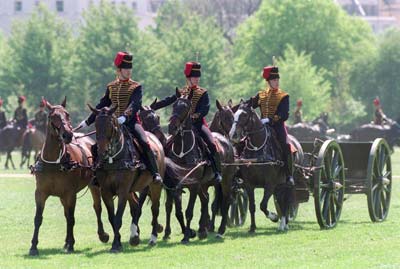 Royalty is the highest possible class, the uppermost of the upper class. In fact, royals transcend class, since their position is not dependent on economic status. Not only are they (usually) very wealthy, they are intrinsically bound to the government of the country they live in. They may rule the country outright, play a part in its legislative process, or simply perform ceremonial duties. They may even be considered a part of the country itself.

Different countries have their own systems for deciding who is royalty and who isn't, and these systems can change. One of the common myths about royalty is that they are stuffy, old-fashioned and resistant to change, but the fact that so many royal houses continue to exist into the 21st century is proof of their adaptability.

In some systems, royalty is simple: Members of the ruling family are royal, everyone else is a commoner. There may be other people with noble titles like duke or baroness, but they're not considered any more royal than the teenager working at the corner petrol station.

­In other countries, there may be several royal families, also known as houses. They might all be considered "royal," even though only one family is in line for the crown. However, if no one in the current line meets the requirements of succession (the passing of the crown when the current king or queen dies or abdicates the throne), one of the other royal families could lay claim to the crown. In fact, the rules of succession could lead the crown to pass to a different family, or a different branch of the same family. All of this is further complicated by the fact that virtually all the royal houses of Europe are extensively intermarried, going back generations. There have been countless succession conflicts over the centuries. Particularly troublesome are those times when no viable heir is around to inherit the crown when the king dies.­

What happens when the king dies?

Each country has a different method for deciding who is next in line to be king or queen. Often, the oldest male heir to the former king receives the crown. This is known as agnatic succession, and is the current practice in Japan. Other countries allow female heirs to take the crown, as Britain does. In some nations, the decision is not so arbitrary. Several potential heirs may be qualified (all male children and siblings, for example). A committee of nobles then elects the next king from among these candidates, hopefully choosing the wisest and most competent among them.

When a line dies out and no immediately suitable heir can be found, the rules can be thrown out completely. The person who ends up taking the crown may not be the one with the clearest bloodline to the former monarch, but rather the person who most successfully navigates the political minefield surrounding such events.­