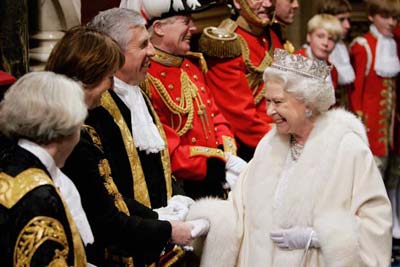 Queen Elizabeth II meets the Lord Chancellor Jack Straw and Tessa Jowell at the House of Lords for the State Opening of Parliament in London, England.
Tim Graham/Getty Images

In centuries past, royals had far greater political power than they do today (with a few exceptions). The king was the head of the country. He commanded the military, made laws, appointed officials and in general governed the nation. However, a monarch's power was usually not absolute. Other nobles, as well as church officials if there was a state church (and there usually was), met regularly with the king to advise him, air grievances and otherwise put their two cents in. Of course, the king could always do as he pleased, but it was a balancing act. The lesser nobles usually had their own private armies. They were also responsible for collecting taxes in their section of the kingdom. If the king truly alienated them and he lost their support, they could make life very difficult for him. In fact, this is exactly what lead to the English Civil War and the temporary collapse of the British monarchy.

­­The political functions of lesser nobles were eventually formalized. The regular meetings of dukes and bishops in England evolved into the House of Lords, the upper house of the British Parliament. Even today, the House of Lords is made up of several dozen hereditary nobles and a large number of life peers who are appointed by the queen. Practically speaking, these life peers are selected carefully to maintain a certain balance between political parties.

­Some modern monarchs maintain this level of power, but that is rare. Most sovereigns today are part of constitutional monarchies, a form of government in which they are officially recognized and given varying amounts of political power, though it's always limited. Japan's emperor, for example, has virtually no political power. He maintains a purely ceremonial function, and is at all times subject to approval by the Japanese executive branch. The Queen of England technically holds greater power, but in practical terms she is a figurehead. England's monarch consults with the Prime Minister and Parliament before making appointments or signing laws. She does serve as the head­ of state, representing the nation at special functions such as state dinners.

As an example of the dilution of the queen's power, we have Canada. Technically, Canada exists as a separate constitutional monarchy from Great Britain, but by agreement, their succession rules are the same, so they will always have the same queen. Australia is part of the same agreement. Thus, Queen Elizabeth II is not empress of a large empire -- rather, she is simultaneously Queen of England, Queen of Australia and Queen of Canada (in addition to a variety of smaller territories). This stems from the days when Canada was part of the British Empire, and the crown of England did rule over Canada. The Canadian constitution places the Queen as head of state, and all Canadian laws and treaties must be approved by her. In reality, an appointed governor acts as her representative, and for all intents and purposes, decisions made by the Canadian parliament are never opposed. Thus, the Queen exercises virtually no political power in Canada.

Jordan is another constitutional monarchy, but the King of Jordan has an amount of political power similar to that of the U.S. president. He appoints judges and signs laws, but he can be overruled by Jordan's legislative body, the National Assembly.­­

Pretenders to the Throne

Contrary to what it may sound like­, a pretender to the throne is not a fake or illegitimate king (although he could be). A pretender is someone who lays claim to a crown but doesn't hold it. This could be because someone else is currently holding it (illegitimately, in the pretender's eyes) or because the royal family has been deposed and that country doesn't currently support a monarchy at all. These claims may be completely true and legitimate, but for whatever reason the defunct king is unable to take hold of his crown -- thus, he is a pretender.