Browse the article How did 168 conquistadors take down the Incan empire? 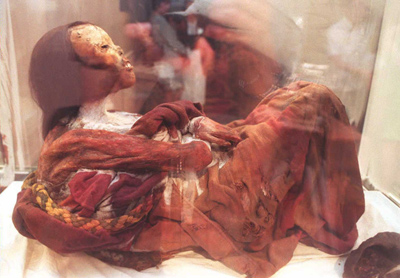 Image Gallery: The Inca Many sacrificed Inca children -- like "Princess of Ampato," shown in Washington D.C. in 1996 -- were preserved by the cold and high altitudes of the Andes. See more Inca pictures.
Joyce Naltchayan/AFP/Getty Images

The Inca believed they were on to something with child sacrifice. The ritual killing of perfectly beautiful children high in the Andes Mountains wasn't something they took lightly. When a child was offered by his or her parents as a sacrifice, the Inca held feasts in the child's honor. They wished the child well during the procession through villages to the mountain peaks where the ceremony would be held.

Workers built a ceremonial chamber, and the child received corn alcohol to stave off fear. Scientists debate how the children died, but explorer and anthropologist Johan Reinhard believes they died from exposure to the elements. Before that happened, though, a cushioned blow to the head knocked the child out, to help prevent suffering. The child's parents would often return to the site of the sacrifice to bring further offerings [source:Clark].

"This was the ultimate sacrifice the Inca could make to please the mountain gods: to offer up their own children in the highest places humans could possibly reach," writes NOVA producer Leisl Clark [source: Clark].

The concept of human sacrifice is a difficult one for many modern people to accept. A tenet of anthropology, however, is cultural relativism: To understand a culture, one can judge that culture only by its own standards, not by another culture's standards. This holds true for all cultures past and present, and through this lens, the motives of a people come into focus.

The Inca didn't sacrifice children for sport or because they didn't value their young. The ritual was a solemn, dignified process by which the Inca hoped to appease their gods. On the contrary, children were sacrificed because they were valued by the Inca: To sacrifice such a valuable part of their society was to show their devotion to their religion.

To them, it must have seemed as though their sacrifices pleased their gods. The very successful Incan empire stretched 2,500 miles from modern day Ecuador to Chile [source: University of Colorado]. It reached a population of more than 1 million people just a couple hundred years after its founding. Through technology, might and communal society, the Inca tamed the Andes. And yet, when the Spanish came, it took fewer than 200 men to bring down this civilization in the sky.

How did this happen? Find out on the next page. 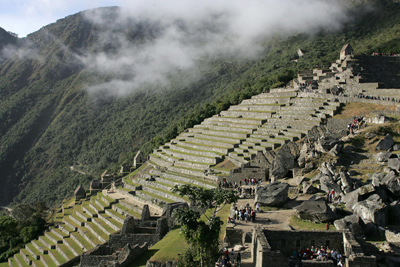 Machu Picchu, the Inca citadel, shortly after it was named one of the new Seven Wonders of the World in June 2007.
Eitan Abramovich/AFP/Getty Images

To understand how 168 men destr­oy­ed an empire of more than 1 million, we first have to understand what the Incan civilization was like.

The Incan society used an inflexible class system. At the pinnacle was the high ruler, the Inca. His people believed he was a descendent from the sun god, the most-worshipped of their deities. Below the Inca were his royal family and advisors, and so on, down to the commoners -- farmers, laborers and military.

The Inca came out of nowhere, founding their capital city Cuzco around A.D. 1100. They were expansionists, and they were good at it. In some areas, they used military might to crush resistance among tribes they sought to bring into their fold. In other cases, the Inca handsomely rewarded groups who agreed to join them. After a few centuries, the empire included hundreds of formerly separate tribes in the interior and west of South America. They were all joined under the common banner of the Incan ruler, and the common language, Quechua.

Since the Inca had no written language, it's difficult for anthropologists and historians to accurately discern what kind of economic model the Incan society used. Early in the 20th century it was viewed as a welfare state that made sure its citizens had what they needed or a despotic regime that harnassed the power of the people's labor for its own use [source: Beyers].

Whether the economy followed one of these models or an entirely different one, it's clear that the central government played a substantial role in the lives of its people. In return, these people benefited from Incan technology. They were protected by expertly crafted stone fortresses. They easily navigated the Andes using the Incan roads. Their crops grew because of the Incan irrigation systems; they were harvested on time because of the Incan calendar.

Amazingly, all of this progress and the expansion of an empire to an area 2,500 miles long was carried out without the benefit of the wheel. Considering what the Inca were able to do without the wheel, it's staggering to wonder what they may have accomplished with it. In lieu of the wheel, the Inca employed runners -- people trained to run long distances in short times -- to carry out the business of communication throughout the empire.Using a relay system, these runners could travel as far as 250 miles in a single day [source: Fowler].

A boom in expansion seen in the Incan empire during the 15th century made it too big for the central government to properly support. It had become unwieldy; the supply chain was suffering. Rebellions among scattered tribes were too far off to squelch. The reach of the Incan ruler wasn't long enough.

The stability of the empire only suffered further when Incan emperor Huayna Cupac and his chosen successor died within days of each other in 1525, creating a vacuum of power which two remaining sons fought to fill.

This was the state of the Incan civilization when the Spanish conqueror Francisco Pizarro arrived. He dealt the fatal blow to a society that may have soon died regardless. But the political and economic state alone doesn't explain Pizarro's success with so few men. Find out about the rest of the factors involved in the Incan downfall on the next page. 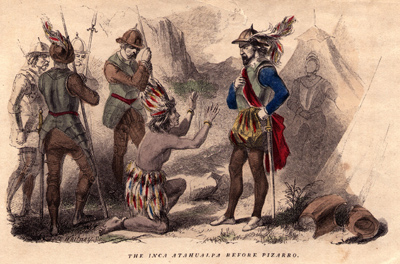 Francisco Pizarro wasn't the first Span­iard to overthrow a South American civilization. When Hernan Cortés came to Mesoamerica with his galleons and guns, he subdued the Aztec people with few men. In general, he denied offers of peace and coexistence in favor of plunder and enslavement.

Cortés sailed to South America from Cuba under the Spanish flag, but against the protests of the governor of Cuba, Diego Velázquez, who wanted to put someone else in charge of the expedition. Back home in Spain, Velázquez painted Cortés as power-hungry and reckless. But King Charles V forgave Cortés after he conquered the Aztecs in 1521 and returned home with their wealth.

Despite the murders and deaths of tens or even hundreds of thousands of Aztecs, the explorer inspired others to follow in his footsteps. Not the least of these was Francisco Pizarro. He, too, wished for riches, and he followed Cortés' example.

Pizarro and the Inca 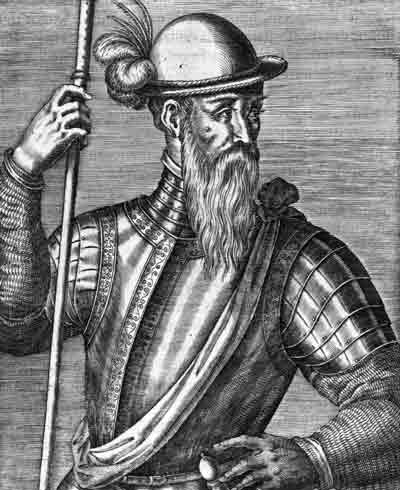 Spanish explorer Francisco Pizarro (c.1476-1541), who conquered the Inca Empire in Peru, established Lima as the country's capital, and melted down vast amounts of Inca gold and silver for his own gains.
Hulton Archive/Getty Images

Pizarro, like all other Europeans, had the distinct advantage of firearms over the indigenous population he sought to subjugate. The Inca hadn't been exposed to gunpowder until the rifles and cannons of the Spaniards were trained on them. And in addition to the actual advantages the gun offered over the spear or the arrow, it also gave the Spaniards a psychological advantage [source: Minnesota State University].

As in Mexico, psychology played a part in the Andes. Montezuma originally mistook Cortés as a returning god; Atahualpa, who had assumed power as the Inca emperor, believed Pizarro and his men were demigods. It was through this initial trust that Pizarro was able to gain Atahualpa's confidence. He soon captured the ruler and held him for ransom.

After he was paid, Pizarro retained the ruler rather than release him. He attempted to use him as a puppet dictator, carrying out the Spaniard's will through the Incan emperor's decrees. But Pizarro found this tactic useless; Atahualpa was executed at the hands of his captor. The blood of thousands more loyal to the Incan ruler was shed soon after.

The brutality of the Spaniards had become apparent to the Inca. Revolts and battles became normal, and to quash these skirmishes, Pizarro used another Cortés tactic: collusion. The conquistador identified tribes who were enemies of the Inca or unhappy with Inca rule, and established alliances with them.

Superior weaponry, psychological warfare, a perfectly timed arrival and native allies certainly helped Pizarro. But remember the Spaniard arrived in the Andes with fewer than 200 men. Even with these advantages, he wouldn't have been successful had it not been for another weapon, unexpected by both sides.

Biological warfare in the form of smallpox allowed Pizarro to conquer the Inca. Smallpox spread quickly through the Americas prior to Pizarro's arrival. Having lived alongside livestock for millennia gave much of Europe immunity to the worst ravages of smallpox. But the indigenous tribes of the Americas had no such advantage.

Smallpox unexpectedly killed Incan emperor Huayna Cupac, leaving the empire in civil unrest and war. The disease decimated the Incan population, paving the way for Pizarro's paltry troops to conquer a once-vast nation. "So complete was the chaos that Francisco Pizarro was able to seize an empire the size of Spain and Italy combined with a force of 168 men," writes Charles Mann in "1491" [source: Mann].

Ultimately, the diseases the Europeans brought with them did more damage than guns or greed. Within the 130 years following Columbus an estimated 95 percent of the Americas' inhabitants died [source: Mann].

For more information on conquest and other related topics, visit the next page.