Did Paul Revere really yell 'The British Are Coming'? 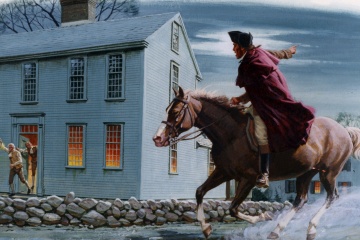 Paul Revere has long been lauded for his role in the American Revolution, but is he worthy?
Ed Vebell/Getty Images

If not for the shouts of Paul Revere coming from atop galloping horse tearing through the streets of Concord, Massachusetts, unsuspecting colonists may never have been warned of the British army's impending attack. Thanks to Revere's courageous midnight ride from Lexington to Concord in April 1775, he thwarted a certain thrashing of Colonial forces and became a pivotal figure in the American Revolution. A retelling of his hair-raising journey in Henry Wadsworth Longfellow's poem, "The Midnight Ride of Paul Revere," cemented his place in history. It's a tale most Americans know.

Except we don't, because Paul Revere's ride never actually happened -- at least not the way we think it did. Paul Revere didn't ride through the streets of Concord hollering a warning. He didn't even make it to Concord at all.

Paul Revere, an activist in the Patriot movement, rode that night with two other men, Samuel Prescott and William Dawes. Only one of them succeeded in reaching Concord to warn of the British invasion. After they left Lexington, Revere, Prescott and Dawes were arrested and detained by a British patrol. Prescott was the first to escape and set off for Concord, where he warned its residents to protect the ammunition and weapons stored in a hidden depot near the town. Dawes later escaped as well, although by some accounts he became lost in the dark and never made it to Concord.

Revere was eventually set free, but without the horse he'd borrowed for the journey. Rather than setting out for Concord, he walked back to Lexington, only to discover the city ensconced in the battle on Lexington Green. He'd still been in captivity when the first shots were fired [sources: Wolverton, The Paul Revere House].

Although he didn't yell, "The British are coming!" Revere did manage to warn all of Lexington about the British invasion in the hours before he spurred a horse toward Concord.

After the American Revolution, Revere -- an accomplished goldsmith and silversmith -- expanded his business to include a foundry from which he produced cannons and cast bells. He later opened the first copper rolling mill in North America, which at one time produced "Revereware" cookware with copper bottoms. Revere died in 1811 at age 76, and become posthumously famous for his supposed role in the Revolutionary War when Wadsworth penned the popular "Midnight Ride" poem in 1860 [source: The Paul Revere House].