Did you know that two other men accompanied Paul Revere on his famous midnight ride? If you didn't, then you're not alone. The story of the midnight ride was stamped on the American psyche by Henry Wadsworth Longfellow's popular 1861 poem "The Midnight Ride of Paul Revere." And anyone who's read the poem envisions a lone hero dashing through the night, single-handedly warning his countrymen of a British attack.

But that's not the whole story. Two other men rode with Revere that night: William Dawes and Samuel Prescott. They were left out of the poem and subsequently most history books.

Some joke that Longfellow used Revere's name in his poem -- instead of Revere's comrades' names -- simply because it was easier to rhyme with other key words. In fact, a woman named Helen F. Moore wrote a parody poem in 1896 titled "The Midnight Ride of William Dawes." The poem compares Dawes' and Revere's accomplishments, but complains, "What was the use, when my name was Dawes!"

More likely it was Paul Revere's established political fame in the Massachusetts Bay Colony that landed him his starring role in the Longfellow poem. A silversmith by trade, he spent most of his free time supporting the patriots' cause. He had participated in the Boston Tea Party to protest taxation without representation -- one of the main events leading up to the Revolutionary War. And he was known as a reliable courier for news and messages that needed to be distributed to patriot leadership, so much so that the British even had someone tracking his movements.

But truth be told, it was really Samuel Prescott who completed the midnight ride. Read on to find out how the three riders carried out their mission on the night of April 18, 1775 to start the American Revolution.

Paul Revere would be surprised that he receives sole credit for the midnight ride. In addition to Dawes and Prescott, dozens of other men helped spread the word that night. Still, some historians think Revere deserves the credit. Through his networking and leadership skills, he basically built the massive communications machine that made the night of April 18 a success. Revere started other express riders on their way before leaving Boston, and he also alerted others along his journey. They too began riding, or shot guns and rang church bells to alert the community. Revere covered 13 miles in less than two hours, but he was not working alone. 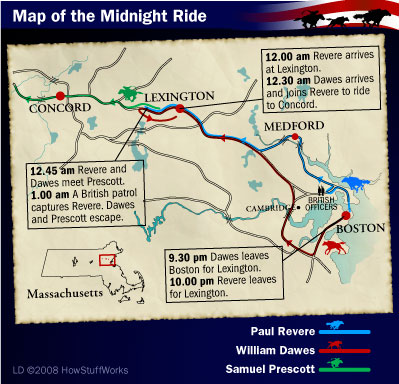 The Ride to Concord

A young doctor named Samuel Prescott became a midnight rider by chance when he met Revere and Dawes on their way to Concord. Prescott was on his way home from visiting his fiancée, and he offered to help spread the word because he was a local.

Paul Revere rode ahead of the other two men to check for British patrols. Halfway between Lexington and Concord, the patrols found them. Revere shouted back that there were only a few and that they could fight them off. But when Prescott rode up to help, more troops appeared. Prescott and Revere made a break for it. Prescott veered to the left and jumped a wall to escape. Revere broke right and was cornered by troops. Dawes escaped in the confusion, yelling out in various accents that he had captured some Regulars. As he was riding off, his horse stopped short and threw him off. Dawes lost his watch and his horse. Tired and frustrated, he ended his ride and began walking back to Lexington.

Prescott, who was the most familiar with the area, made his way back to the main road and continued to notify people. He found other riders to join the cause, and he made it to Concord -- the only one of the original midnight riders to do so. Despite carrying out the mission, historians know very little about Prescott. The most detailed account of the night comes from Revere himself. So we'll turn back to his side of the story.

The British patrols were quite pleased they'd captured the famed Paul Revere, and they questioned him at gunpoint. Revere remained calm and told the troops their plans would be foiled, that the whole countryside was marching at that very moment, ready to fight. The troops escorted Revere back to Lexington, where they heard gunfire. It was just militiamen testing their rifles but it unnerved the British. Realizing they could move faster without prisoners, they released Revere but kept his horse.

Revere continued on foot and met up with Samuel Adams and John Hancock, who were debating whether to fight with the patriots or head for safety. They decided to retreat to Philadelphia, and Revere was sent to a tavern to retrieve Hancock's trunk. On his errand, he heard the first shots fired on Lexington Green. The Revolutionary War had begun, thanks to Revere and the other midnight riders' success in mobilizing the troops. William Dawes went back to the Concord road and found his watch. He fought at the Battle of Bunker Hill, and after the war, set up a store. He died in 1799. Samuel Prescott served as a surgeon in the Continental Army and joined the crew of a privateer. He was captured by the Royal Navy and was held prisoner in Halifax. He died there around 1777, and he never got to marry the young woman he had been visiting the night of the midnight ride. Paul Revere had a disastrous military career. But he did find success as an industrialist during the war, constructing the first powder mill and later a copper mill. He remained a prominent citizen of Boston until his death in 1818.

The midnight ride triggered war and a new independent nation. To learn more about the ride, see the links on the next page.­

Henry Wadsworth Longfellow's poem "Paul Revere's Ride" omits the efforts of Dawes, Prescott and dozens of nameless midnight riders. It contains other errors as well; most notably, the signal of two lanterns hanging in the Old North Church was a signal from Revere, not a signal to Revere.

Longfellow didn't intend for the work an historical account. Rather, the 1860 poem was meant to inspire his fellow countrymen on the eve of the Civil War. You can read "The Midnight Ride of Paul Revere" at the Atlantic Monthly web site.