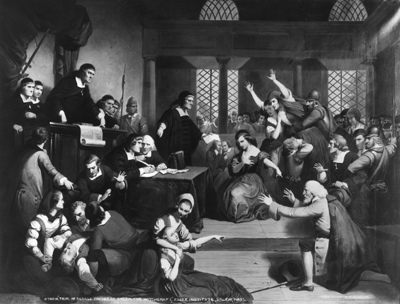 The trial of George Jacobs, one of 19 villagers who would meet their death at the gallows in 1692.
MPI/Getty Images

Salem Village in late winter of 1692 was a grey, bleak place. Between the immense forests inland and the vast, featureless sea, it felt like the world was closing in on the Puritan colonists who inhabited the area. Two tribes of Native Americans warred nearby. Smallpox had recently made its way through the population of about 500 people. "It was easy to believe in 1692 in Salem … that the devil was close at hand," writes historian Douglas Linder. "Sudden and violent death occupied minds."

The social structure, too, was under strain. Three new generations had been born into the village since the original colonists had arrived, each seemingly further from the staid, pious adherence to Biblical code that had driven the Puritans from Europe and into the American wilderness. Their original plans for a new Eden appeared to be going astray.

In February 1692 the devil, who lurked within every shadow of Salem in the Puritans' imaginations, showed himself. The villagers lashed out violently and wildly against him.

Nine months later, 37 people would be dead as a result of the witchcraft trials. They were killed at the hands of their fellow villagers -- people they had grown up with, worked with and known intimately. People who had turned on them.

­Colonists in the New World had been tried elsewhere for witchcraft, it wasn't necessarily rare. But never had any group so fully committed itself to what seemed like madness.

This is not to say that the Salem villagers were clinically insane in the winter of 1692. It's impossible to make such a judgment, but historians have searched for answers to this event since it happened. In 1976, one historian suggested that perhaps a naturally occurring hallucinogen lay at the heart of one of the darkest moments in America's history.

On the next page, we'll learn about Linda Caporael's theory about the influence of drugs on the Salem witch trials. 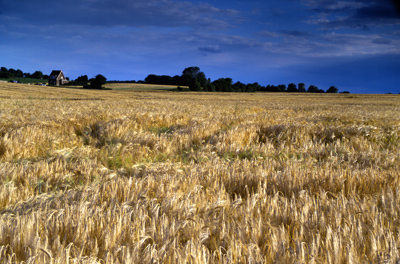 Rye grain is the most occurring source for the toxic ergot fungus. Could it be ergot poisoning that started the hysteria?
Miklav/Dreamstime

In February 1692, Elizabeth Parris, the daughter of the village's new minister, fell mysteriously ill. The 10-year-old girl began to exhibit strange behavior -- barking at her father, throwing herself about her room, and screaming of her skin being pinched and stung. After local physician William Griggs was confounded by the girl's symptoms and the failure of the treatments he tried on her, he pronounced that evil was at work on the girl. She was "possessed," and soon other girls in the village followed her into her illness.

Since Puritans believed the devil worked in league with witches, the already suspicious Salem residents began to look at one another. At the center was Tituba, a Barbadian slave who worked for the Reverend Samuel Parris, Elizabeth's father. Tituba and other residents found themselves accused by the girls who were suffering fits and convulsions.

No historian has concluded that it was indeed witchcraft that caused the girls' illness, and there are varying explanations for the supposed possessions. Perhaps most interesting is historian Linda Caporael's claim that it was ergot poisoning that originally created the hysteria.

Ergot is the result of a mold -- toxic and often fatal to humans -- which grows on grain. For centuries, farmers knew of the mold -- which they called cockspur -- but assumed it was harmless [source: Shelton]. Some people believed that the cockspur, which looks like black whole grains, was simply grain cooked by the sun [source: Caporael]. This was not the case, however. 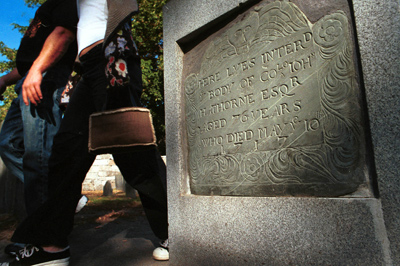 This engraving marks the grave of Judge John Hathorne, who presided over the 1692 witch trials. Is it possible that it was ergot poisoning that started the hysteria?
Darren McCollester/Newsmakers

Outbreaks of ergot poisoning have occurred elsewhere in history, the earliest on record being in Germany in A.D. 857. The idea that ergot was causing the ghastly illness called St. Anthony's Fire was suspected as early as 1670 after an investigation by a French physician named Thuillier [source: University of Georgia]. But it wasn't until 1853 that Louis Rene Tulanse proved indubitably that these cockspurs were causing the agonizing death of so many people and animals.

Simply eating bread containing flour made from grain containing ergot can kill a person. Ergot poisoning can manifest in two ways: Gangrenous ergotism involves a burning of the skin, blisters and dry rot of the extremities -- which eventually fall off. The condition usually results in the death of the sufferer.

Convulsive ergotism attacks the central nervous system, causing mania, psychosis, hallucinations, paralysis and prickling sensations. It was these symptoms that reminded Caporael of those exhibited by Elizabeth Parris -- especially the mania.

Accounts written during 1692 describe behavior of the afflicted girls that bears an uncanny resemblance to a hallucinogenic state, and the fungus contains isoergine -- the main ingredient in the drug LSD. Is it possible that Elizabeth Parris and her fellow afflicted had eaten rye and fallen ill with convulsive ergotism?

Read about the arguments for and against the theory of ergot poisoning as an explanation for the Salem witch trials on the next page.

Caporael isn't pulling her theory out of thin air. The historian researched the growing season of rye -- the grain on which ergot seems to grow most easily. She found that there had been a wet summer in Salem, Massachusetts prior to the winter of 1692, and ergot spreads most easily in damp weather.

The historian also researched where the households of the girls who suffered the fits the villagers concluded was bewitchment got their grain. The first two afflicted, Elizabeth Parris and Abigail Williams, were cousins and lived beneath the same roof, so they both would have eaten the same grain. Moreover, two-thirds of the salary of their provider, the Reverend Parris, was paid in goods -- like grain -- rather than currency [source: Caporael]. The Parris household could have gotten the grain they ate from any number of sources.

The ergot-poisoning theory certainly seems to explain the afflictions the girls underwent, but the idea has come under attack since it was first introduced in 1976. Some historians feel that it's entirely possible that Elizabeth Parris, the first girl to fall ill, did suffer from some form of ergot poisoning. The rest of the girls, however, are believed to have taken an opportunity to stave off the boredom of colonial life with a ruse. If this is true, it's hard to imagine their reactions when the adults took the reins and began to hang their neighbors.

Other historians don't believe that ergot had anything to do with the Salem witch trials. University of Georgia history professor Dr. Peter Hoffer raises some questions: "Why only the girls, why not others?" he asks. "Why only [1692], why not previous years and later years?"

Hoffer, who has written extensively on the Salem witch trials, is one of those who believes the girls who accused their neighbors of witchcraft were carrying out a prank.

Regardless of the cause -- whether it was ergot poisoning, a teen prank, a vendetta against past wrongs, a grab for land or mass hysteria -- the Salem witch trials stand as a dark period in American history.

Had it not been for the slave Tituba's baffling confession upon questioning, the physicians' diagnosis of bewitchment, the powder keg that was Salem at the time, had any of these elements been missing, perhaps the trials would have never taken place. But these elements converged and created an environment of suspicion and reckless abandon. Then again, history is a convergence of events and conditions that seem separate until they come together to form a whole.

For more information on witchcraft and other related topics, visit the next page.

The Dare Stones: Forgery or Key to Lost Colony of Roanoke Mystery?
From Slave to Millionaire Philanthropist: The Biddy Mason Story
When Government Conspiracies Come True