The Legacy of the Jefferson Bible 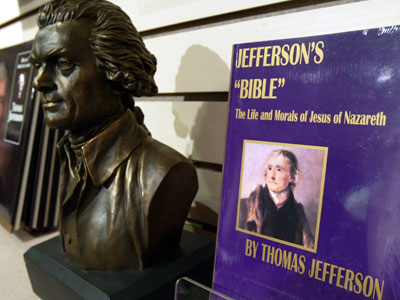 Today, you can find the Jefferson Bible in bookstores, libraries and museum gift-shops as well as the Thomas Jefferson Memorial, where it's displayed in this image.
Alex Wong/Getty Images

It's worth noting that the original name Jefferson lent his book was "The Philosophy of Jesus of Nazareth." This fit well into his idea that Jesus should be regarded much like other ancient philosophers. After he revisited the work in retirement (when he added the translations in other languages), he tweaked the title to "The Life and Morals of Jesus of Nazareth."

When Jefferson pasted his bible together, he wasn't expecting to revolutionize Christianity and organized religion or even gain a following. Quite the contrary, the bible was a private project of his that -- aside from mentioning it in a few letters to friends -- he didn't publicize [source: Reece]. Although one theory states that he intended to write it for the education of Native Americans, he indicated in his letters that he wrote it for himself [source: Church].

Regardless of the intended audience, Jefferson's work wasn't published for many decades after his death. Finally, in 1895, a Smithsonian librarian named Cyrus Adler stumbled upon the cut-up Bibles and Jefferson's work in an obscure private collection [source: Jefferson]. Adler's discovery was purchased by Congress and put in the United States National Museum in Washington, D.C. Congress published copies of Jefferson's bible for the first time in 1904. Since then, the book has been used customarily as a gift for recently sworn-in members of Congress. The original work is public domain and thus is not copyrighted, so today you can find it in many bookstores and libraries as well as online. It's sometimes classified under history and alternately under religion. However, Jefferson himself would probably be disappointed that the work isn't often found under philosophy.

Aside from its intended nature as a philosophical text, the bible has provided some useful insight into the mind of Thomas Jefferson. His personal life and beliefs have always fascinated historians. Some scholars even propose that he may have not publicized his bible because he was worried about public reaction to his unorthodox religious views.