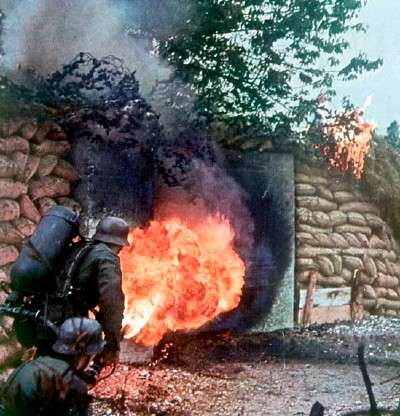 Nazi Germany invaded the Soviet Union in July 1941. Learn about what went on during those first several days in the timeline below.

July 1: Riga, the capital of Latvia, is overwhelmed by a Nazi German occupation force.

July 2: The first member of the British Royal Air Force's (RAF) American Eagle Squadron to be killed in action dies in a midair collision over France.

The Japanese military bolsters its strength with a million-man draft.

July 3: Joseph Stalin calls for a "scorched earth" defense, in which both the Red Army and ordinary Russian citizens would lay waste to the land as they retreat from the advancing Germans, leaving nothing to support the enemy troops.

July 6: Winston Churchill sends a message to Joseph Stalin expressing the hope that the great powers can join forces to fight the German menace.

The occupying Nazis order the murder of 2,500 Jews in Kovno, Lithuania.

July 8: The RAF raids the Nazi German naval base of Wilhelmshaven.

The occupying Nazis decree that all Baltic Jews must wear identifying yellow Stars of David.

July 9: George Johnson Armstrong, a British naval engineer who offered his services as a spy to the Nazis while stationed in the United States, is executed for treason.

Read on for more information about the early days of the Nazi German invasion of the Soviet Union.

Massacres in Lvov, Poland: Before the Nazi Germans reached Lvov, Poland, on June 30, 1941, the NKVD (Narodnyi Komissariat Vnutrennikh Del; Soviet Secret Police) murdered 5,000 Ukrainian and Polish nationalists, Jews, and political prisoners in the city's jails. Subsequently, the Germans capitalized on the atrocity by blaming it on Lvov's Jews.

A three-day killing spree resulted that was conducted by Nazi German troops and an SS Einsatzgruppe, together with local Ukrainians and Poles. Some 4,000 Jews were killed, and an additional 7,000 Jews and captured NKVD men were executed by the SS before the end of the year. By November 1943, virtually all 150,000 of Lvov's Jews would be dead.

Operation Barbarossa: At dawn on June 22, 1941, more than four million Axis soldiers (of whom at least three million were German), 3,360 tanks, and 7,000 artillery pieces -- supported by 2,000 aircraft -- stormed across the German-Soviet border. What Russia called the Great Patriotic War had begun.

Initially, three Nazi German army groups -- comprised of some 120 divisions -- swiftly overwhelmed the Red Army's front-line defenses and struck deep into Soviet territory. However, despite the Wehrmacht's early successes, Operation Barbarossa eventually proved to be Adolf Hitler's greatest strategic mistake, for he had badly underestimated the Soviet Union's military-industrial capability, its geography, and its environment.

Slavery, starvation, and death for Soviet POWs: The Belorussian city of Minsk fell to the encircling advances of the Second and Third Panzer Groups on June 28, 1941, just six days after the start of Operation Barbarossa. During that week, panzer units captured more than 200,000 Soviets.

Large numbers of those prisoners were transported in railway coal trucks from Minsk to Poland, where they would be interned or possibly moved on to camps further west. Thereafter, they probably would be used as slave labor while routinely experiencing deliberate maltreatment and appalling living conditions. Two-thirds of all Soviet POWs would be worked, starved, or shot to death.

Nazi Germans fight in the Ukraine: In the Ukraine during the summer of 1941, Field Marshal Rundstedt's Army Group South had more difficulties than in the middle and north. The panzer groups fought their way across the sun-baked and seemingly endless Russian steppe. Soviet resistance held up the Nazi German advance. The Nazis then struck behind the Red Army defending Kiev and surrounded them, capturing huge numbers of prisoners and equipment.

Close-quarter fighting was typically carried out by the Nazi German infantry divisions. Assault engineer units that followed some days behind dealt with the many pockets of resistance that had been bypassed by the armored forces. Nazi German soldiers used flamethrowers (including this Flammenwerfer 35) extensively, particularly on bunkers and trench systems.

The Soviet T-34 is the war's top tank: Arguably, the Soviet T-34 was the best tank produced by any side during the war. T-34s first appeared on the battlefield in early July 1941, when their excellent cross-country performance, 33-mph top speed, and powerful 76.2mm guns completely outclassed the Nazi German panzers. Their well-sloped armor also proved impervious to anti-tank fire.

T-34s were simple to operate and easily mass-produced (1,000 by 1941, with about 40,000 made during the war). Usually working closely with the infantry, who often rode into battle on the rear decks of the tanks, the T-34s were a highly important contributor to the eventual Soviet victory.

The timeline of the Nazi German invasion of the Soviet Union in the summer of 1941 continues on the next page.