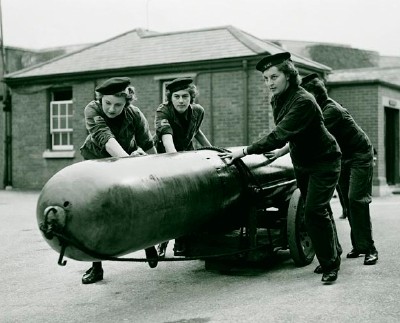 In July 1941, Hermann Göring called for the complete annihilation for Europe's Jewish population. Read about this and the other major events during this period in the World War II timeline below.

­­The Nazi government sent millions of 'undesirables' to thousands of slave-labor camps by convincing people they would be resettled, rather than murdered. Learn more about the Nazi party, concentration camps, and World War II in this video from United Streaming.

July 10: In a shadowy case of "ethnic self-cleansing," some 1,600 Jewish villagers are tortured and murdered in Jedwabne, Poland. (The atrocity was blamed on the Nazis, but recent research indicates that Polish gentiles are to blame.)

July 12: Representatives from Britain and the Soviet Union meet in Moscow to sign a mutual aid treaty.

July 16: About 600,000 Russians are trapped when the Nazi German army encircles the Soviet city of Smolensk.

July 21: The Luftwaffe suffers heavy losses in a bombing raid on Moscow.

July 22: With their supply lines stretched to the breaking point, Nazi German troops are forced to stop their progress through Russia for the first time in the campaign.

July 24: Nearly 4,500 Jews are murdered by Nazi Einsatzgruppen in the town of Lachowicze, Poland.

The Vichy French government hands southern Indochina over to the Japanese.

July 26: The British and American governments freeze hundreds of millions of dollars in Japanese assets in their respective nations. The Japanese will employ the same tactic in two days.

General Douglas MacArthur is called out of retirement by President Franklin Roosevelt to assume command of United States forces in the Far East.

August 2: President Franklin Roosevelt extends the Lend-Lease Act to allow for aid to the Soviet Union.

The following headlines detail some of the other major events of World War II during 1941.

U.S. deprives Japan of oil: Oil barrels remain piled on the dock after President Franklin Roosevelt's declaration of an oil embargo on Japan in July 1941. The embargo, which followed similar restrictions on sales of iron and steel, was intended to persuade the Japanese to withdraw from Indochina, disavow the Tripartite Pact, and abandon the war in China. Instead, it only pushed energy-poor Japan, which depended on the United States for at least 65 percent of its petroleum products, closer to war with the West.

Unwilling to abandon its ambitions in China and the Pacific, and with only 18 months of reserve stocks for the military, the Japanese armed services worked on their plans to seize the oil fields in the Dutch East Indies, even though that action risked war with the United States.

Philip Joubert takes charge of Coastal Command: British air marshal Sir Philip Joubert de la Ferté was one of the war's most influential airmen. As assistant chief of air staff in September 1939, he contributed significantly to the application of radar in the British Royal Air Force (RAF).

In June 1941, he became commander-in-chief of Coastal Command, which had lacked resources and had destroyed just two U-boats. It sank a further 27 during the following 20 months. Joubert centralized Coastal Command and narrowed the dangerous Atlantic Gap. He was appointed inspector-general of the RAF in 1943, and later that year joined Lord Mountbatten's South East Asia Command.

Long-distance relationships between British parents and children: "And here in Ottawa we have little Polly and Geoffrey Carton, aged 8 and 5. Now. . . come in Mrs. Carton and say hello. . . ." "Hello, Polly." "Hello, Mummy." "This is the nicest thing that's happened to me since you went away." This exchange took place on July 27, 1941, between the Cartons in Britain and their two children in Canada using a radio link-up similar to this.

In summer 1940, it was expected that the Germans would soon invade England, so many parents sent their children oversees to family and friends in Canada, the United States, or any other safe haven. About 13,000 children were shipped to safety.

Working at most naval shore establishments in Britain, the Wrens grew to number 74,620 in 1944. Many served on overseas bases in the Middle East and Far East. The Wrens did not serve on ships, but they crewed harbor launches and worked on tasks as diverse as signaling, driving, and welding.

British put POWs to work for England: Many Axis prisoners of war at this time are almost certainly Italians, as very few Germans had been captured in 1940-1941. It was not until July 1941 that POWs were used to support the Ministry of Agriculture's food-growing programs, when about 2,000 Italian POWs were transferred from North Africa specifically for that purpose. Despite some early hostility, the Italians often enjoyed remarkably amicable relations with the local British communities.

Learn about the major World War II events that occurred during August 1941 on the next page.

Japan's desire for economic independence and the establishment of a commanding presence in East Asia required access to resources, particularly oil for the military machine. On July 24, 1941, the quest to conquer these resources prompted Japanese forces to enter southern Indochina.

With this incursion, Japanese military leaders knew they were courting war with the United States. Indeed, President Franklin Roosevelt reacted harshly, freezing Japanese assets and placing oil exports to Japan under restrictive licensing. This virtual embargo would be lifted only if the Japanese withdrew from China and Indochina and ended their pact with the Axis powers.

From the Japanese perspective, the situation was untenable. At least 65 percent of Japan's petroleum products came from American firms. The embargo would paralyze the country economically and leave the military with only 18 months of oil from reserve oil stocks. Without oil, the navy could not operate and Japan would become militarily impotent. Acquiescence to Roosevelt's conditions would not only entail an unacceptable loss of face, it would force an end to Japan's quest for regional dominance.

Japan's military demanded that the government either obtain a diplomatic settlement that would preserve Japanese interests or step down so a new government could prepare for war. Time was critical. Under the American restrictions, Japan would grow weaker as the Allies grew stronger. If diplomacy failed, Japan must fight.

Of course in the end, diplomacy did fail. Japan attacked Pearl Harbor on December 7, 1941, and the U.S. declared war on Japan the next day.