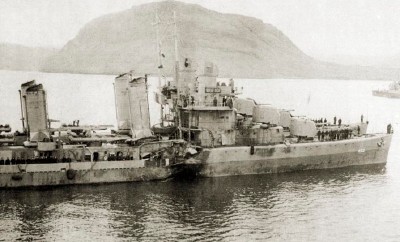 Kiev finally succumbed to Nazi German pressure on September 16, 1941. See the timeline below for details on this and the other major events during mid-September 1941.

September 11: A shoot-on-sight order is handed down to U.S. Navy ships running convoy protection operations on the seas.

Aviator and isolationist Charles Lindbergh delivers a speech in Des Moines, Iowa, in which he blames the deepening U.S. involvement in the European war on Britain, Franklin Roosevelt, and Jews.

September 16: The Soviet Union front at Kiev collapses in the face of intense Nazi German pressure, and some 500,000 Soviets surrender. Kiev will officially fall to the Nazi Germans in two days.

September 17: At least one day too late, the Red Army high command orders its men to retreat from the city of Kiev.

September 18: Already suffering high casualties, the captured Soviet troops in the surrounded region of Kiev begin to be summarily executed by the Germans. The Soviet death toll in defense of Kiev will top 350,000.

Japanese military leaders are instructed to prepare their troops for operations in the Pacific.

September 20: The Soviet Union receives advance notice of a Nazi German attack on Moscow, thanks to Britain's success in capturing and decoding Enigma encryptions.

September 22: A Ukrainian militia squad does the Nazis' dirty work, murdering 28,000 Soviet Jews near the town of Vinnitsa.

Learn about some of the other major World War II events that took place during 1941 in the headlines below.

U-boat torpedoes the USS Kearny in the North Atlantic: On October 17, 1941, a U-boat torpedoed this destroyer, the USS Kearny, in the North Atlantic. The Kearny had gone to aid a slow convoy under wolf pack attack, but it became a target itself when it was silhouetted at night by the light of a torpedoed merchant ship and halted by passing traffic. The torpedo that hit its starboard side caused many casualties, including 11 deaths.

A Navy Catalina (flying boat) dropped plasma to the ship by parachute. The Kearny returned to Iceland under its own steam, escorted by the USS Greer. The latter's inconclusive battle with U-652 on September 4, 1941, had led to President Franklin Roosevelt's "shoot on sight" policy against vessels interfering with American shipping.

British aircrafts and warships dominate in Mediterranean: Upon becoming Britain's prime minister in 1940, Winston Churchill defied his admirals and wielded his considerable naval expertise against the Axis powers in the eastern Mediterranean. Under his leadership, British aircraft destroyed Axis U-boats as they surfaced to recharge their batteries. British warships, such as the tiny corvette HMS Daisy, were also remarkably successful at destroying submarines. Commissioned in October 1941, the Daisy's service was distinguished but short. The ship foundered on January 2, 1942, while en route from Alexandra to Tobruk.

U.S. loses its first naval vessel, the USS Reuben James: The USS Reuben James, a Clemson Class destroyer, was the first American naval vessel lost in World War II. It was one of five destroyers escorting a fast convoy when, about 600 miles west of Ireland on October 31, 1941, a torpedo from U-552 struck it. The forepart of the ship was blown off as far back as the fourth of its characteristic four stacks. Only 45 of its crew of about 160 survived. Among the dead were all of the ship's officers, including the commanding officer, LCDR H. L. Edwards. This disaster prompted further amendments to the Neutrality Act.

The many uses of the American M3 tank: The M3 was the most important American light tank of the war, with more than 13,000 produced. First built in March 1941, it underwent numerous improvements. For example, the first model was riveted and the final was entirely welded. A gyrostabilizer was incorporated in 1941 to enable it to fire accurately while moving.

The M3 was fast and mechanically reliable but lightly armored and armed. Allied armies employed it -- thanks to Lend-Lease -- in conditions ranging from the North African desert to Soviet snow and Pacific jungles. The tank was called the M3 or, unofficially, the Honey. Mine-exploder and flame-thrower versions were also made.

Allied troops are the "Rats of Tobruk": In 1941, during the longest siege in British history, predominantly Australian troops defended the strategic Libyan seaport of Tobruk from forces led by German commander Erwin Rommel. William ("Lord Haw-Haw") Joyce, the British radio announcer who broadcast Nazi propaganda from Berlin, derisively described Tobruk's defenders as rats. Desperate but valiant Allied troops embraced the name, calling themselves the "Rats of Tobruk" as they tunneled to escape Axis bombing, launched daring and ruthless raids, and commandeered enemy weaponry.

The major World War II events of late September and early October are detailed on the next page.