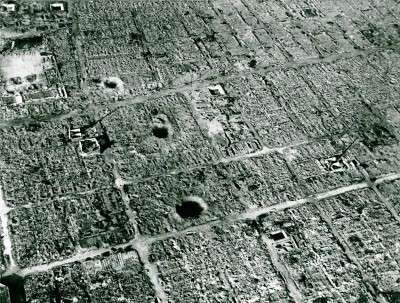 June 18: The USAAF launches a devastating series of air raids that target the civilian populations of major Japanese cities.

June 19: Manhattan honors General Eisenhower with a ticker tape parade upon his return to the United States following victory in Europe.

June 21: U.S. troops capture Aparri, the last Japanese port on the Philippine island of Luzon. However, substantial Japanese forces will continue the fight on Luzon until the August surrender.

June 22: The bloodiest battle of the Pacific war ends as American troops secure Okinawa following their hard-won victory over the Japanese.

June 27: Czechoslovakian Nazi puppet Emil Hacha, former president of the Bohemia-Moravia Protectorate, dies in a prison hospital before he can be tried for treason.

June 27: A kamikaze strike on the USS Bunker Hill claims the lives of 373 American sailors.

July 3: The Western Allies occupy the sectors of Berlin allocated to the Americans, British, and French by prior agreement with the Soviet Union.

Below are more highlights of the events of World War II in 1945, as Japanese forces struggled and failed to regain ground.

B-29 raids devastate Osaka, Japan: Desolation stretches as far as the eye can see after repeated B-29 incendiary raids on Osaka, which was Japan's second largest industrial city and the site of a military arsenal. The first incendiary raid on Osaka was conducted by 300 B-29s on the night of March 13, 1945. Within three hours, more than eight square miles of the city was in flames. The heat turbulence was so great that one B-29, Thunderin' Loretta, was flipped over on its back. On June 7, Osaka was hit by 400 B-29s. This was followed by another attack a week later. By then, there was little left to destroy.

Japanese children forced to work as a result of manpower shortage: Former schoolgirls learned to use factory lathes as Japan tries to cope with manpower shortages late in the war. Women, prisoners of war, and forced laborers were all moved into the workforce in an effort to maintain production. As many as 3.4 million children exchanged their studies for hard manual labor in the factories. Work was proclaimed to be "equal education." Underfed and unskilled, the children were subjected to long hours under harsh conditions. "We worked twelve hours straight -- no breaks except to go to the toilet which was outside the factory building," recalled one child laborer.

Heavy casualties on Okinawa, Japan: U.S. Marines were assaulted near Wana Ridge on Okinawa. Despite heavy casualties, the American divisions continued to batter the enemy defenses, transforming the terrain into a moonscape. Japanese resistance continued as General Ushijima Mitsuru's best units were gradually annihilated. Shuri fell in late May, and by mid-June the Japanese 32nd Army began to collapse. Ushijima committed suicide on June 22, and Japan lost 110,000 men in the battle. American dead totaled 12,281, making Okinawa the most costly Allied operation of the Pacific war -- which did not bode well for the upcoming invasion of Japan.

Japan's rocket-powered weapon, the Ohka (Cherry Blossom): U.S. Marines faced Japanese Ohka (Cherry Blossom) flying bomb at Okinawa's Yontan Airfield. Nicknamed "Baka" ("Fool") by the Allies, the rocket-propelled missile included a one-ton warhead. The weapon was designed to be launched from an aircraft and guided to its target -- usually a ship -- by a suicide pilot. The Ohka reached speeds of 650 mph in its rocket-assisted dive, making it virtually unstoppable on its final approach. Appearing late in the war, Ohkas are credited with sinking or damaging three ships beyond repair and significantly damaging three additional vessels.

Australians overtake Balikpapan, Borneo: Australian troops went ashore at Balikpapan on the southeast coast of Borneo in the last major amphibious assault of the Pacific war. The Seventh Australian Division landed in July 1945 to seize Balikpapan's port and oil fields. Outnumbered and outgunned, the Japanese offered stubborn resistance, but were eventually forced to retreat into the hills. Balikpapan cost the Australians 229 killed and 634 wounded. Japanese casualties totaled about 2,000. Conducted six weeks before Japan's surrender, the operation was later criticized as a waste of lives, although no one at the time could have realized that the war would end so abruptly.

See the next page for a detailed timeline of World War II events in July 1945, as World War II called for Japan's surrender.