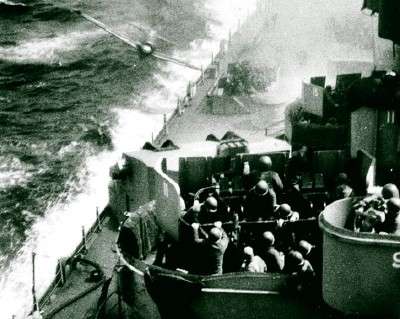 A Japanese kamikaze pilot aims his aircraft at the USS Missouri in the waters off Okinawa on April 11, 1945. See more pictures of World War II.

On the afternoon of April 12, 1945, nearing the end of World War II, U.S. President Franklin Delano Roosevelt collapsed and died from a cerebral hemorrhage. Vice President Harry Truman was catapulted from relative obscurity to a world stage in which the United States had to oversee the final defeat of Nazi Germany and Japan and play a key part in the reconstruction of the postwar order.

Adolf Hitler interpreted Franklin Delano Roosevelt's death as a miracle of deliverance. Locked away in his bunker in Berlin, the German leader played out grotesque fantasies of a final victory in which his enemies became divided and hostile -- or tired of the terrible cost of subduing the German people. Adolf Hitler no longer saw the reality of his battered country. The heaviest bombing of the war reduced German cities to ruins one after the other -- most notoriously the city of Dresden. From February 13 to February 15, 30,000 people were killed there in Allied bombing. Nazi Germany could not sustain war production. In both west and east, German forces fought on fatalistically against hopeless odds.

By February 9, American troops had breached the Siegfried Line in western Germany, and by March 5 they had reached the Rhine River at Cologne. The Germans mounted little resistance, with only 26 poorly armed divisions. Meanwhile, 214 divisions tried to hold back the Red Army in eastern Germany. By May 4, the German forces in northern Germany, the Netherlands, and Denmark surrendered to Montgomery's British Commonwealth armies. Farther south, General Eisenhower swung the American advance away from the Rhine-Berlin axis toward southern Germany, where he feared the German army might make a final stand in a mountainous redoubt. Americans entered Austria in early May, by which time Axis forces in Italy had also surrendered. On April 28, Benito Mussolini was captured by Italian partisans and killed.

Adolf Hitler survived him by just two days. Since January 1945, the Soviets had pushed relentlessly toward Berlin and Vienna. By February, a succession of rolling offensives brought the Red Army within striking distance of both capitals. In the south, Budapest was occupied by February 11 and the last Germans were driven out of Hungary by early April. Farther north, Zhukov's armies reached the Oder River by February 2, but for the next month fierce pockets of German resistance held up progress toward Berlin.

The plan for the final assault was approved by Joseph Stalin in early April, and a huge semicircle of Soviet Union forces was launched at Adolf Hitler's capital on April 16. The final battle cost both sides exceptional casualties, but Soviet Union progress was remorseless. Ten days after the start of the battle, the forces of General Chuikov -- defender of Stalingrad two years prior -- reached the center of Berlin. When on April 30 Adolf Hitler was told that there was no prospect of further defense, he said goodbye to his staff and commanders, retired to his bunker living room with Eva Braun -- the mistress he had finally consented to marry the day before -- and there poisoned and shot himself while she took poison. The bodies were incinerated in the garden of the Reich chancellery, where Soviet Union soldiers found charred remains a few days later.

Adolf Hitler's suicide heralded the end. On­ May 2, the battered remnants of the Berlin garrison surrendered. On May 7, Adolf Hitler's chief of operations, Alfred Jodl, signed the act of unconditional surrender in the early hours of the morning in Reims, France. The Soviet Union side wanted a more elaborate and symbolic ceremony, and a second surrender was staged in Berlin the following day. Though Victory in Europe (V-E) Day was celebrated on both sides of the Atlantic on May 8, German forces fighting a desperate last stand around Prague refused to give up until May 12.

In the Pacific, the U.S. planned its assault on Iwo Jima the previous October, when it became clear that the islands close to the Japanese homeland would make important staging posts for the eventual invasion. Both Iwo Jima and Okinawa were to be attacked and cleared as a preliminary step. On both islands, large Japanese garrisons -- positioned in caves and foxholes -- were ordered to resist to the last man. After a heavy bombardment, four U.S. divisions landed on Iwo Jima on February 19. Four weeks of savage fighting brought exceptionally high American losses, but almost the entire Japanese garrison, more than 20,000 men, was wiped out.

On April 1, 1945, a similar landing was undertaken on Okinawa. After the U.S. established secure lodgements ashore, another bitter struggle followed to clear the island. The U.S. naval task force was attacked for weeks by kamikaze suicide planes, which sank more than 30 ships. Some 12,500 U.S. servicemen were killed, but so were 110,000 Japanese. Resistance on Okinawa did not end until June 21. The intense combat indicated just how difficult a final battle for the home islands of Japan might prove to be.

Before the capture of Iwo Jima, Joseph Stalin, Winston Churchill, and Franklin Delano Roosevelt met in conference together for the last time. In the Crimean city of Yalta, from February 4 to February 11, Joseph Stalin repeated his earlier agreement that the Soviet Union would enter the war against Japan once Nazi Germany was defeated. In exchange, he was promised the Kurile Islands and the return of the Japanese half of Sakhalin Island. Agreement was also reached on creating a new Polish state.

Franklin Delano Roosevelt, in poor health, was also determined to lay the foundation for a postwar world order in which the Soviet Union could participate. The result was a conference in San Francisco, California, that began on April 25, 1945. Participants laid the foundations for the United Nations organization, whose founding charter was signed on June 26. By that time, Franklin Delano Roosevelt -- whose vision the organization largely reflected -- was dead.

Among the Western Allies, well more than a million people died during the war. The Soviet Union lost an estimated 27 million, Poland six million, and Nazi Germany more than five million. "What a terrible war," Joseph Stalin told Zhukov. "How many lives of our people it has carried away. There are probably very few families left who have not lost someone near to them...."

Continue to the next page for a detailed timeline on the important World War II events that occurred during the first two weeks of February 1945.

The End of World War II

Some of the dramatic changes brought by World War II only became clear in hindsight. These articles explore the aftermath of the 20th century's most violent decade: