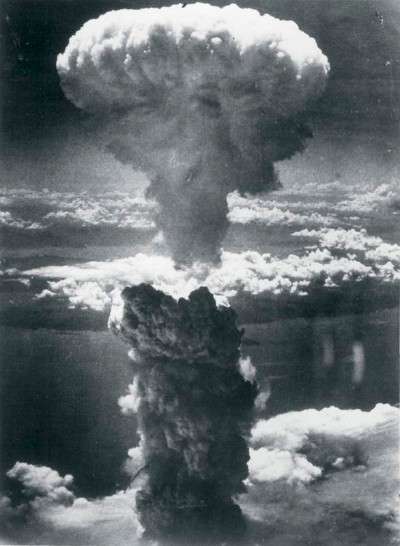 Atomic bomb attacks forced Japan to surrender at last in August 1945. The World War II timeline below summarizes this and other important events in July and August of 1945.

August 2: Some 6,600 tons of bombs, a wartime high, are dropped overnight on several Japanese cities. The city of Toyama is almost totally destroyed.

August 3: The Allies emerge victorious from the Battle of the Breakthrough, bringing an end to all Japanese resistance in Burma.

The Allies tighten the noose around Japan as U.S. bombers complete their mining of Japan's major ports.

A crash during an experimental jet test-flight claims the life of Major Richard Bong, the most successful American WWII flying ace (40 kills).

August 8: President Truman delivers a radio address in which he threatens to unleash more nuclear devastation on Japan.

Approximately 25,000 die as the U.S. drops a second atomic bomb, this one on Nagasaki, Japan.

August 11: The Japanese offer of surrender, delivered on August 10 and conditional on the continued sovereignty of Emperor Hirohito, is rejected by U.S. secretary of state James Byrnes.

August 14: Washington orders the suspension of hostilities in Asia and the resumption of automobile production on the home front.

A coup attempt, in which a group of Japanese army officers tries to take the Imperial Palace and prevent surrender, fails.

Below are more highlights and images that outline the events surrounding the end of World War II, including the atomic bomb attack on Nagasaki and the surrender of Japan.

Americans killed by Hiroshima bomb: Sergeant Hugh Atkinson of Seattle was among an estimated 20 U.S. POWs killed in the atomic bomb blast at Hiroshima. Atkinson's B-24, Lonesome Lady, had been shot down on July 28, and he was imprisoned at Chugoko Military Police Headquarters near the epicenter of the blast. One account indicates that Atkinson survived the bombing and was later beaten to death. The possibility exists that some of the POWs were murdered before or after the atomic bomb attack. Two naval aviators who survived the initial explosion are known to have died of radiation sickness and beatings several days later.

Nagasaki atomic bomb is called "Fat Man": "Fat Man" was the atomic bomb dropped on Nagasaki on August 9, 1945. Unlike "Little Boy," the uranium bomb used against Hiroshima, Fat Man was an implosion-type weapon that employed plutonium. About 11 feet long and five feet in diameter, it was twice as wide as Little Boy. The new design resulted from the greater availability of plutonium and the fact that the implosion method was less susceptible to accidental detonation than the simple "gun type" ignition used with Little Boy. The new design also yielded a greater blast.

The second atomic bomb is dropped on Nagasaki: A mushroom cloud boils skyward over the industrial city of Nagasaki following the detonation of a plutonium bomb on August 9. The B-29 Bock's Car, piloted by Major Charles Sweeney, aborted an attack on Kokura due to heavy cloud cover and proceeded to Nagasaki, the secondary target. Finding a break in the clouds, he carried out the bombing shortly after 11 a.m. Heated controversy arose later over the necessity for the second bomb attack, but the mission was carried out because of the lack of reaction from the Japanese government following the Hiroshima bombing.

Japan surrenders to the Allies: On August 14, 1945, the Japa­nese news agency Domei announced that the war was over. A crowd gathered before Emperor Hirohito's palace. People wept and bowed to the ground in disgrace, repeating "Forgive us, O Emperor, our efforts were not enough." Hirohito's subjects heard his voice for the first time ever the next day at noon, Tokyo time, when he formally announced the end of the war and directed the Japanese people to cooperate with the Allied occupation. American newspapers splashed the news in very large type on their front pages on the 14th and 15th of August.

Results of the Nagasaki atomic bomb attack: Pictured is ground zero in Nagasaki before and after the bombing. Though the city had good bomb shelters, many Japanese had become blasé about air raids and ignored the warning sirens on August 9. Due in part to the hilly topography, damage was confined to an area about 2.3 miles by 1.9 miles. Fire was limited by waterways. Some medical services survived, and even train service continued. The number of deaths was lower than at Hiroshima, with the Japanese government assessing the figure at 25,000. Ironically, Emperor Hirohito was at that very moment trying to decide how to end the war.

Japanese "bear the unbearable" following Japan's surrender: Japa­nese around the world cried as they listened to Emperor Hirohito's radio broadcast announcing Japan's surrender. Hearing the voice of their "living god" for the first time, the populace strained to make out his message through the formal language and poor reception. "The war situation has developed not necessarily to Japan's advantage," observed the Emperor. The Japanese people "must now bear the unbearable and endure the unendurable." Millions wept. Some military officers committed suicide, while others talked of continued resistance. But for many Japanese, beneath the grief and shock was also a sense of relief. The war was over.

V-J Day celebration: On August 15, more than two million people crowded into New York's Times Square anxiously awaiting word that the war with Japan was over. The New York Times agreed to keep its revolving news sign active until an announcement was made. Finally, at 7:03 p.m. Eastern Time, a message flashed across the Times sign stating, "Official -- Truman Announces Japanese Surrender." The pent-up energy of the revelers exploded in a whirl of hysteria. Strangers hugged and kissed each other. This picture of a sailor kissing a nurse in Times Square is not the famous photograph taken by Alfred Eisenstaedt but one taken simultaneously by Navy photographer Victor Jorgensen.

See the next page for a detailed timeline of World War II events in August of 1945, as the tail-end of Japanese resistance was squashed.