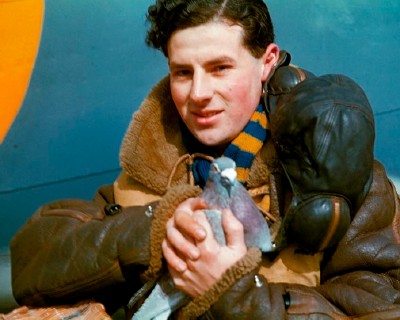 In late September 1940 Adolf Hitler and Nazi Germany signed the Tripartite Pact with Italy and Japan. This and other major events of World War II are summarized in the World War II timeline below.

September 27: France's Vichy government orders all Jews to carry cards identifying them as such.

The Axis is sealed with the signing of the Tripartite Pact, an economic and military alliance among Nazi Germany, Italy, and Japan.

September 29: Luxembourg is formally incorporated into the Reich.

October 3: Warsaw's Jews are herded into the city's Jewish ghetto.

October 4: With Operation Sealion temporarily delayed, Adolf Hitler meets with Benito Mussolini in an effort to enlist Italy to take on Britain on alternate fronts.

October 7: With Ion Antonescu's assent in Romania, Nazi Germany occupies that country on the pretext of protecting its oil fields from British saboteurs.

Japan formally voices its objection to the American ban on sales of fuel, scrap metal, and machine tools to Asia.

October 9: London's Cathedral of St. Paul sustains serious damage to the roof and altar when it is struck by a German bomb.

October 12: Adolf Hitler reschedules his invasion of Britain for April 4, 1941, leading Winston Churchill to joke that Britain is "waiting for the long-promised invasion. So are the fishes."

In a speech that implies that the U.S. may be ready for a greater role in the war, President Franklin Roosevelt claims that Americans "reject the doctrine of appeasement," calling it "a major weapon of the aggressor nations."

Below are more images and headlines detailing World War II events from October 1940.

Homing pigeons crucial to military communications: British, American, Canadian, and German forces all used homing pigeons, such as this one, to carry essential war-front messages. Dropped by parachute, pigeons also enabled communications from resistance fighters in France, Belgium, and Holland. One of the most famous birds was "GI Joe," a pigeon that raced to the U.S. Air Support Command with word that the Italian village of Colvi Vecchia had been taken by the British. The message arrived just in time to cancel a scheduled bombing, saving the lives of the villagers and 1,000 British troops.

Britain's Royal Air Force (RAF) begins targeted bombing of Berlin: In 1940 RAF bombers began trying to hit German oil refineries, factories, communications sites, and transportation lines, then increased attacks in 1941. In August 1940, the RAF made its first bombing raid on Berlin. Soviet Premier Vyacheslav Molotov, in the German capital in November 1940, was told that Britain had lost the war. If so, Molotov reportedly asked, "why are we in this shelter, and whose are the bombs which fall?" This photo of an RAF night raid on Berlin on October 7-8, 1940, shows German searchlights (broad, wavy lines) and tracks of antiaircraft fire. Exploding bombs show up as bright circles on the ground. According to later British assessments, few bombs hit their intended targets, and the bombing did little to diminish German morale.

In October 1940 Benito Mussolini disastrously decided to invade Greece. Learn about this and other World War II events from October 1940 on the next page.