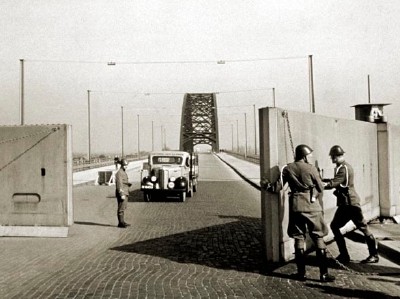 May and June of 1940 found the French defense crumbling under the powerful Nazi war machine. This and other events from late May to early June 1940 are detailed in World War II timeline below.

May 17: A Nazi occupying force marches into Brussels, Belgium. Antwerp, Belgium, will capitulate the next day.

May 21: According to reports out of Berlin, the French Ninth Army has been completely destroyed.

May 22: The Emergency Powers Act passes in Britain. It grants Winston Churchill total control of the resources needed to run the nation's war machine.

May 24: London decides to pull its troops out of a defeated Norway.

May 26: The Allies launch Operation Dynamo, a massive rescue operation to save troops surrounded by the Axis in Dunkirk, France. In just one week, nearly 350,000 British, French, and Belgian soldiers will be evacuated while Luftwaffe planes try to hinder the operation.

May 27: Nazi Germany takes the port city of Calais, France -- a mere 26 miles across the Channel from Dover, England.

May 28: King Leopold III orders the surrender of the 500,000-man Belgian Army, an order that will lead to his deposition at the hands of the Belgian government, which is in exile in France.

June 3: More than 250 Parisians lose their lives when the city endures an air assault by some 200 Luftwaffe planes.

June 4: Winston Churchill delivers the memorable "fight on the beaches" speech before the House of Commons, claiming, "We shall never surrender."

June 5: The French capture Luftwaffe pilot Werner Mölders. He will be liberated at the armistice near the end of the month, resume flying, and ultimately be credited with more than 100 victories before being killed in an accident.

Below are more World War II headlines and images from the Nazi invasion in May and June of 1940.

Bad strategy dooms Netherlands in fight against Nazis: The Netherlands was woefully unprepared for Germany's ground and air Blitzkrieg in May 1940. Dutch strategic planning had been shaped by an underestimation of Germany, strong pacifist influences, appeasement policies, refusal to coordinate with Britain and France, and a dependence upon defensive strong-points (such as this steel-gated bridge over the Maas River) and obstacles -- including flooding large areas of Holland. Consequently, the Germans quickly overwhelmed the sizable but outdated, ill-equipped, and largely immobile Dutch army. While some Dutch citizens formed an effective resistance movement beginning in 1942, anti-Semitism and pro-German collaboration were also in evidence.

The "Schmeisser" principal weapon of Wehrmacht: The MP40 Maschinenpistole was known universally but inaccurately as the "Schmeisser" after weapons designer Hugo Schmeisser, who did not design this submachine gun. However, this was one of the iconic weapons of the war, with both Allied and German troops recognizing it as the best weapon of its class. Conceived originally as a weapon for paratroops, it quickly became the Wehrmacht's principal submachine gun. It had a caliber of 9mm, a magazine that held 32 rounds, and a rate of fire of 500 rounds per minute. It was accurate up to 200 meters. Moreover, its all-metal stamped construction made it both cheap and easy to mass-produce.

The MG 34, a highly effective German machine gun: A German infantryman takes aim at the enemy with an MG 34 7.92mm light machine gun. While this version utilized a 50-round metal-link belt, the MG 34 could also be equipped with 50- and 75-round drum ammunition feeds. Although the MG 34 was expensive to produce, it was a highly effective weapon. It delivered a maximum rate of fire of 900 rpm to 600-800 yards (light role), and 300 rpm to 2,000-2,500 yards when mounted on a tripod in the heavy role. MG 34s also were fitted extensively to armored vehicles and trucks, and for anti-aircraft defense.

The following page contains a detailed timeline of World War II events from June of 1940.