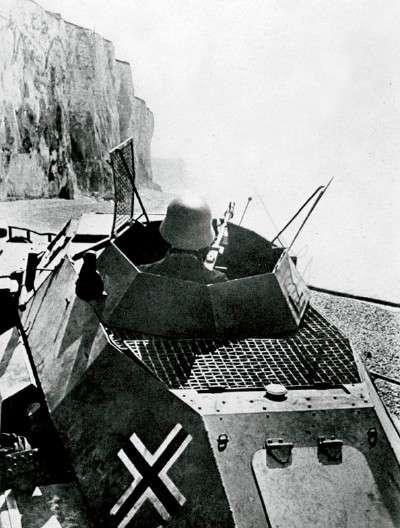 Late July and early August of 1940 found Adolf Hitler preparing to invade Britain and Benito Mussolini sending Italian forces into north Africa. These and other World War II events are detailed in the World War II timeline below.

The Special Operations Executive is created by Britain's War Cabinet to carry out acts of sabotage against Nazi Germany in occupied countries.

July 24: Nearly 50 civilians are killed in an Italian air raid of Jerusalem.

August 1: Adolf Hitler orders increased bombing of strategic British targets in preparation for Operation Sealion, which he intends to launch on September 15, 1940

August 5: Adolf Hitler and Benito Mussolini confer in Rome, with Mussolini assuring Hitler he will soon open the North African front with an assault into Egypt toward the Suez Canal.

August 8: In an effort to persuade India to take a more active role in promoting British interests in Southeast Asia, Britain promises its colony a new postwar constitution.

August 9: Due to greater needs on other fronts, British troops abandon Shanghai.

August 15: Germany is dealt a major blow during the Battle of Britain. Intending to knock out Britain's Royal Air Force, the Luftwaffe actually loses more than twice as many aircraft -- 75 compared to Britain's 32.

August 17: Germany blockades Britain, heavily mining its waters and vowing to attack all approaching ships, whether belligerent or neutral.

Below are more images and headlines detailing important events of World War II and the German and Italian invasions of 1940.

Germans train for Operation Sealion: In this faked photo, a German armored vehicle is supposedly on the beach of Dover, England. In 1940 Operation Sealion was a high-risk undertaking; no invasion of Britain had succeeded since 1066. Nevertheless, German plans advanced throughout that summer. Thousands of troops of the Ninth and 16th Armies assembled and trained in the coastal region, horses were conditioned to travel on barges, and hundreds of troop-carrying vessels were collected in French and Belgian ports. However, all ultimately depended upon the Luftwaffe achieving overall air supremacy beforehand, and so the victory won by the RAF during September's Battle of Britain effectively made Sealion no longer viable.

British submarines successful in Mediterranean: The HMS Taku was one of the oceangoing T-class boats that formed the mainstay of the British submarine fleet. Royal Navy submarines operated in shallow waters that were heavily mined and well defended by antisubmarine forces. Of more than 50 deployed, nearly one out of three was destroyed, usually going down with all hands. Nevertheless, Royal Navy subs took a heavy toll on German ships in Norwegian waters. In the dangerously shallow and clear Mediterranean, British subs successfully interrupted German and Italian supply routes to Africa. British submarines also landed and picked up clandestine agents in various areas, and supported Allied efforts in the Malacca Straits and seas near Indonesia.

The Blitz continued throughout September 1940. On the following page is a World War II timeline detailing this and other events.

"The bomber," British Prime Minister Stanley Baldwin had told a somber Parliament in 1932, "will always get through." The examples of Guernica in Spain, as well as Japanese attacks in China, suggested that Baldwin had been correct. After Britain's declaration of war in September 1939, its citizens prepared for the anticipated German bombing Blitz (a contraction of Blitzkrieg). The British launched barrage balloons to force bombers to high altitudes, while antiaircraft batteries ringed industrial targets.

Since only a few bombs fell until mid-1940, Britain did have ample time to prepare. The government raised a dramatically resourceful civilian Auxiliary Fire Service. Moreover, it organized medical services and evacuated some three million women and children to the country. (Middle-class families hosting them learned appalling truths about the lives of the urban working class.) An efficient and dedicated Air Raid Precautions organization enforced civil defense measures, including a strict blackout, while many families built air raid shelters. In London especially, thousands sought protection in public shelters and famously in Underground stations, a sign of official unpreparedness as much as popular stoicism.

When the air strikes came in August 1940, German bombers attacked London by day and night. What happened in London was the defining experience of the Blitz, but most large English cities were attacked as well. The notorious raid on Coventry, for instance, destroyed the city's center and killed more than 500 people.

The psychological basis of the attacks, that bombing would destroy a population's resolve, proved spectacularly wrong. "Britain Can Take It" became a popular motto, and though some cities approached panic at times, most people grew defiant rather than demoralized.

By mid-1941, when Nazi Germany's Luftwaffe joined the war against Russia, the sustained attacks against Britain largely ended. However, just days after the D-Day landing in June 1944, the first V-1 pilotless planes fell on London. In the fall of that year, V-2 ballistic missiles followed. Civilians wearied by five years of war were forced to endure a particularly terrifying weapon.

Some 70,000 British civilians died during the attacks of 1940-41 and 1944. But to this day, citizens still celebrate and romanticize the "spirit of the Blitz."