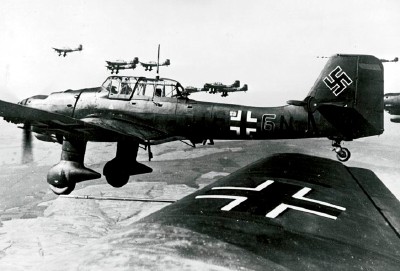 World War II officially began on September 1, 1939, when Nazi Germany invaded Poland. Below is a timeline tracing some of the important events of the first week of September, 1939.

September 1: World War II begins as the Germans invade Poland with a three-front Blitzkrieg. They attack the Polish army with an overwhelming force of 1.5 million troops backed by tactical aircraft in the sky and mobile armor on the ground.

September 2: Poland pleads for assistance from sworn allies Britain and France. They respond the following day by demanding Nazi Germany's withdrawal and declaring war against the Nazi regime. India, Canada, Australia, and New Zealand (and soon South Africa) issue their own declarations of war.

Without warning, a German U-boat torpedoes the Athenia, a British passenger ship carrying 1,400 civilians from England to Canada, killing 118.

September 4: The first RAF air assault is a disaster, with only eight of 29 bombers striking German naval bases. Ten of the RAF bombers get lost, seven are shot down, three attack one of Britain's own ships, and one attacks neutral Denmark.

September 5: The Nazis occupy the medieval Polish city of Kraków.

September 6: RAF Hurricanes and Spitfires that scramble during a false air raid alert end up shooting at each other, with the Spitfires downing the Hurricanes.

Below are more images and headlines from World War II that examine the details of Nazi Germany's aggression in early September, 1939.

Junkers Ju-87 (Stukas) vital to success of Blitzkrieg: Close air support was a prerequisite for the success of the Wehrmacht's Blitzkrieg operations. In 1939 and early 1940, the gull-winged, single-engine Junkers Ju-87 (Stuka) -- with three machine guns and a maximum bomb load of 1,540 pounds -- was vital to such operations. The terror sirens of these diving aircraft struck fear into those on the ground below, while their bombs and guns amplified this terror with death and destruction. However, once opposed by more modern fighter aircraft -- such as the British RAF's Spitfires and Hurricanes beginning in 1940 -- the Ju-87s proved vulnerable. They were subsquently utilized only occasionally in support of front-line offensive operations.

German general Fedor von Bock tops in the field: German general Fedor von Bock was a distinguished old-style Prussian officer who commanded the German Anschluss forces in 1938. In 1939 he commanded Army Group North during the Polish campaign and, in 1940, Army Group B during the Blitzkrieg that speedily overran the Low Countries and defeated France. Later, Bock was twice relieved of commands in Russia: first in 1941 following a failed offensive against Moscow, and subsequently in 1942 after disagreements with Adolf Hitler over operational decisions. Having survived both those campaigns and Hitler's displeasure, he was killed in an Allied air raid on May 4, 1945.

Poland succumbs to German invasion: The event that finally destroyed any residual hopes in London or Paris that appeasement might yet succeed was Adolf Hitler's invasion of Poland. At dawn on September 1, 1939, successive waves of bombers and fighter-bombers raided deep into Poland. Simultaneously, the tanks, artillery, and infantry of two German army groups, comprised of five separate armies, launched devastating attacks against the sizable but outdated and poorly deployed Polish forces. Warsaw finally fell on September 27, the effectiveness of Nazi Germany's Wehrmacht had been validated, and the Blitzkrieg concept of warfare was born.

Continue reading to learn more about the German invasion of Poland in September 1939, which marked the beginning of World War II.