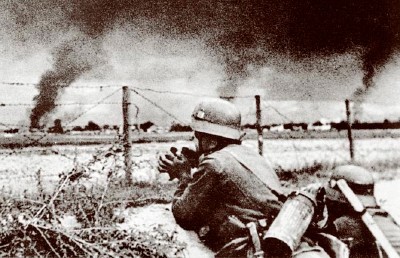 Nazi Germany continued its assault on Poland throughout September 1939. Poland's troubles were amplified by the Soviet Union's invasion at mid-month. Follow the World War II timeline below to learn more about events in September 1939.

September 8: President Franklin Roosevelt calls for a strengthening of the U.S. military and begins to use his constitutional power to call up the reserves, as the war in Europe has created a state of "limited national emergency."

September 13: Claiming that Polish civilians are attacking their troops, German military leadership vows to target Polish noncombatants, of whom thousands have already been murdered.

September 14: Germany loses its first ship of the war when a U-boat is depth-charged and sunk by British destroyers.

September 17: The Soviet Union invades Poland with 40 divisions, many waving white flags at a perplexed Polish population. Already beaten by the Nazis, Poland's army is unable to put up much of a fight, and the following day Russia will easily claim the territory it was promised by Nazi Germany when the two nations signed the Molotov-Ribbentrop Pact.

Five hundred die when the British Navy loses its first ship, the Courageous, which is sunk by a U-boat off Ireland.

September 18: Armed with inside knowledge of the German Enigma code, members of the Polish Cipher Bureau escape from Poland with two of the Enigma machines. They will arrive in Paris on October 1.

September 20: The Luftwaffe and Britain's Royal Air Force (RAF) clash for the first time, in the skies over the border between Germany and France, when German Me109s attack Fairey Battle bombers. The RAF loses two aircraft, while the Germans lose one.

Below are more highlights and images from September 1939, when Nazi Germany invaded Poland.

Warsaw puts up a fight against Nazi invaders: The German capture of Warsaw, Poland, seen here with its buildings burning on the horizon, proved costly for Germans and Poles alike. On September 9, the Fourth Panzer Division lost 57 of 120 tanks in early street fighting for the city, and the panzer commanders learned many hard lessons from this clash. However, after more than two weeks of intensive air bombardment and ground combat, characterized by a succession of closely coordinated ground and air assaults and artillery bombardments, the city finally fell on September 27.

Murder of defenseless Poles by Nazi Germany: Kazimiera Mika, a 10-year-old Polish girl, stoops over the body of her older sister. The elder Mika girl and six other women, desperate for food, had been digging for potatoes in a field in besieged Warsaw when the Luftwaffe struck. Nazi fliers swooped down to within 200 feet of the ground and attacked the group with machine-gun fire. Two were killed. As the aircraft left, Kazimiera ran to her fallen sibling. This was Kazimiera's first experience with the finality of death, and she was unable to understand why her sister could no longer speak to her.

Messerschmitt fighter bombers crucial to Blitzkrieg: Flying at 350 mph with a range of 565 miles, the German Messerschmitt Me 110 fighter-bomber accommodated a two-man crew, carried 2,000 pounds of bombs or four air-to-air rockets, and was armed with two 20mm cannons and five machine guns. The first twin-engine fighter to enter operational service during the war, the Me 110 was highly successful during the 1939 Blitzkrieg against Poland. However, it was outclassed by the RAF Hurricanes and Spitfires during the Battle of Britain in 1940, proving to be both slower and less maneuverable. It later enjoyed a renaissance as a night fighter.

Continue reading to learn more about the German invasion of Poland in September 1939 on the World War II timeline next.