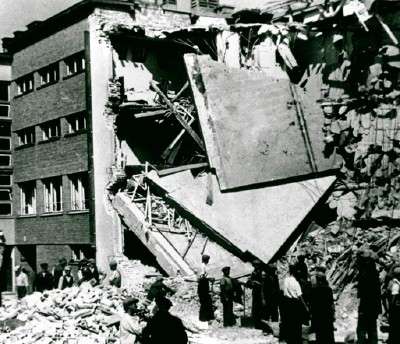 On September 25, 1939, Warsaw fell to the armies of Nazi Germany, presaging Poland's ultimate surrender. Follow the World War II timeline below to learn about major events at the end of September and the beginning of October in 1939.

September 21: Pro-Nazi Iron Guardsmen assassinate Romanian prime minister Armand Calinescu, ostensibly because he was conspiring to blow up Romanian oil fields to keep them out of German hands.

September 25: Warsaw is bombed into utter submission by the Luftwaffe. The city will surrender to the Nazis on September 27.

October 5: The last of the Polish army lays down its guns. Of the more than half-million troops that faced the Nazis in the preceding month, most were taken prisoner while roughly 100,000 died in the fighting or fled the country.

October 6: While addressing the Reichstag in Berlin, Adolf Hitler accuses Poland of initiating hostilities. He insists that he has no territorial ambitions toward England, France, Belgium, Holland, and several other countries that he will attempt to occupy in the upcoming months and years.

October 7: Adolf Hitler moves forward with his plan to evict or kill Poles and annex their territory. He calls for the "elimination of the harmful influence of nationally alien populations, which constitute a danger to the Reich."

October 12: Rejecting Hitler's insincere peace proposals, British prime minister Neville Chamberlain asserts that "no reliance can be placed upon the promises of the present German government."

Below are more images and headlines from September and October of 1939, when Poland fell to Nazi Germany and Adolf Hitler advanced his plans for conquest in Europe.

German attack leaves Warsaw in ruins: When the first assaults against the Polish capital proved unsuccessful, the Germans besieged Warsaw. They systematically bombed and shelled the city, causing extensive destruction and loss of life. The city's own air defenses were overwhelmed by the tempo of the Luftwaffe onslaught, while the outclassed Polish air force was effectively neutralized by September 17. Much of Warsaw's industrial and commercial heart -- including its great complex of flour mills

-- was set ablaze, and its system of water-pumping stations and filtration plants was extensively damaged.

Nazis force Jews to dig their own graves: Soon after the German victory, the SS death squads in Poland began their work of dealing with what the Nazis termed the "Jewish question." These two Polish Jews are about to be murdered once they have completed digging their own graves. Such denigration contributed directly to a victim's dehumanization, and consequently to a perverse legitimization by the Nazis of such atrocities. Of the approximately six million European Jews murdered during the Holocaust, 2.9 million were Polish.

Threat of attacks lead to evacuation of British children: In Great Britain's "Pied Piper" evacuation, nearly three million people moved from London and other cities to rural locations that were considered safe from German air attacks. Most were schoolchildren -- often from poor neighborhoods -- who had never met the families they would live with during the war. Pictured are some of the young evacuees. Some parents, including the Royal Family, kept their children in town with them as a patriotic gesture.

General Karl Rudolf Gerd von Rundstedt carries out Adolf Hitler's wishes: General Karl Rudolf Gerd von Rundstedt mounted the coup that destroyed the last legal government of Prussia in 1932. Despite being removed (together with other senior army officers) by Adolf Hitler in 1938 during the Blomberg-Fritsch crisis, Rundstedt was recalled to duty in August 1939 to lead the Polish invasion. He commanded Army Group South throughout that campaign. His undoubted talents as a field commander and staff officer were employed against France in 1940, and subsequently elsewhere. Rundstedt always served within or close to the high command. He was enthusiastic about the mass killing of Jews, and accepted huge bribes from Hitler.

The following page is a timeline of the important World War II events of October 1939, when Nazi Germany conquered Poland.

"I have still to find a German, even among those who don't like the regime, who sees anything wrong in the German destruction of Poland. All the moral attitudes of the outside world regarding the aggression against Poland find little echo among the people here. People of all classes, women as well as men, have gathered in front of the windows in Berlin for a fortnight and approvingly gazed at the maps in which little red pins showed the victorious advance of the German troops in Poland. As long as the Germans are successful and do not have to pull in their belts too much, this will not be an unpopular war."