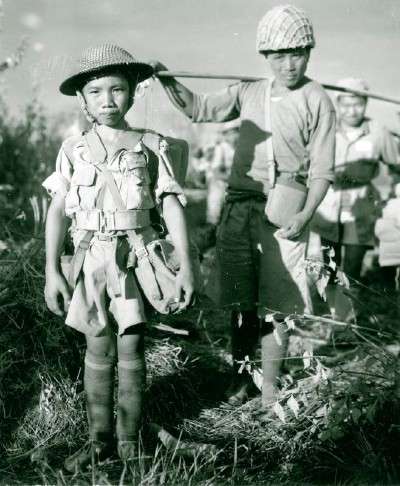 In December of 1944, Greece fell into civil war and Allied forces continued to attack targets in Southeast Asia. See the detailed World War II timeline below for more events in December 1944.

December 8: American air forces launch a lengthy offensive against Japanese positions on the island of Iwo Jima. They will spend more than two months softening the Japanese defenses prior to the ground assault.

December 10: Representatives of the Soviet Union and France meet in Moscow and sign a 20-year treaty of friendship and aid.

The Allies build the world's longest bridge, at 1,154 feet, across Burma's Chindwin River.

December 16: The Battle of the Bulge begins when the Germans orchestrate a huge strike against U.S. positions in Luxembourg's Ardennes Forest.

December 17: Sixty-seven American POWs lose their lives in the Malmedy massacre when a German unit randomly opens fire on a group of 170 prisoners. No motive is apparent.

The 509th Composite Group assembles at a site in western Utah for a special high-speed, high-altitude bombing mission over Japan.

Read below for headlines and images from World War II events of 1944.

Japanese desperate for food: In 1944 Japan's food shortages worsened. Wild dogs roamed Tokyo streets searching for food, but sometimes became food themselves. Civilians began farming crops and raising animals in the Olympic Stadium, built for the canceled 1940 Games. By 1941 nearly all arable land -- including golf courses -- had been brought under cultivation, but Japan still imported most of its soybeans and sugar. Domestic rice crops and imports helped people fend off starvation until the last year of the war. In 1945 shortages engendered by strategic bombing and the submarine blockade led to mass flight to the countryside and suffering in the cities and towns.

The young Kachin Rangers of Burma: In the Burma campaign, indigenous groups -- such as the Kachin, Karen, and Chin peoples -- assisted the Allies. The "Kachin Rangers" scouted and provided flank guard for the American Galahad force, known colloquially as "Merrill's Marauders." On May 17, 1944, Kachin and Chinese forces aided the Americans in capturing the Myitkina airstrip. This photograph, taken at the airstrip that month, reportedly shows a 10-year-old Chinese soldier waiting to be flown to China. However, at least one of these boys may be Kachin. The Kachin Rangers included young boys who often carried submachine guns and traditional swords. The boy at left wears a predominantly British uniform.

Civil war in Greece: The liberation of Greece from Axis occupation in October 1944 did not bring peace to the country. EAM-ELAS (National Liberation Front-National Popular Liberation Army), the Communist-led resistance movement against Axis occupation, controlled about two-thirds of Greece by the time the Germans evacuated. The ELAS (the organization's military wing) refused Greece's postwar government's demands to disarm. This refusal led to violence in Athens between Greek guerrillas and British forces, including these paratroops from the Fifth Parachute Battalion, part of Britain's Second Parachute Brigade. Civil war continued to rage in Greece until 1949.

See the next section for a detailed World War II timeline of events in late December 1944.

Typhoon in the Philippines

On December 17, 1944, U.S. Task Force 38 was 300 miles away from its destination: Luzon, Philippines. As the ships prepared to refuel at the island of Mindoro, winds began to pick up. "A moderate cross swell and a wind varying from 20 to 30 knots made fueling difficult," Admiral William Halsey recounted in his autobiography. He was told by his staff aerologist that it was only a "tropical disturbance."

As the storm intensified, Halsey suspended refueling and ordered his ships to move away from the storm. It was no longer a "tropical disturbance" but a typhoon. On December 18, it was on a collision course with the task force. Many of Halsey's destroyers were very low on fuel, causing the ships to ride treacherously high on the sea. As the center of the typhoon passed close to the task force, hurricane-force winds buffeted massive waves against the helpless vessels. "Shortly after twelve o'clock...," an officer on the destroyer Hull later reported, "the wind velocity increased to an unbelievable high point which I estimated at 110 knots. The force of this wind laid the ship steadily over on her starboard side."

When the storm passed, Halsey recounted, it had "swamped three destroyers, cost the lives of 790 men, wrecked some 200 planes, and damaged twenty-eight ships." Over the next three days, every able ship and plane searched desperately for survivors. Following the disaster, the worst the U.S. Navy had suffered in a storm since 1889, new weather stations and offices were established across the Pacific.