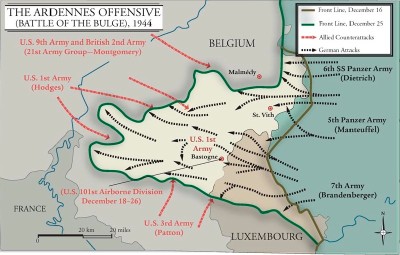 In December of 1944, the U.S. turned its attacks to Japanese forces in China. The detailed World War II timeline below summarizes events in late December 1944.

December 18: The U.S. tries to put a lid on recent Japanese gains on the Chinese mainland by directing a series of B-29 raids against Japanese positions around Hangkow.

December 19: Some 130 Belgian civilians, accused of sheltering U.S. troops, are murdered by members of the Nazi Gestapo.

December 22: Surrounded with his 101st Airborne Division in the Battle of the Bulge, Brigadier General Anthony McAuliffe receives a surrender ultimatum from the Germans, to which he delivers his immortal reply: "Nuts." In later years, he would suggest that his actual reply was a stronger four-letter word.

December 24: Members of the German Sicherheitsdienst avenge an attack by the Belgian resistance by murdering nearly all the young men in the village of Bande. One, Leon Praile, is able to escape.

More than 800 U.S. soldiers die when the U-486 sinks the American troop transport Leopoldville in the English Channel.

December 26: U.S. tanks break through the German line and end the Bastogne siege as well as the Ardennes offensive. Though they initially had been victorious locally, German forces are greatly depleted.

See the headlines and images below for more information on events that occured during World War II.

Production woes doom German Messerschmitt Me 262 jet: The potential of Nazi Germany's highly capable Messerschmitt Me 262 jet fighter was squandered because of slow production of the Junkers Jumo 004 jet engine that powered it. It was not because, as is commonly held, Hitler insisted that the plane be utilized as a fighter-bomber rather than as a pure fighter. The 540-mph 262 (America's P-51 Mustang could reach 437 mph) did not see combat until July 1944, too late to affect the D-Day landings or the war's larger outcome. Although some 1,400 Me 262s were delivered, fewer than 300 saw combat. During the same period, Britain fielded perhaps 20 Gloster Meteor jet fighters, and Nazi Germany experimented with the Komet, a difficult-to-fly Messerschmitt rocket plane capable of speeds just shy of 600 mph.

The U.S. Army's Women's Army Corps: Members of the U.S. Women's Army Corps (WAC) faced objections from military and civilian conservatives who did not believe that women should be in uniform. When WAC began in 1942 as a special unit of the U.S. Army, its members were the first women other than nurses to serve with the U.S. Army. More than 150,000 American women took this opportunity to contribute to the war effort, filling such important military and industrial positions as clerk, stenographer, telephone operator, scientific technician, teletype and cryptographic technician, and mechanic.

American POWs suffer in freezing weather: The bodies of 67 American POWs lie in the Belgian snow, murdered on December 17, 1944, by a Waffen-SS unit under the command of SS major Joachim Peiper. Those who escaped the Malmedy massacre reported the cold-blooded killings, and word reached U.S. front-line troops quickly. Apparently in response, a December 21 written order from the U.S. 328th Infantry Regiment read: "No SS troops or paratroopers will be taken prisoner but will be shot on sight."

Attacks and counterattacks in Belgium: Adolf Hitler ordered a major offensive in the West in December 1944 because he believed that it would split the Anglo-U.S. alliance, frustrate the Allied advance, and ultimately precipitate a situation similar to Dunkirk. The German strategic objective was Antwerp, Belgium, and the main attack was launched against the Americans out of the dense, snow-covered forests of the Ardennes. Elite Waffen-SS and armored units spearheaded the assault, initially advancing rapidly against the surprised and demoralized GIs. However, the heroic defense of Bastogne by the U.S. 101st Airborne Division, overwhelming artillery and airpower, and decisive counterstrokes mounted by Patton and Montgomery finally restored the Allied situation by the end of December.

Battle of the Bulge: On December 16, 1944, Nazi Germany began a massive attack in the Ardennes region of southern Belgium. The Germans forced a "bulge" in the faltering Allied advance, plunging surprised U.S. forces into some of the fiercest fighting they would endure in Europe. According to Kenneth Koyen, an officer in the Third Army, U.S. forces did not call the engagement the Battle of the Bulge in its early days, instead referring to it as the German Breakthrough. "The end and the outcome were not yet in view," recalled Koyen, "and the desperate German assault cast a chill over the battleground."

GIs die in frigid weather in Ardennes: A Sherman tank rolled past another U.S. armored vehicle that has slid off an icy road in the Ardennes on December 20, 1944. Weather was the Allies' worst handicap during the first days of the Battle of the Bulge -- and the Germans knew it. They deliberately began their attack when poor visibility restricted air support for U.S. ground forces. Most of the battle's staggering number of American casualties took place during the first three days. The coldest, snowiest weather that the rugged, mountainous forest had seen in memory took a serious toll on U.S. troops.

German infiltrators penetrate U.S. lines: A German commando was captured wearing an American uniform during the Battle of the Bulge. The surprise offensive was accompanied by an elite unit of English-speaking Germans trained to gather intelligence, conduct sabotage, and raise general havoc behind Allied lines. Small groups of these commandos, riding captured American jeeps and wearing GI uniforms, managed to penetrate U.S. lines in the early hours of the attack, causing great consternation. Considered spies, those unfortunate enough to be captured were shot.

Americans face numerous obstacles in Ardennes: German forces took effective advantage of cloudy skies in the early stages of their surprise Ardennes offensive. Although American planes were able to take to the air when blue skies returned, that didn't automatically diminish the determination of German infantry, or the danger to American soldiers. A snowy landscape, coppices of trees that might conceal German troops and armor, loosely defined lines, the continuing cold -- all of these took a toll on American troops as they regrouped to push the Germans back.

German forces depleted in Belgium: U.S. soldiers watch Allied and German planes battle on Christmas Day, 1944. The weather over Belgium had recently cleared, and Allied aircraft were finally able to support ground troops in a counterattack against the Germans. Hitler's belief that the Western Allies were weak and divided proved unfounded. Montgomery's British forces attacked from the north, Patton's U.S. Third Army attacked from the south, and American troops successfully defended the town of Bastogne. Beginning on January 8, the Germans retreated from the Ardennes. The Battle of the Bulge had been frightfully costly to all combatants. American casualties numbered about 81,000, and German casualties were between 60,000 and 100,000. But Nazi Germany's loss of men and materiel was irreparable.

See the next section for a detailed World War II timeline of events in January 1945.

On Sunday, December 17, 1944, shortly after the Germans launched their great offensive in the Ardennes, a number of American prisoners were shot by soldiers of the First SS-Panzer Regiment at Baugnez crossroads, close to the Belgian town of Malmedy. The true scale and circumstances of the Malmedy massacre remain controversial to this day. What is known is that of the 113 prisoners assembled in the field at Baugnez, 67 died there. Forty-six of them, some of whom were wounded, managed to escape the scene.

The massacre began when some of the Germans opened fire. Several survivors claim to have heard an order given. A storm of machine gun and rifle fire lasted for 15 minutes, and was followed by deliberate shots to finish off anyone still showing signs of life. These final murderous coups de grace turned a possible "battle incident" into an indisputable atrocity that resonated throughout the American forces in Northwest Europe. It immediately prompted orders in some U.S. Army units to summarily shoot any SS prisoners they might capture.

Although those believed responsible for the massacre were later tried by a U.S. military tribunal, serious coercive and procedural irregularities by the prosecution eventually resulted in the commutation of all of the many death sentences. Those who had been imprisoned received early releases, and by 1960, all had been released.

"A bullet went through the head of the man next to me. I lay tensely still, expecting the end. Could he see me breathing? Could I take a kick in the groin without wincing?...He was standing at my head. What was he doing? Time seemed to stand still. And then I heard him reloading his pistol in a deliberate manner...laughing and talking. A few odd steps before the reloading was finished and he was no longer so close to my head, then another shot a little farther away, and he had passed me up. "