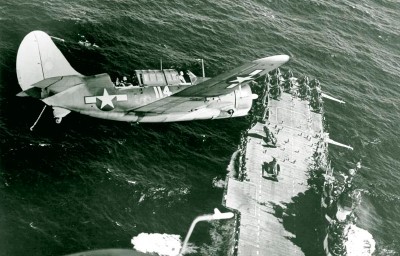 In January of 1945, the Allies had made huge strides in securing much of Europe from Nazi forces. The detailed World War II timeline below summarizes events in late January 1944.

January 15: Commercial shipping resumes in the English Channel for the first time in nearly five years.

January 16: Hitler moves both his residence and base of operations to the underground bunker at Berlin's Reich Chancellery.

January 17: The Red Army liberates the Polish capital of Warsaw.

January 19: The Germans retreat before the Red Army's advance through Poland. The Russians occupy the Polish cities of Tarnow, Lodz, and Krakow.

January 20: President Roosevelt is sworn in for his fourth term in office.

January 25: In the largest naval mining campaign of the Pacific war, the Allies seed the waters off Singapore and Indochina with nearly 370 mines.

January 26: The Soviet Union army liberates Auschwitz. They find nearly 3,000 inmates still in residence, with many near death.

January 27: The Japanese lose about 100 planes in U.S. counterattacks on Japanese air bases on Okinawa.

January 28: The Battle of the Bulge draws to a close as the last German soldiers are forced into retreat.

For the first time in nearly three years, supplies reach China over the Burma Road, which is newly reopened and renamed in honor of Allied general Stilwell.

January 30: With the Red Army less than 100 miles from Berlin, a defiant Hitler delivers his final radio address.

­Seven thousand die when the German liner Wilhelm Gustloff is sunk by a Soviet Union submarine.

Below are more highlights and images that outline events that took place in 1945 during World War II.

Americans liberated in the Philippines: Reduced to skin and bones by three years of captivity, American civilians Lee Rogers and John C. Todd sit outside the gym at Santo Tomas University in Manila. They had been liberated by the U.S. First Cavalry Division on January 3, 1945. Santo Tomas was the primary internment center for American civilians following the fall of the Philippines, housing an average of about 4,000 internees. Though the civilians at Santo Tomas and other camps suffered from food shortages and overcrowding, they endured less brutality than Allied military prisoners and even managed to set up a school for the children.

The indomitable USS Hornet: Curtiss Helldivers fly over the USS Hornet (CV-12) in January 1945. This was the second American aircraft carrier of that name. The first (CV-8) had launched the Doolittle Raid, fought at Midway, and been sunk at the Battle of Santa Cruz in 1942. CV-12 was in continuous action for 16 months from 1943 to '45. It was attacked 59 times, but never hit. In contrast, its aircraft sank or damaged 1,269,710 tons of enemy shipping and destroyed 1,410 Japanese planes. The Hornet supported virtually every Pacific amphibious landing from March 1944, and contributed substantially to victory in the Battle of the Philippine Sea. In February 1945, it launched air strikes on Tokyo.

Soviet forces liberate Auschwitz: As the Red Army pushed westward in Poland, it arrived at the Auschwitz camp complex on January 27, 1945. "I saw the faces of the people we liberated," Soviet Union major Anatoly Shapiro recalled. "They went through hell." Nine days before the liberation, 60,000 prisoners had been marched from the Auschwitz complex to other camps out of the immediate reach of Soviet Union troops. About 7,000 inmates were left behind and freed. Auschwitz survivors enthusiastically welcome their liberators.

"Wherever a joyous bird sings, he sings for another. Wherever a tiny star twinkles far away, it twinkles for another." This gentle poem was written by one of the most vicious German officers of the Second World War. Raised a Catholic, Dr. Josef Mengele, the "Angel of Death," was chief medical officer at Auschwitz.

Mengele was one of the first Germans seen by new arrivals as they entered Auschwitz. Dressed in an immaculate white medical coat, he decided who should live and who should die. Many of those chosen to live would become subjects of Mengele's merciless medical experiments. He was particularly interested in twins, engaging in such practices as injecting chloroform directly into twins' hearts to test comparative organ reactions. On more than one occasion, he took two healthy twins and joined them together to create Siamese twins. The majority of those who survived the experiments were eventually killed. The flesh on many corpses was boiled from bones, which were then sent to the Anthropological Museum in Berlin.

Mengele was not the only German physician who experimented on helpless prisoners. Also at Auschwitz, Dr. Horst Schumann exposed men's testicles to massive doses of X-rays before removing and examining them. Doctors Eduard Wirths and Carl Clauberg examined women's wombs after injections of toxic chemicals. These experiments were designed for the development of techniques of mass sterilization of people. Other physicians experimented on prisoners at Buchenwald, Dachau, and other German concentration camps.

At the Nuremberg Trials following the war, 23 German physicians and scientists were tried from December 1946 to August 1947. Mengele was not included. He had escaped to South America, where he died in 1979.

The experiments conducted by the convicted doctors were grouped into 12 categories, including: high altitude, freezing, malaria, seawater, sterilization, and incendiary bomb. In each one, human subjects faced unnatural conditions that for most resulted in horrifying deaths. Of those physicians tried at Nuremberg, seven were acquitted, seven were sentenced to death, and nine were imprisoned.