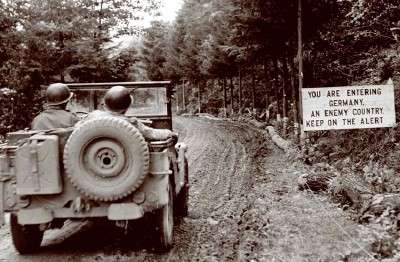 As World War II continues through 1944, Hungarians try to make peace with the Allies and intense fighting with the Japanese persists. See the World War II timeline below for these and other events throughout October of 1944.

October 13: Stalin once again assures his Allied partners that the Soviets will declare war on Japan, but he insists that he cannot spare the resources until the Allies gain Nazi Germany's unconditional surrender.

October 14: German general Erwin Rommel, suspected of having collaborated with the July 20 conspirators, swallows poison after being told by Hitler's chief of army personnel that unless he commits suicide, the Nazis will put him on trial and his family will lose its pension and an estate that had been given to him. The official party line will be that Rommel died of the wounds he suffered in the July Red Army Forces attack.

October 18: Premier George Papandreou of Greece is restored to power four days after the last German soldier leaves the ancient capital of Athens. The Germans were driven out by Greek partisans and Allied forces.

Reeling from losses at Leyte Gulf and elsewhere, the Japanese launch Operation Sho-Go (Victory) in a desperate bid to regain lost territory and protect the Japanese home islands.

October 20: In conjunction with Josip Broz Tito's Army of National Liberation, the Soviets liberate Belgrade, Yugoslavia, from the Germans.

The liberation of another concentration camp, the Allies entrance into Nazi Germany, and cruel Red Army rampages are a few of the topics covered in the World War II headlines below.

Allies liberate the Herzogenbusch concentration camp: Jews began to be deported to Herzogenbosch, a German concentration camp, in January 1943. While some were forced to work in local factories, others were temporarily held there before being sent to extermination camps in Nazi Germany. The camp eventually held more than 30,000 inmates, including Jews, political prisoners, and captured resistance fighters. By the time the camp was liberated in September 1944, about 13,000 had died there. Most of the victims bodies were cremated at this camp built outside the Dutch town of Vught.

Allied Troops' Operation Market Garden: Allied tanks rumble across the bridge at Nijimegan during Operation Market Garden in September 1944. The brainchild of British general Bernard Montgomery, Market Garden was a bold but risky attempt to establish a bridgehead over the Rhine in southern Holland. Three airborne divisions were to seize key bridges at Eindhoven, Nijmegan, and Arnhem along a 64-mile route through Holland, opening the way for a lightning ground advance by the British XXX Corps. The gambit failed when the ground force was unable to meet its four-day timetable due to constricted terrain and unexpected German resistance. Isolated at Arnhem, the British First Airborne Division was destroyed after holding out for 10 days.

Allies enter Nazi Germany: General Dwight Eisenhower's three army groups reached the German border in September 1944 with superior forces and firepower. However, they were slowed by acute gasoline and ammunition shortages, as well as by determined German troops. Many of the latter had dug in along the defensive Siegfried Line, which was newly rearmed, at Hitler's orders, with pillboxes, gun emplacements, tank traps, and other obstacles. To make matters worse, the American advance came during the wet season; daily cold rain turned the rough terrain to mud. By early October, when U.S. soldiers (pictured) drove into Nazi Germany, front-line American commanders realized that the German homeland would not be occupied quickly.

See the next section for a detailed World War II timeline of events that occurred in the Pacific and Europe in October 1944.

The Life of a Replacement U.S. Army Soldier

Every belligerent nation confronted the question of how best to integrate replacements for casualties. The German and British armies generally sent each reinforcement to a unit raised in his home region, although this became less practical as the war intensified and casualties mounted. German and British replacements undertook basic training, then joined a reinforcement unit -- such as a regiment or company -- that would be integrated into a front-line unit.

The U.S. Army system was notoriously alienating. Individual soldiers were allocated from replacement depots ("repple depples") to replace casualties, who once recovered would frequently be sent not to their home units but wherever there was a gap. These processes fostered ano­nymity, neglect, and even contempt.

Reinforcements in all armies faced a difficult initiation and died in disproportionate numbers. Their initial training was often inadequate, so they required last-minute, front-line instruction. Such "green" recruits endangered their more experienced compatriots, who often left them to sink or swim. If they survived their first action and demonstrated willingness to contribute, they were usually accepted as comrades.

The need for new men grew in the second half of the war. Young reinforcements became the lifeblood of the Allied armies in 1944-45. The German and Soviet Union armies included many reinforcements from acquired or "liberated" territory. Many of these men were often conscripted against their will and thus were of dubious military value.