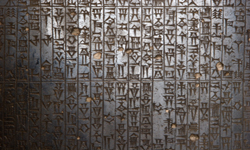 A relief of the Code of Hammurabi.
©iStockphoto.com/jsp

The concept of revenge is as old as history. Almost since the dawn of the written word, humans have had the desire to exact vengeance on others who have wronged us. For example, The Code of Hammurabi, the code of law from the sixth king of Babylon, was implemented about 1760 B.C., making it the oldest recorded set of laws in human history. The code is rooted firmly in the belief in an eye for an eye; in fact, that's almost exactly how the concept was phrased.

The Code of Hammurabi marked the official beginning of standardized revenge. It informs our way of thinking today. Indeed, our modern legal system is based on society's ability to carry out revenge against those who break its laws.

Yet our thirst for vengeance goes far beyond the social contract. The desire to see harm befall those who wrong us begins on a very personal level, within the brain of the victim. Neuroscientists have found that the dorsal striatum, a part of the brain responsible for reward, also governs revenge.

What follows, in no particular order, are 10 examples of people where someone's dorsal striata kicked into overdrive, leading to some of the biggest cases of revenge in human history.