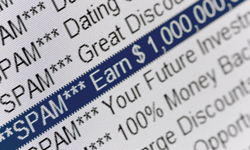 In 2003, enough people had access to the Internet that spam e-mail had become a problem worthy of national attention. At the heart of the controversy was a Michigan entrepreneur named Alan Ralsky, who became known as the "spam king," for sending millions of bulk e-mail come-ons for a variety of businesses. As a result, some critics of his business model called Ralsky "vermin" and "scum" [source: Kurth].

When an article in a local paper spotlighted Ralsky's lavish lifestyle, including his 8,000-square-foot (743-square-meter) home, some of those critics managed to find the spam king's physical address. In a bid for revenge for all of the spam e-mail they'd received through his business, the naysayers signed Ralsky's address up for junk mail on a number of sites around the Internet. Eventually, thousands of Internet trolls propagated the address across the Web. At the peak of the revenge scheme, Ralsky's home received hundreds of pounds of junk mail each day [source: Leyden].

In 2009, Ralsky pleaded guilty in federal court to fraud for a penny stock manipulation scheme. He received a 51-month prison sentence [source: Jennings].