by John Donovan Jul 1, 2019
A young Magda is seen here before the Holocaust with her parents, Herman and Serena Mozes. Courtesy Magda Herzberger

In the waning months of World War II, Magda Herzberger's life ended, and a new one began. That second life, the one she lives now, was born out of one of the most horrific atrocities that humans ever have committed against each other.

Yet now, nearly 75 years later, that second life inspires, offering a still-steady voice of hope — and of warning — to anyone willing to listen. Herzberger, 93, is among the dwindling number of souls known as Holocaust survivors.

What she has to say is important. Maybe now more than ever.

"I have seen everything," Herzberger says from her home in Fountain Hills, Arizona. "I am an eyewitness, and being an eyewitness, I can never be silent."

A Lifetime of Reliving the Holocaust

Herzberger was born in Cluj, Romania, in 1926, the only child of Herman Mozes and his wife, Serena. Herzberger was brought up in orthodox Judaism, regularly attending synagogue. Every week, her family welcomed poor neighbors into their home to share the Sabbath.

In the 1940s, as was true in much of Europe, Romania was trapped in a rapidly expanding war. When the Germans took over Hungary in 1944 (Cluj had been part of the territory that earlier had been awarded to Hungary), the Nazis forced thousands of Jews from their homes. Herzberger remembers it well.

"When we were taken out from our home, we were taken out by special Hungarian police. They were 100 percent collaborating with the Nazis. They were very brutal. Very cruel," she says. "I had a little book of mine. I had been writing short stories. I didn't have anything to take of my own except for that. My spiritual self was meaningful; part of my spiritual self was that book I had been writing in for eight years. That was all I wanted from the house.

"And this miserable brute Hungarian gendarme looked at me and said, 'What are you holding there?' And I said, 'This is my little book.' And he smiled — I hadn't experienced evil in my life — and said, 'Can I have a look at this?' and he took the book and he tore it into pieces in front of me. I was terrified. I felt like something was cut out from myself."

Her terror was just beginning. The Nazis herded her family onto trains to Auschwitz, the Nazi extermination camp in Poland where almost 1 million Jews were murdered. There, Herzberger saw her father for the final time. She was 18 years old.

Magda (in the center of the box) during roll call at Auschwitz, when prisoners had to stand still in thin clothing for hours to be counted by the block kapo.
Courtesy Magda Herzberger

Over the next year or so, Herzberger made her way through three camps, including a nine-month forced-labor stay at Bremen-Farge, where German submarines were built, and a shorter stop at Bergen-Belsen, used to house, among others, prisoners of war. It was at Bergen-Belsen that Herzberger and 60,000 other sick and emaciated prisoners, barely living among thousands of dead and unburied, finally were liberated by British troops on April 15, 1945.

The stories from these places — stories that Herzberger has told now hundreds of times, in talks to small groups and in front of filled auditoriums, in recorded survivor tales, in books of poetry and in her autobiography "Survival" — are harrowing.

One of her duties was carrying dead bodies to mass burial spots and to the ovens for cremation. She was marched from one camp to the next and watched as others died and were killed on the journey. She saw the hopelessness of prisoners flinging themselves to their deaths onto fences around the camps. She considered suicide. She witnessed disease and starvation and unimaginable cruelty.

She remembers it all.

"At [the time before the war], we Jewish people had a good life. My grandfather was a businessman. A successful businessman. I had many aunts and uncles, cousins," she says. "My family was wiped out, almost all of us. All our little kids, and all our pregnant women, and all our old people, were gassed and cremated in the ovens.

"I have seen the flames bursting from the high chimneys of the crematories, and I have breathed the air, the odor of sweet burning flesh. I have seen the big flames belching from those chimneys.

"The Holocaust is burned into the depths of my soul," she adds. "All these horrific memories, they burn."

On her day of liberation, plucked from among the dead at Bergen-Belsen by a weeping soldier, she vowed never to forget. She wasn't able to stand for three months after her rescue, and wasn't able to speak deeply of her ordeal for years. She didn't publish her autobiography until 2005, when she was 81. "I had to be very, very far away from the Holocaust to be able to do what I did in my book," she says.

But she speaks now freely and with a sense of urgency. From Memorial, in her book of verse, "The Waltz of the Shadows":

I mourn you, innocent victims,
Members of my family,
My fellow prisoners,
Who were silenced forever
By the Nazis.
Your wailing cries
And your terrible contortions
Met deaf ears
And blind eyes.
I was destined to live,
To bear my misery.
God chose me to return,
To remind the world
Of your agony,
Erecting tombstones
In your memory
Prisoners of Auschwitz-Birkenau concentration camp are led through the camp gate in 1945.
Wojtek Laski/Getty Images

How to Pass on the Lessons of the Holocaust

Back in 1980, Herzberger spent nearly 10 hours with an archivist from the Wisconsin Historical Society, retelling her life story. In 2014, she met with the University of Southern California's Shoah Foundation, founded in 1994 by filmmaker Steven Spielberg, in order to videotape and preserve interviews with survivors and other witnesses of the Holocaust.

In January 2017, Herzberger and her daughter traveled to Atlanta as a guest of Am Yisrael Chai, a nonprofit Holocaust education and awareness program. Herzberger was the keynote speaker for a program titled "Fortitude and Endurance."

Now in her 90s, Magda speaks freely of the Holocaust, and with a sense of urgency.
Courtesy Magda Herzberger

In her address in Atlanta, she strode confidently across the stage, hands clasped in front of her, gesturing forcefully at times and only occasionally holding a rail for support. She stared deeply into the audience — she never uses notes — and her voice rose as she spoke of the flames of the crematoriums and carrying corpses to mass burial. She recited her poem "Requiem" — They were the victims of their faith/Sentenced to death without a sin/For worshipping the only God they believed in — and played a recording of a composition she had written.

"After this, I warn you," she said with a smile, looking into the faces in front of her, "I am not through."

Almost 91 years old at the time, she spoke for more than an hour.

Herzberger caters her presentations to different audiences. She has a children's book, "Tales of the Magic Forest," which contains a story she relates to 5th and 6th graders. Mother Sea's children, water drops, are pulled up by dark clouds and taken to a place far, far away. "I don't want to scare the children so they have nightmares," Herzberger says, "but they understand very well."

In 2018, she spoke to a large group at Grand Canyon University in Phoenix, sporting the same polka-dot outfit she wore in Atlanta.

"You may ask, why don't you pick something new?" she said to the crowd. "Because this represents something. It's black and white, just like the two parts of my life."

Herzberger continues to be asked to speak all over the country and is planning yet another book. She realizes that, as one of the relatively few remaining survivors of the Holocaust, hers is a voice that needs to be heard.

And given the current state of the world — from the continued unrest in the Middle East to the rise of hate speech and antisemitism at home — she realizes her work is far from done. Still, with all the dangers in the world, after all the horror she's seen, all the pain she's endured, all the people she's lost, her message remains one of hope.

"It's not easy to forgive, you see, especially in something in which you were really hurt badly. But you have to be able to forgive in order that you will have peace, yourself," she says. "I don't believe in hatred. Hatred doesn't lead to help. If we are hating each other, we are not going to be in peace with each other, ever.

"If we don't learn from each other, if we are in constant hostility, we become weak. Together, we are strong."

NOW THAT'S INTERESTING
Herzberger never saw her father again after Auschwitz, but her mother survived and was reunited with her daughter in Cluj six months after the Word War II ended. Her mother died in 1994 at the age of 93. Magda married her husband Eugene Herzberger, a neurosurgeon, in 1946. After nine years in Israel, in 1957 they emigrated to the United States, settling in Wisconsin and, later, in Iowa. She and Eugene, now 99, raised two children and have called Arizona home since 1994. 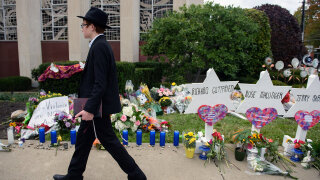 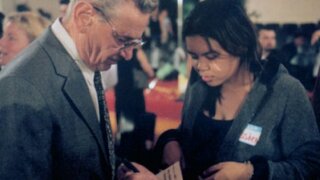 How the Shoah Foundation Works 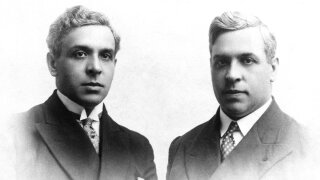