Who Were the Vikings? 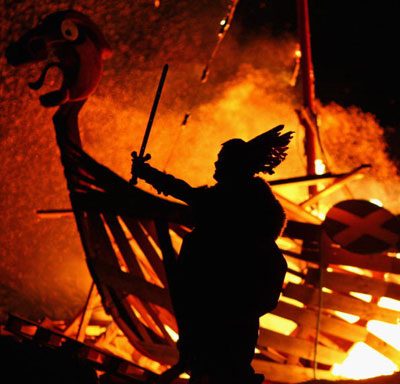 While the term Viking is used in a general way to describe the people of Scandinavia during the medieval period, it's really a name for a profession -- it's like if we called all Spanish or French people Pirates. The Scandinavians were also explorers, farmers, fishermen and merchants -- not just Vikings. Indeed, the people who are usually referred to as Vikings were actually made up of several different groups, including the Danes, the Swedes and the Norwegians, who were themselves often broken into small petty kingdoms.

The actual Vikings were all men. They used their expertise at seamanship and battle to make raids on the towns and churches of neighboring kingdoms. These raids were part of an intensely masculine, warlike culture that emphasized battle as a way for a man to prove himself.

Going on such a raid was known as going "i viking" [source: Haywood 2000]. The true origin of the word Viking is lost to history, and there are many competing theories. Some suggest it's derived from an Old Norse word, vikingr, which means "pirate" [source: MacShamhrain]. However, it's likely that vikingr originated with the Vikings' victims and was only later adopted by the Vikings themselves. Thus, it may come from the Old English word wic, which means "port of trade," referring to the Vikings' habit of attacking such places [source: Haywood 2000]. Yet another theory suggests that it's based on the Norse word vik, meaning "bay" or "body of water," or a similar sounding word which meant "to turn away" or "to leave on a journey" [source: Cohat].

In any case, the modern conception of the term Viking comes from the written historical records of the time. Most literate people in that era were church officials. Vikings tended to attack churches for their wealth. Christians were especially horrified by these attacks, because they defiled the sanctity of such places. As a result, most of the surviving written records come from Christian accounts and depict Vikings in a particularly harsh light. That isn't to say that such a depiction isn't justified -- the Viking attacks on European towns and churches were brutal and terrifying -- but it only presents one aspect of Scandinavian culture.

We'll look at the traditions and culture of the Vikings in the next section.

The region known as Scandinavia consists of Sweden, Norway, Denmark and territory extended much farther into Germany, and cultural similarities are often used to link Iceland and Greenland to the region. The territory was originally settled by Germanic peoples, and developed in relative isolation because it remained outside even the most extreme northern boundaries of the Roman empire [source: Haywood 2001].

These people were hardened by the conditions of the region -- mountainous, cold, with little land suitable for successful farming. Surrounded by the sea, they became adept at fishing. Blessed with plentiful forests, they built many boats and developed extraordinary skills at sea. Bog iron could be collected without labor-intensive mining, providing the raw material for armor and weapons.