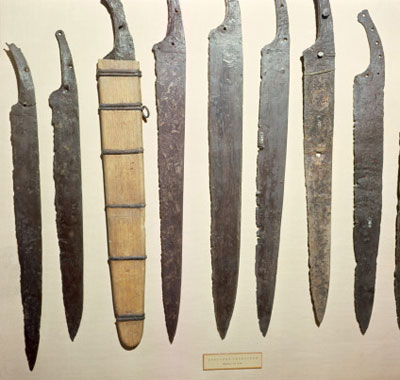 When the Northmen went i viking, they were well-armed and armored. Although a variety of weapons were used, including bows, lances and javelins, Vikings most commonly carried sturdy axes that could be thrown or swung with head-splitting force. The Viking longsword was also common -- a typical sword was about as long as a man's arm.

For armor, Vikings wore padded leather shirts, sometimes fronted by a breastplate of iron. Wealthier Vikings could afford chain mail shirts. They wore helmets of iron as well. Some were made of a solid piece hammered into a bowl or cone shape. Others were made of separate pieces riveted to an iron headband and riveted at the seams, or used leather to connect the pieces. An iron or leather nosepiece extended down to protect the face -- in some cases a more elaborate face guard was built to surround the eyes. Cheek guard extensions weren't uncommon. Viking shields were made of wood, again often fronted with pieces of iron.

A replica of a Viking helmet
Photo courtesy of Hurstwic

One thing Vikings almost certainly did not wear on their heads was a horned helmet. Such a device would be impractical in battle, with excess weight poorly distributed, offering no real protective value. Archaeologists found such helmets at Scandinavian settlements and, in the absence of technology that allows us to date things precisely, assumed they belonged to the Vikings. Such helmets may have been worn by Scandinavian chieftains in the pre-Viking era. The image of the Viking in a horned helmet was cemented by use as costuming in operas, the preeminent pop culture entertainment in the 17th and 18th centuries.

Along with their weapons, the Vikings are well-known for their boats. The Viking longship, with which they are usually associated, was not the only type of vessel the Scandinavians built. They made merchant ships and cargo vessels as well. However, all of their designs have several common characteristics:

The hulls were coated with tarred animal fur to seal them against water. In all, a typical 70-foot longship would have required 11 trees, each three feet in diameter to build, plus a very tall tree to make the keel [source: Wolf]. Warships were narrower and had more oars to increase speed. The oarsmen didn't have special seats, they just sat on the crossbeams that made up the internal framework of the boat, or on trunks that contained their possessions. The oar holes could be covered by wood­en discs, and warships had mounts where the Vikings' shields could be lined up, adding extra protection from attacks.

The square Viking sail could be as large as 330 square feet of double-thick wool, often dyed red or with red stripes to strike fear into their enemies [source: Cohat]. The Vikings also used metal anchors and primitive navigation devices.

Next: Why were the Vikings so warlike?