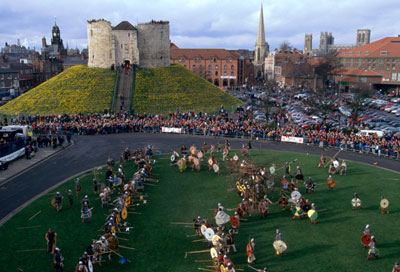 Early Viking raids were launched from settlements in Scandinavia. Following the attacks, the Vikings would return home with their plunder. They eventually began to establish trading outposts in the lands they raided, such as Ireland and England. These outposts also served as launching points for raids. The Vikings even conquered and held some of the territory they attacked. In 839, a Danish Viking conquered Ulster in Ireland, established a settlement that would one day become the city of Dublin and crowned himself king [source: Cohat]. Over time, the small Viking raiding parties grew into armies. They sailed up rivers or marched overland, striking far inland from the coastal locations they usually attacked. Vikings even laid siege to Paris and probably would have captured it had the people not paid a ransom.

The Viking army in France caused great problems for the Franks, continually raiding and besieging towns. The Frankish King Charles the Simple eventually made a deal with a Viking leader named Rollo. Under the condition that he convert to Christianity, Rollo was granted the territory now known as Normandy, which in its original form meant something like, "Land of the Northmen." Some Scandinavians settled in the area and gradually blended into the French culture that surrounded them [source: Haywood 2000].

Danish Vikings controlled about half of England from the late ninth century into the 11th century [source: Haywood 2000]. This area was known as the Danelaw. It wasn't quite a Viking kingdom -- rather, Danish laws held sway due to the influence of various Scandinavian lords. The amount of direct rulership of the Viking leaders over the region varied over the decades.

Meanwhile, Ireland was conquered, retaken, reconquered and taken again by various Scandinavian factions and Celtic peoples. Eventually, the Celts in Ireland and the Anglo-Saxons in England absorbed the Nordic people who came to live with (and sometimes rule over) them through intermarriage and adoption of customs and traditions. These people adopted Christianity readily, though the religion spread more slowly into Scandinavia itself.

In the Viking homelands, governance took the form of a primitive democracy. Each kingdom was divided into districts. Within each district, all free men met at regular intervals in an assembly called a thing. Kings, nobles, rich men, warriors, merchants and farmers all technically had an equal voice in the proceedings, which could include political decisions, land disputes and criminal trials. An elected or appointed official known as a law-speaker acted as an impartial judge to guide the meetings. However, those with more wealth and power had more influence than others, and there were few formal procedures. If a dispute could not be settled, they often resorted to duels or torturous trials known as ordeals [source: Wolf]. In an ordeal, someone might be ordered to walk on water or hold hot iron -- think of the Salem witch trials. If the person remained unscathed, he must be innocent by virtue of the gods looking out for him.

Berserkers were legendary Viking warriors who allowed themselves to be so consumed by battle-frenzy that they no longer felt pain and could strike with a power and fury that terrified anyone who faced them. It is unknown how many real berserkers existed -- they show up most frequently in Nordic sagas as powerful foils for the heroic protagonist [source: Haywood 2000]. The berserker tradition stems from earlier Germanic peoples, and often includes supernatural elements. Berserkers often wore wolf or bear pelts and were said literally to transform into such an animal when they fought.