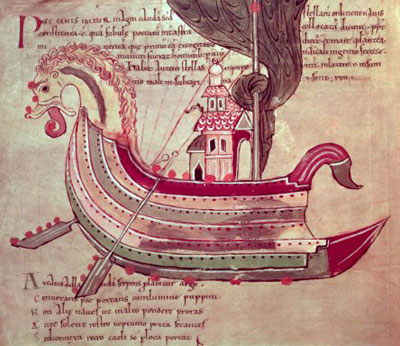 Vikings were pagans -- they worshipped a pantheon of multilpe gods and goddessess, each one representing some aspect of the world as they experienced it. Scandinavians eventually converted to Christianity, but more slowly than other peoples of Europe. There was no central church in any of the Scandinavian kingdoms, nor were any of their religious traditions consistently written down. As a result, Viking religion was highly personalized and varied from one place to another. It evolved over time to a greater extent than codified religions usually do [source: Wolf].

Central to their religion were two groups of gods, the Aesir and the Vanir. The gods lived in Asgard, a kingdom that was connected to mortal Earth (known as Midgard) by a rainbow bridge known as Bifrost. The pantheon included Odin, the primary god, Thor, the hammer-wielding god of thunder, and Frejya, the goddess of fertility and beauty. There were also evil giants, dark elves and dwarves. The gods were destined to fight against the giants and other evil forces in a battle known as Ragnarok. Norse prophecy predicted that the gods would lose this battle, allowing Asgard, Midgard and the entire universe to collapse into darkness and chaos.

Warriors who died nobly in battle could end up in Valhalla, a sort of warrior heaven where everyone gets to fight alongside Odin, die, feast and do it all over again the next day. They were escorted to Valhalla by the Valkyrie, which were sort of like warrior angels who assisted Odin. In truth, there were no female Viking warriors -- Scandinavian society was primarily patriarchal, with men holding most political and economic power.

When wealthy or powerful Vikings died, their body may have been burned on a boat along with many of their possessions, or they may have been entombed in a barrow, a large earthen chamber. In either case, pets and sometimes slaves were sacrificed and buried (or burned) along with the Viking. There is also evidence that Scandinavians offered ritual human sacrifices in religious ceremonies [source: Wolf].

Vikings didn't write down their history (except for the occasional runestone inscription) until they had converted to Christianity. Any history prior to that was passed on through an oral tradition carried on by skalds. Skalds were Scandinavian bards who recited epic poems (called sagas) recounting the deeds of famous Viking kings and lords. These poems could be incredibly long and detailed. Some of the sagas were eventually written down in later eras, but most of them are lost to history.

These are the Viking traditions, but what about that symbol most often associated with the Vikings: the horned helmet? We'll look at the military and nonmilitary technology used by the Vikings in the next section.