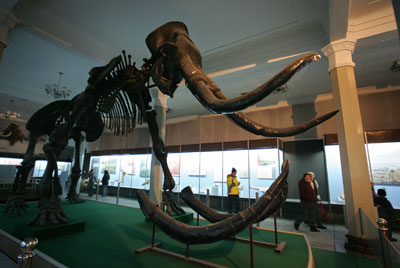 The fossilized remains of a mammoth in Mongolia. From the size of the animal, it's apparent that it took coordination and several people to slaughter a mammoth.
Frederic J. Brown/AFP/Getty Images

On the timeline of history, the Clovis people appeared out of nowhere and disappeared in the blink of an eye. Clovis sites were found throughout the southern and eastern United States. Radiocarbon dating revealed that the Clovis had a pretty short existence: They first appeared in America around 9,200 B.C. and vanished 500 years later, around 8,700 B.C.

Intense investigation into clues the Clovis left behind was launched as more artifacts were discovered. The Clovis-First theory proposes that these people came from Siberia, where hunter-gatherer tribes lived. Around the time the Clovis lived in the Americas, the world was in the middle of an Ice Age. The Ice Age lowered sea levels because so much water was frozen solid; as a result, land that's now under water was exposed. The Bering land bridge, which connects Alaska to Siberia and is now under the Bering Strait, is supposedly the passage the Clovis crossed from Siberia to Alaska. In the time of the Clovis migration, the land bridge would have been about a mile wide.

Much of Alaska and Canada were covered by a vast ice sheet, but geological evidence shows there was a recession in the ice (called the ice-free corridor) that would have allowed the Clovis to migrate through to the northern parts of the United States. From there, they traveled south and spread across the continent.

But why would the Clovis leave home for a strange, new world? The answer to this question ties into the answer about the Clovis' disappearance.

The Clovis, like other prehistoric cultures, were hunter-gatherers. They foraged for plants and hunted animals for food. There's evidence at Clovis sites that they slaughtered enormous game like mastodon and mammoths with their unique projectile points. These big game species had far-flung migratory patterns. The Clovis would've been dependent on these animals, and where the mastodon and mammoths migrated, the Clovis followed. So it's possible that the Clovis' food sources led them into North America.

The prevailing theory among Clovis-First adherents is that the Clovis' dependency on mammoths and mastodons led to their downfall. Theorists believe that the Clovis people either overestimated the abundance of their food sources or weren't diversified enough in their diets. The Clovis may have overhunted mastodons and mammoths, leading to both species' extinction in North America and the eventual extinction of the Clovis.

This Clovis-First theory is supported by archaeological evidence. For decades, archaeologists and anthropologists who subscribed to the Clovis-First theory so ardently believed that this early culture was the first to settle the Americas that they jealously guarded their ideas and evidence. A "Clovis barrier" [source: Rose] shielded by the scientists who formed a sort of "Clovis police" [source: UNL] discounted any other theory that placed other cultures in the Americas earlier than the Clovis.

But evidence from around the world pokes holes in the Clovis-First theory. At least one site suggests there's another explanation for the presence of the first humans in the Americas. In 1998, a final study of a site excavated near Monte Verde, Chile, broke through the Clovis barrier. Find out about the Monte Verde site and how it changed the outlook of American prehistory on the next page.