Revisionism Through Social and Theoretical Lenses 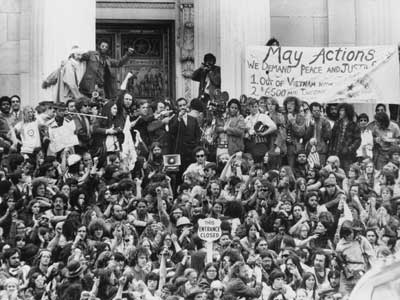 A crowd protests the Vietnam War outside the U.S. Capitol building in 1971.
Dave Watt/Getty Images

Historians refer to the years immediately following World War II as the age of historical consensus [source: Foner and Garraty]. A strong sense of patriotism and unity dominated the historical framework during that time. Then, that stability began to crack apart with the turmoil and uncertainty of the 1960s. No longer was the country sitting victorious after succeeding in World War II. The combination of the protracted war in Vietnam and the struggle for equality throughout the Civil Rights movement changed the tone across the United States radically. Technicolor Uncle Sam and victory gardens were replaced by race riots and student protests. Revisionist historians understood that these events affected groups in different ways, which reshaped the overall narrative of U.S. history.

Six main occurrences set the stage for this development:

How did these second-wave revisionists alter the narrative? Instead of looking just at the history of the United States as one overarching theme of destiny and triumph, they began to look at it through previously untouched lenses. They inspected the events of history as they related to seemingly marginalized segments of society, such as women and minorities. Four major types of social lenses that gained more attention from the 1960s onward are political, economic, racial and sexual:

But like a diligent journalist editing an article, historians re-examining past events may discover errors or misinterpretations. Advances in technology and collaboration with scholars from other fields have also helped correct the basic facts we learn about history.